[Press Release] International Environment NGOs Submitted Petitions Against the Construction of Henoko US Military Base Both in Japan and the US. 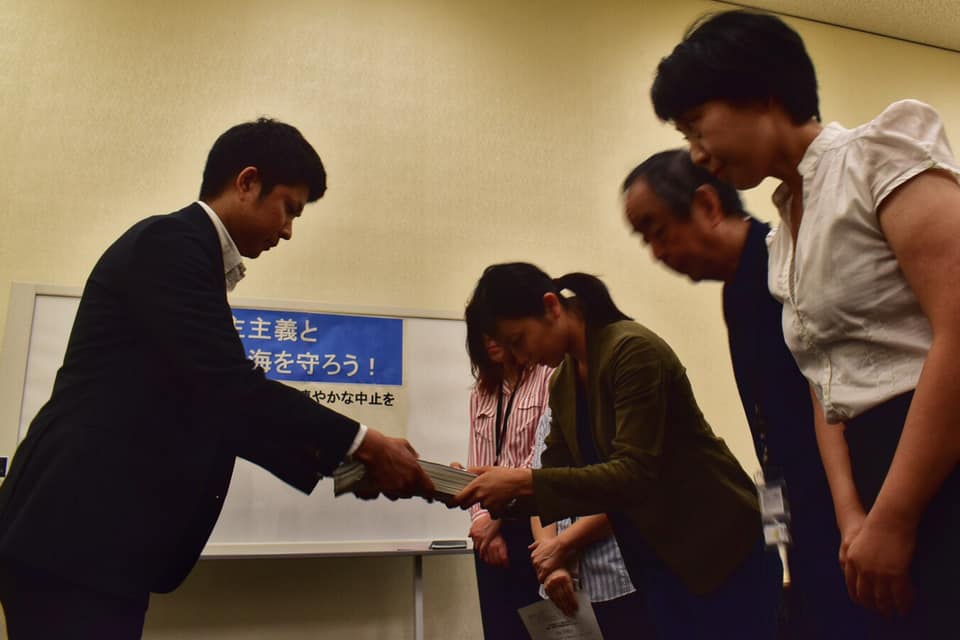 On June 24th, Friends of the Earth Japan, Friends of the Earth U.S. and members of the Protect Henoko and Takae! NGO networks have submitted a petition with names of 19,406 citizens to Prime Minister Shinzo Abe and President Donald Trump and other related decision makers, calling for the swift halt of the construction of the Henoko US Military Base. The staff in charge has collected the petition.


In the petition, it is pointed out that, at the referendum that took place in Okinawa on February 24th citizens overwhelmingly voted against the construction of the military base. Citizens have expressed that the Japanese and US governments shall stop all unnecessary constructions, thereby protecting democracy and precious Okinawan coral reefs.


Kanna Mitsuta, Exective Director of Friends of the Earth Japan, has commented, "If the Japanese government wants to reduce the burden of US bases on Okinawan citizens and eradicate the dangers surrounding Futenma US Air base, one should do so by making efforts for the return of Futenma to Japan. Instead the Japanese government is ignoring the voices of more than 70% of the Okinawans, while dumping landfill and destroying on one of the most ecologically diverse waters on earth".


Yuki Sekimoto, a member of the Protect Henoko & Takae! NGO Network has also stated, "military actions should never be prioritized over public opinion, the environment and ecology, and people's lives".


Of the 19,406 signatures on the petition opposing the construction of Henoko US military base, 2,808 people have signed in Japan and 16,598 have signed in the United States. Other than that, people of 57 other countries including France, Luxembourg, Georgia, Bangladesh, Switzerland, Sweden, Taiwan, Italy, Germany, Spain, Austria, Australia, India, Korea, New Zealand, Brazil, UK, Belgium, Hungary, Netherlands, Slovenia, Finland, Argentina, Costa Rica, Chile, Malaysia have also signed the petition, showing an international regard for the construction of Henoko US military base.