"When the dam was built we lost our farm land, and on top of that we couldn't pan for gold in the river any more either. We've lost our livelihoods."
- Resident of the San Roque Dam area, The Philippines 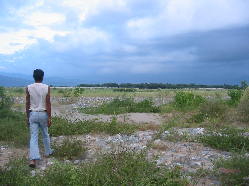 Many residents are angry and concerned about the environmental destruction and negative impact on their lifestyles caused by dams built with Japanese funding.

Since emerging as a global economic power, Japan has been a substantial donor of foreign aid in developing countries. In a way this aid has helped developing countries with infrastructure development. The majority of this aid, however, focuses on large-scale infrastructure development such as dams, roads and power plants. These projects can lead to serious environmental destruction and social problems. In addition, private-sector projects receiving financial support to back the overseas presence of Japanese businesses have been identified as causing the same type of problems.

In the latter half of the 1980s, construction of the Narmada Dam (India), planned by the World Bank and Japanese Official Development Assistance (ODA), became highly controversial and drew a strong protest movement.

FoE Japan tried various approaches to increase awareness of the issue in Japan, while simultaneously promoting the efforts of overseas organizations working toward environmental conservation and human rights. The movement grew into an international campaign, and as a result the World Bank and Japanese ODA withdrew from the Narmada Dam project.

There are many examples in which problems were solved or situations improved because of the efforts of citizens and NGOs. These kinds of problems, however, are endless. We believe it is imperative that citizens monitor projects, make people aware of the problems, and call for improvement from financing organizations, governments and businesses.

To avoid causing the same problems again, there is a need not only for responses to individual projects, but for improvement in policymaking and systems. Japanese Export Credit Agencies (ECAs) and development assistance agencies previously lacked the adequate implementation systems and structures to give proper consideration to socio-environmental issues. FoE Japan has encouraged governmental institutions to establish high-quality environmental guidelines based on survey and analysis of individual projects.

When the Japan Bank for International Cooperation (JBIC) and the Japan International Cooperation Agency (JICA) were formulating environmental guidelines, FoE Japan participated as a committee member, making recommendations on what prevention measures should be taken to avoid causing problems in the future. In addition, since guidelines were set, FoE Japan has called for improvement on the operation side to ensure that the guidelines are actually effective and relevant for project problems.

FoE Japan cooperates with overseas NGOs in international campaigns to submit policy recommendations to international financial institutions such as the World Bank and the Asian Development Bank, and toward reform of ECAs.

It is not uncommon for large-scale development projects financed by government agencies and international financial institutions to be implemented from the top down without adequate consideration of the necessity of the project itself, as they tend to reflect the interests of certain stakeholders 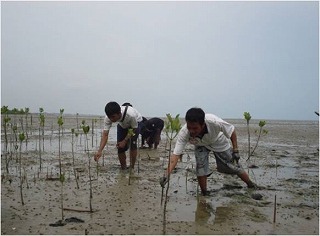 Does this type of development aid really help the local people living in developing countries? FoE Japan believes that it is important for aid in developing countries to meet the communities' needs, and for communities to lead the implementation of these projects. FoE Japan supports mangrove restoration and agroforesty projects in Indonesia as community-led pilot projects.

Today in developing countries, response (adaptation) to the effects of climate change such as the rise in sea level and the increased frequency in floods and droughts is growing ever more important. Adaptation projects might bring to mind public works like dike and dam building for many people, but FoE Japan actually supports projects that aim to strengthen the understanding of local community members regarding the importance of adaptation, and work toward independent management of the projects by the communities themselves.