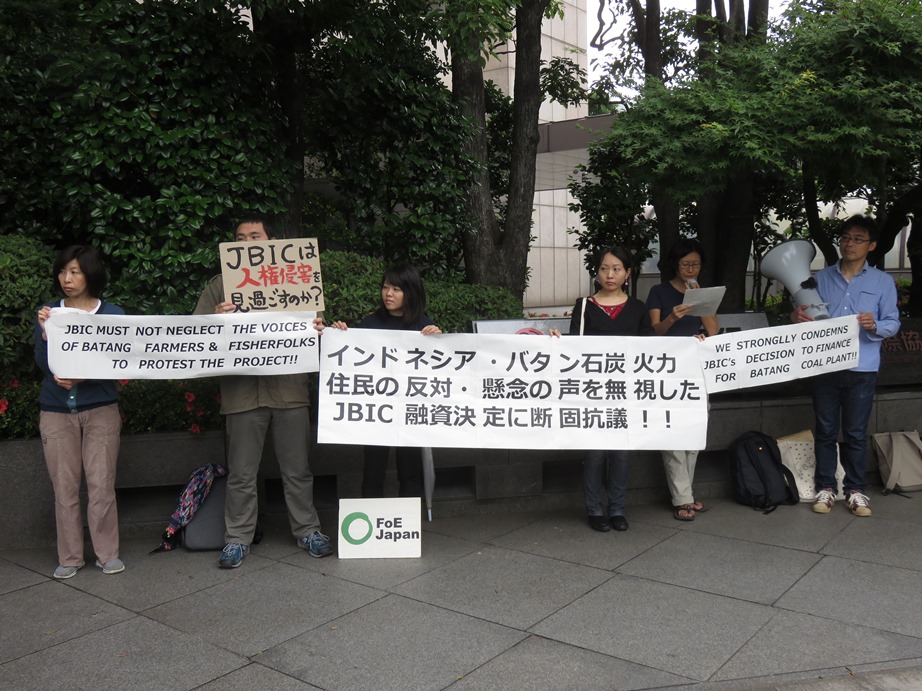 Six months ago, JBIC approved funding for one of Southeast Asia’s largest coal-fired power plants in Batang in Central Java, which is already having terrible negative social and environmental impacts, and will make a massive contribution to climate change.

French Bank Crédit Agricole also wants to join JBIC in funding the coal power plant in Cirebon and the Tanjung Jati B power plant. This is in spite of a very recent public commitment made by Crédit Agricole to stop providing finance to new coal plants. Civil society groups from across the world, including Friends of the Earth France, Banktrack and Oxfam France, have criticized the double standards of Crédit Agricole in making new climate commitments a few weeks before COP22 in Marrakech, whilst continuing with its coal finance business as usual. They argue Crédit Agricole must not finance these two damaging power plants.

Almost everyday local people have been protesting in Cirebon, complaining of serious damage caused by the existing coal power plant. There have been protests in front of the Japanese embassy and local people submitted a formal complaint against JBIC at JBIC office in Jakarta last week, demanding the closure of the existing Cirebon plant and the rejection of funding for its expansion.

“Local communities have been persistently protesting the proposed power plant extension in Cirebon and other Japanese funded coal-fired power plants in Indonesia. We don’t want Japan or France or anyone to fund this destruction in our country. The proposed power plants in Indonesia are not to serve the needs of the poor who are without energy access. It is to serve the companies instead. Indonesia does not deserve, and cannot afford, a future built on coal. Don’t lock Indonesian futures into the dark ages with dirty coal,” said Arif Fiyanto, Greenpeace Indonesia.

“The Japan Bank for International Cooperation (JBIC) is 100% funded by the Japanese government, and it uses our public money to fund destruction abroad. Already this year they approved the devastating Batang coal-fired power plant in Indonesia. Their policies are unacceptable. We demand that they must stop funding these coal power plants in Indonesia and elsewhere,” said Ayumi Fukakusa of Friends of the Earth Japan.

“There have been recent wins with French banks in the fight to stop them funding coal. However Crédit Agricole says it is still committed to funding the extension of the Cirebon power plant as well as the Tanjung Jati B power plant. It is not longer acceptable for them to fund any coal, at a time when we are hurtling towards climate catastrophe. We demand they stop the finance of both these power plants right away,” said Armelle Le Comte, Oxfam France.

“Stopping coal and other forms of dirty energy and supporting the communities who are leading these fights on the ground will go a huge way towards stopping the climate crisis. Not only are these projects harming the climate, they are harming communities and workers, grabbing land, polluting the air and water. At the same time, we are facing a crisis of energy access, since 1.2 billion people across the planet do not have access to electricity. We need energy for people, not corporations and elites. We need an energy transformation now,” said Dipti Bhatnagar of Friends of the Earth International.

For more information you can contact our spokespersons below: