Indonesian Villagers Filed the Objection against JBIC
“Cirebon Coal-fired Power Plant has made our life worse”
Don’t finance for the Expansion Plant!

On November 10, 2016, three villagers affected by "Cirebon coal-fired power plant project in West Java, Indonesia" (*1) handed their objection to the Japan Bank for International Cooperation (JBIC) at its Representative Office in Jakarta. They also took their protest action in front of Japanese Embassy, calling on JBIC not to decide its loan for the expansion project in Cirebon which is slated to commence the construction within this year or early next year. 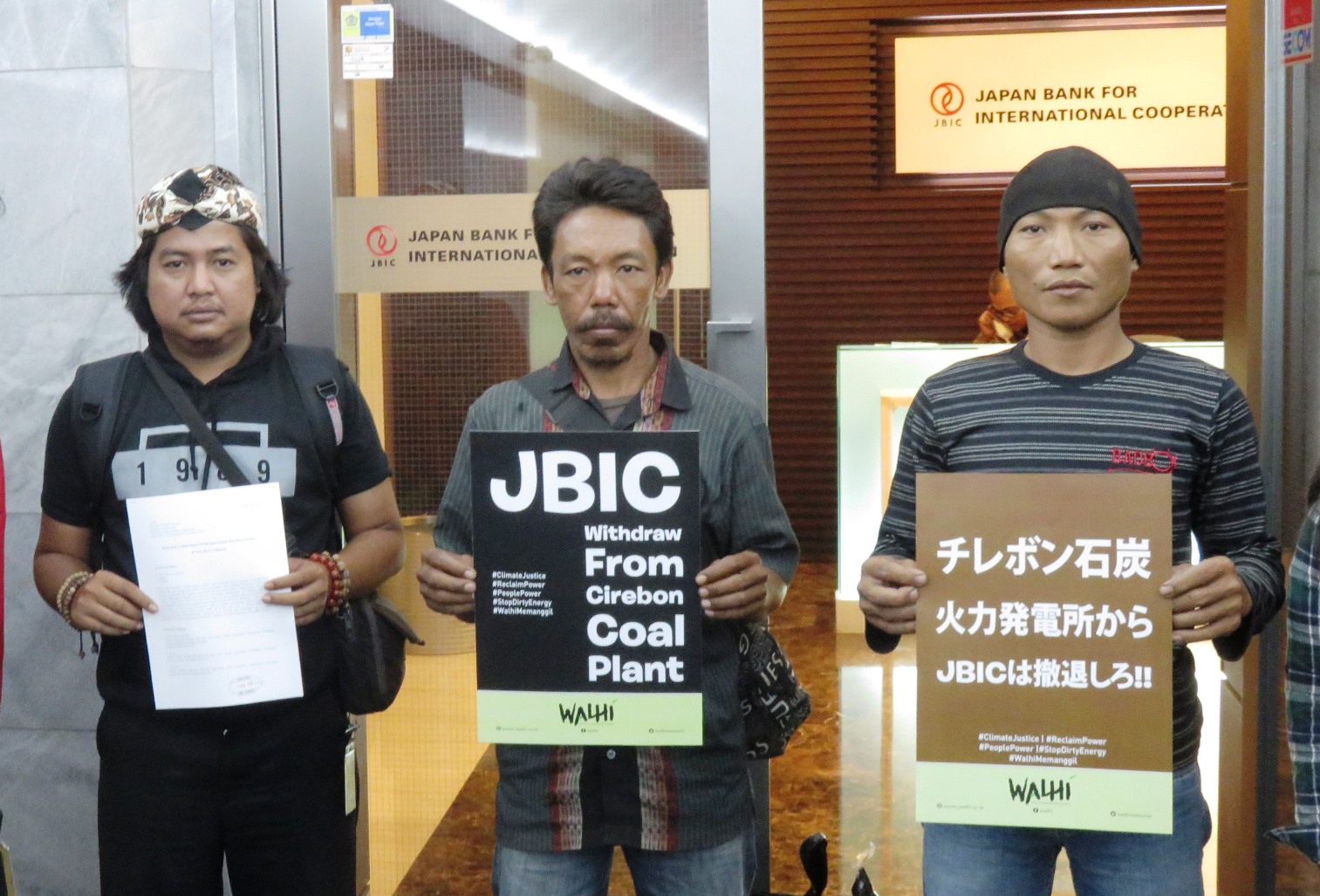 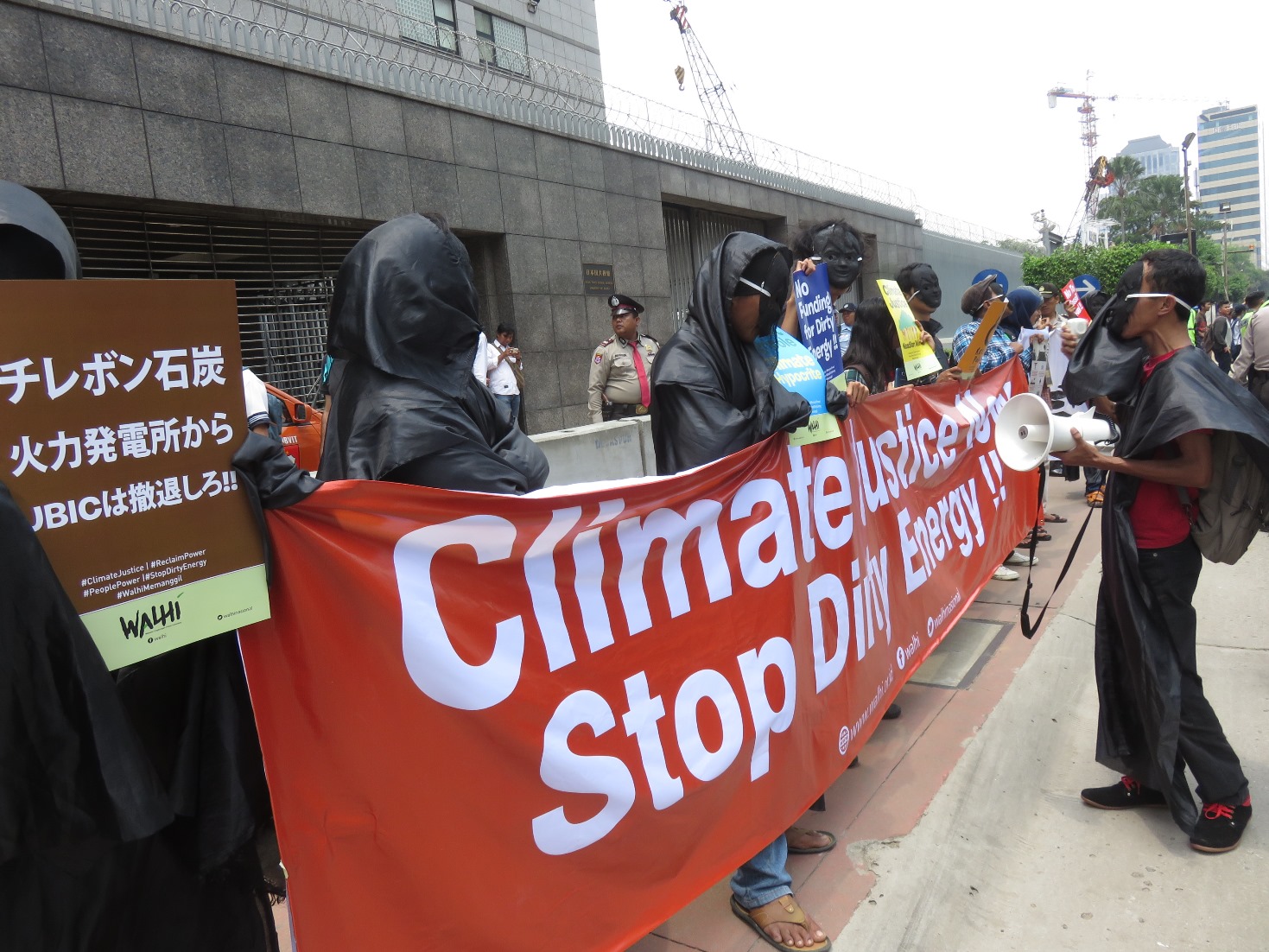 In the Project, the Unit 1 power plant (660 MW, invested by Marubeni), for which JBIC provided its loan, has already caused serious damages to the community’s livelihood, such as small-scale fishing and salt making. In addition, the expansion or Unit 2 power plant (1000 MW, invested by Marubeni and Chubu Electric Power) has been criticized for the issue of land acquisition and the illegality of its environmental permission.

In the Objection, the villagers claim that their life has become more difficult than before the Project when they used to rely on various income sources for their life, saying “Currently, they can catch only less fish or can pick no shellfish, because the construction of the Unit 1 power plant destroyed environment around the coastal area,” and “The quality of salt has been getting worse, because some black dusts from the coal stockpile are flying over our salt pans.” Also, despite of these serious impacts, it is pointed out that any compensation or livelihood restoration measure has not been provided for most community members by the project proponent, and even though provided, those measures were not effective enough to restore their livelihood.

JBIC has been informed about these claims through the villagers’ letters. However, JBIC has repeatedly answered that no problem is found in the Project. In this regard, the villagers’ objection points out some violations against “JBIC Guidelines for Confirmation of Environmental and Social Considerations” (the Guidelines); that is, JBIC has never “conducted its own investigations” on those claims, and the project proponent has also failed to “carry out the investigation of those specific claims through transparent and accountable processes”. In addition, the villagers state in their objection that JBIC must be responsible for the negative impacts caused by the Unit 1 power plant project on our community, given that it would be difficult for the project proponent to push through the Project - Unit 1 power plant without the JBIC’s loan. Further, they request that the project proponent stops the operation of the Unit 1 power plant and JBIC doesn’t decide to make a loan for the Unit 2 power plant, until JBIC conducts its own investigations using external experts and the appropriate actions are taken at the local level, in order to ensure that more damages related to the Project are prevented among the community.

Amid COP 22 in Marrakech, Japan has come under international scrutiny again, as the country is still pushing through the export of and the investment finance for coal-fired power plants, which are the main emission sources of CO2.

Japanese government and JBIC must sincerely accept the fact that the villagers affected by the Cirebon Coal-fired Power Plant Project have filed the objection, must take action to solve the existing problems, and must immediately stop considering its finance for the expansion Unit 2 power plant, listening to the local people’s concerns and the international society’s call.

(*1) Cirebon Coal-fired Power Plant Project in West Java, Indonesia
The Cirebon Project - Unit 1 with a capacity of 660 megawatt has been developed by a consortium PT. Cirebon Electric Power (CEP) consisting of: Marubeni (32.5%), Korea Midland Power (27.5%), Samtan (20%), and Indika Energy (20%). PT. CEP signed a 30-year power purchase agreement (PPA) with the Indonesian state power utility Perusahaan Listrik Negara (PLN). The project has cost USD 850 million. JBIC, the Export-Import Bank of Korea, and private banks made a loan agreement with CEP with co-financing USD 595 million (USD 214 million from JBIC). The Unit 1 Plant started its commercial operation in July 2012.
In the Cirebon Project - Unit 2 with a capacity of 1,000 megawatt, Marubeni (35%), Indika Energy (25%), Samtan (20%), Korea Midland Power (10%) and Chubu Electric (10%) have invested in, and have established PT Cirebon Energi Prasarana (CEPR). CEPR entered into a 25-year PPA with PLN. The expansion project is estimated to require an investment of USD 2.1 billion, for 80 percent of which JBIC, the Export-Import Bank of Korea, and Japanese and French private banks are considering their co-finance. At the local level, PT. CEPR has been pushing through the construction of access road and land clearing before the commencement of main construction. The Unit 2 Plant is expected to be operational in 2020.