In a letter (English / Japanese translation) released on May 19, 2016, in Tokyo, 80 groups urged Japan to announce a commitment at the G7 summit to end all fossil fuel financing by 2017. Such a commitment would align with latest scientific research, which shows that no new fossil fuel power plants can be built after 2017 if we are to have a 50 percent chance of avoiding the worst impacts of climate change. 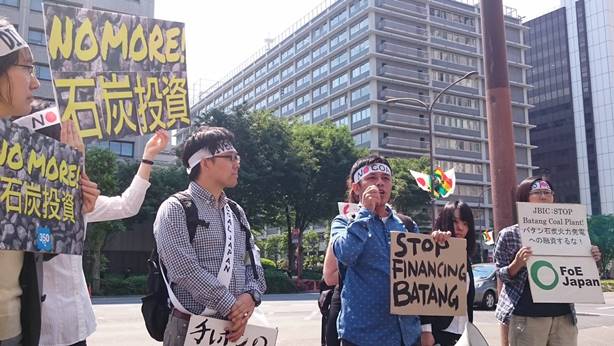 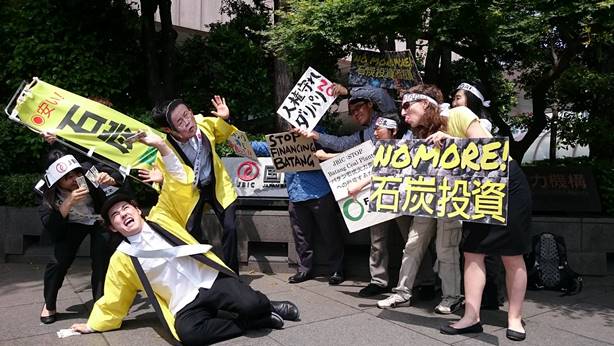 (Photos) Before submitting the petition letter to Ministry of Finance (MoF) and Japan Bank for International Cooperation (JBIC), activists from various countries performed "No More Coal" Action in front of MoF and JBIC, demanding JBIC to reject its finance for the controversial Batang coal plant project, Indonesia.

This letter builds on international protests in March and April when activists rallied to demand that Japan stop financing dirty energy projects like the Batang coal-fired power plant, which has been plagued by human rights abuses. These protests will continue this month to call out Japan’s out-of-touch plans to build 49 new coal plants domestically and finance many others abroad.

Japan’s government has continued to move backward by supporting both fossil fuel projects at home and across the globe. This is despite Japan’s wealth of renewable resources. Japan’s financing has included liquefied natural gas projects throughout the world, including the United States and Indonesia. In addition, Japan provided over US$20 billion in coal financing abroad between 2007 and 2014, making it the world’s number one financier of overseas coal.

Yuki Tanabe, a program coordinator at Japan Center for a Sustainable Environment and Society (JACSES) stated that, “It is a time to make G7’s public finance flows consistent with the goal of 1.5-2 degree Celsius agreed in Paris. As a chair of the G7 Summit, the Prime Minister Abe should take a strong leadership towards the dramatical change.”

“Japan’s own government research shows that the country is rich in clean, renewable resources,” said Kate DeAngelis, international policy analyst at Friends of the Earth U.S. “Instead of taking advantage of these resources and encouraging the rest of the world to transition to renewables, Japan has doubled down on dirty coal and gas. Hosting the G7 provides Japan with an opportunity to change course and commit to replacing its dangerous fossil fuel financing with resources for renewables.”

"Indonesian people have severely suffered from climate change. We do not need any more coal fired power plant that will not only exacerbate the climate but will also take livelihoods of the small farmers and fishers that depend on their land and sea to continue their lives. We urge Japan government to stop making profits out of the suffering of Indonesian people, withdraw its financing from Batang coal plant, and shift their investment to renewable energy," said Nur Hidayati, national executive director of WALHI - Friends of the Earth Indonesia.

"It's undeniable that the momentum toward a 100 percent clean energy economy has continued to accelerate in the months since the Paris Agreement was adopted, and 175 nations, including Japan, joining together on Earth Day 2016 to sign the agreement reaffirms that the world is ready to tackle the climate crisis," said Maura Cowley, associate director of the Sierra Club's International Climate and Energy campaign. "There's no excuse for Japan or any other developed country to continue to push for the world's dirtiest energy source when cheaper, safer, and more modern energy sources -- like wind and solar -- are literally all around us."


Re: Japan Must Commit to Ending All Fossil Fuel Financing

The undersigned groups urge Japan to announce a commitment at the G7 meeting to stop fossil fuel financing. Such a commitment should provide a clear mandate to Japanese government agencies to immediately begin phasing out financing for new fossil fuel and nuclear projects by no later than 2017 - the year at which scientists say no new fossil fuel power plants can be built to avoid the worst impacts of climate change. This is essential to demonstrate to the world that Japan's endorsement of the Paris Agreement is more than words and that Japan is willing to do its fair share of climate action.

Japan must immediately begin to shift financing away from fossil fuels and nuclear power towards clean, sustainable renewable energy, such as wind and solar, based on the local community's Free, Prior and Informed Consent (FPIC). Domestically, Japan has a wealth of renewable resources that it should use to transition away from fossil fuels, and its own studies have shown that Japan has 1,900 GW of wind energy resources alone. Japan is falling behind other countries, such as China, that have greatly increased their renewable capacity.

Internationally, Japan has a history of encouraging continued dependence on fossil fuels, even as the climate science and deadly climate impacts have shown the urgent need to keep fossil fuels in the ground. This includes Japanese financing of liquefied natural gas projects throughout the world, including the United States and Indonesia. In addition, while the United States and France have placed limitations on their financing of coal projects abroad, Japan has provided over US$20 billion in coal financing abroad between 2007 and 2014, making Japan the world's number one financier of overseas coal. It is time for Japan to support strong implementation and improvement of the OECD restrictions on coal financing, as well as advocate for restrictions on other fossil fuels and greater support for cutting edge, clean and sustainable energy alternatives.

As the President of the G7, Japan has an obligation to be a leader, not a laggard on climate. First, Japan must stop subsidizing fossil fuels overseas. Prime Minister Abe's government should reject support for dangerous fossil fuel projects, including the Yamal LNG, which would devastate this sensitive area and take land from nomadic herders; and for the Batang coal-fired power plant in Central Java, Indonesia, and the Darlipali coal-fired power project in Odisha, India, which are both rife with human rights abuses. On the home front, it is time for Japan to reject the fossil fuel and nuclear technologies of last century and instead embrace the clean and sustainable energy future that will reestablish Japan as a global technology leader. Initiating new fossil fuel projects in 2016 risks locking in damaging carbon pollution for decades. As Japan gets ready to host this year's G7 summit, the world is watching. It is time for Japan to lead or at least take responsibility for its emissions.

This letter is signed by 80 organisations, including those working at international and regional levels plus organisations working nationally in 39 countries.

* Batang Coal-fired Power Plant Project, Central Java, Indonesia
Two Japanese companies, J-POWER and ITOCHU, have already decided to invest in the project. Japan Bank for International Cooperation (JBIC) is currently considering its finance for the project. The loan amount is allegedly around US$ 2.1 billion. If built, the power plants (2,000 MW) will be one of the biggest coal-fired power plants in Southeast Asia. See more details (only available in Japanese) https://www.foejapan.org/aid/jbic02/batang/index.html