Friend of the Earth Japan, Japan Center for a Sustainable Environment and Society (JACSES), Kiko Network, and the other Japanese Civil Society Organizations (CSOs) took the urgent protest action in front of Japan Bank for International Cooperation (Headquarter office in Tokyo) on April 1, 2016 regarding the Batang coal-fired power plant in Central Java, Indonesia (2,000 MW. The total project cost is around USD 4.5 billion. ITOCHU Corporation and J-POWER has been investing in.), for which JBIC (100 % financed by Japanese government) is considering its huge finance of around USD 2.1 billion. We urged JBIC to reject financing for the Batang project according to the JBIC Guidelines for Confirmation of Environmental and Social Considerations (the Guidelines), as the project has repeatedly caused the human rights violations. 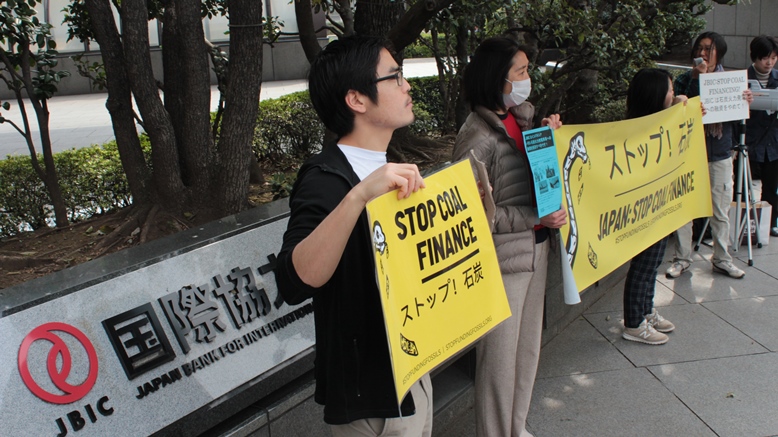 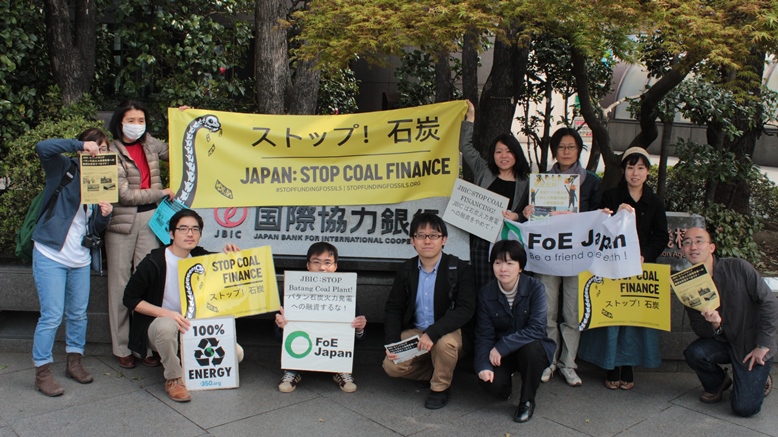 In addition, an international petition signed by 230 CSOs from 42 countries (English / Japanese translation) was handed to JBIC, to call on Japanese government and JBIC not to finance the huge public finance for the Batang project, where the project proponents have failed to ensure the social acceptability at the local level and have been trying to proceed the project only in an oppressive way. 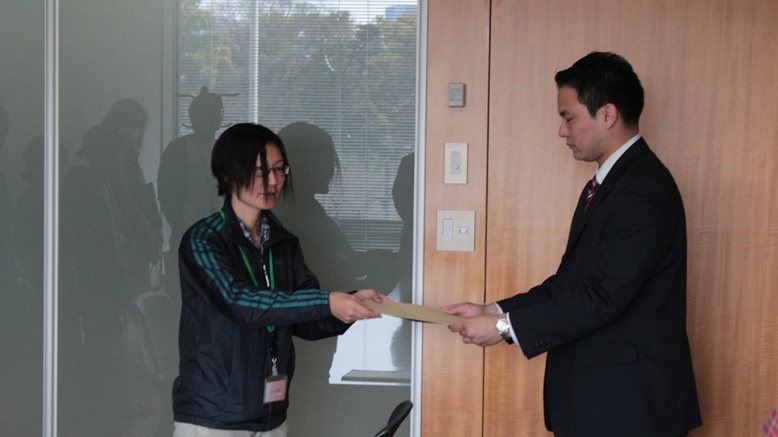 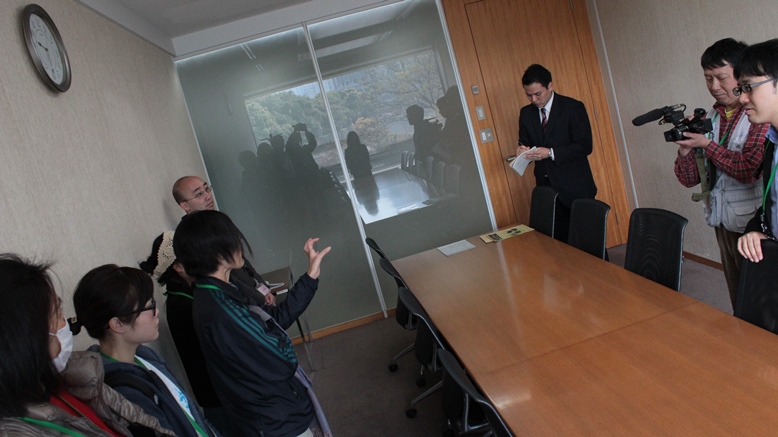 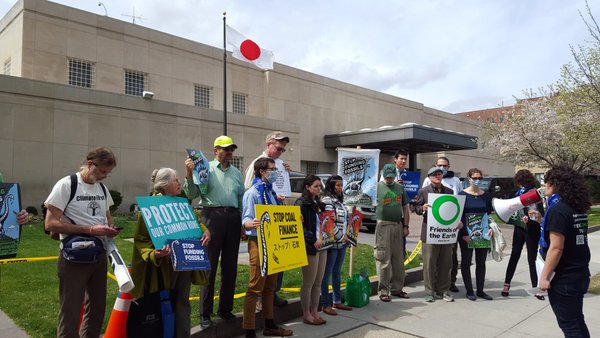 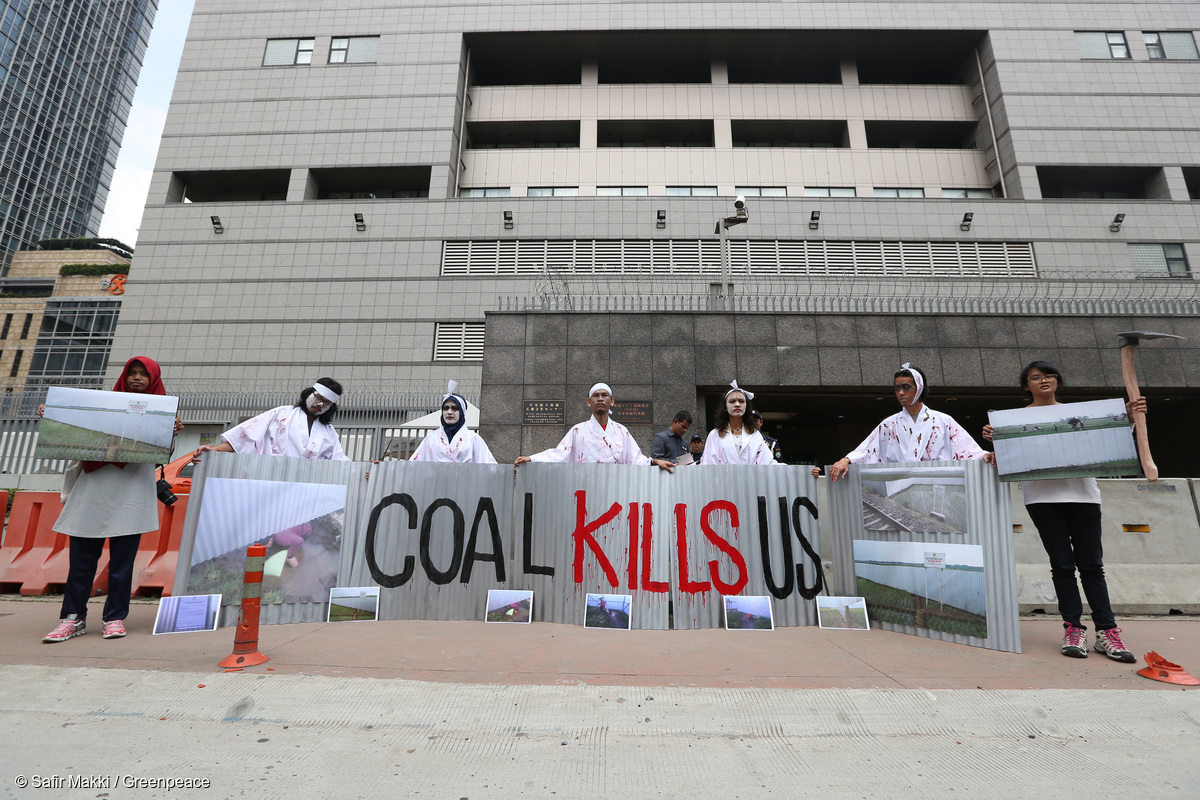 The companies and Indonesian government have applied the law for compulsory land acquisition, and have already declared the one-sided termination of all landowners’ ownership, ahead of its financial closure deadline on April 6, 2016. Some 60 landowners have been refusing to sell their land and were tilling their farmland. However, the project proponents completely blockaded all the access to the unsold farmland on March 24, 2016. This means that the farmers’ means of livelihood have been deprived of.

Local villagers have fiercely resisted the Batang project for more than four years. The project would harm their rice fields, destroy the rich fisheries of the area, and emit toxic air pollution. As a result of their opposition, local community members have been subjected to violence and intimidation at the hands of the army, the police and the thugs.

JBIC has started its environmental review on the Batang project since 2013. JBIC must refuse financing for the project now according to the JBIC Guidelines, as there has been no “social acceptability” and no improvement of human rights situations at the local level.

On the occasion of Prime Minister Abe’s state visit to the United States, the undersigned groups from across the world assert that we are deeply concerned about the role that Japan has been playing in encouraging coal-fired power development, especially in Indonesia. Japan has continued to slow down progress toward shifting financing away from fossil fuels towards clean and sustainable renewable energy sources, such as wind and solar. As the leader of the G7, it is especially important that Japan no longer be a laggard, but instead become a leader in encouraging the shift away from dirty energy to catalyze the necessary transition that will prevent the worst impacts of climate change.

Japan has a history of encouraging continued dependence on coal even as the science and deadly climate impacts have shown the urgent need to keep fossil fuels in the ground. From 2007 to 2014, Japan provided over US$20 billion in coal financing abroad. Japan has often resisted any limitation on export credits for coal projects. While the United States, France and other countries have placed limitations on its financing of coal projects abroad, Japan remains the world’s number one supporter of overseas coal to the detriment of the planet and people. Initiating new coal-fired power plants in 2016 risks locking in damaging carbon emissions for decades to come, at a time when the world has agreed in the Paris Agreement that every country must play their part in dramatically decreasing emissions.

One example is the Batang coal-fired power plant in Central Java, Indonesia. Even though the project owners have failed to ensure “social acceptability” for the project in an appropriate manner and have blocked landowners and farmers from the land they depend on for their livelihood without their agreement, the Japan Bank for International Cooperation (JBIC) has so far failed to reject financing for the project. Coal-fired plants cause grave damage to the climate, but they are burden local communities with millions of dollars in negative health impacts and shortened life expectancies. In light of the negative environmental, social, and climate impacts, and the human rights violations associated with the project, we strongly urge JBIC to reject financing for the project ahead of its financial closure deadline on April 6, 2016.

The project proponents and the Indonesian government have failed to implement the appropriate environmental and social considerations according to the JBIC Guidelines. Late last year, an Indonesian state-sanctioned but independent Human Rights Commission even warned the Japanese government to review human rights violations surrounding the land acquisition process. The Japanese government and JBIC must immediately urge the project proponents to ensure free access to the unsold farmland, to prevent any unnecessary conflict and so that the farmers can maintain their livelihoods.

Local communities in Indonesia have been subject to violence, intimidation, and human rights violations. This trend is seen around the world, with tragic consequences: March 2016 has witnessed the murder of environmental defenders Berta Caceres and Nelson Garcia in Honduras, and Sikhosiphi Rhadebe in South Africa. On the occasion of Prime Minister Abe’s state visit to the United States, the international community strongly asserts that intimidation and murder of local communities is unacceptable. Japan and JBIC risk enabling this behaviour if they were to move forward with financing for Batang.

The JBIC Guidelines encourage JBIC to deny financing for a project where a project proponent fails to undertake appropriate environmental and social considerations. Since clear violations of the Guidelines have occurred at Batang, JBIC should reject financing for the project ahead of the financial closure deadline for the project on April 6, 2016.

This letter is signed by 230 organisations, including those working at international and regional levels plus organisations working nationally in 42 countries.

* Batang Coal-fired Power Plant Project, Central Java, Indonesia
Two Japanese companies, J-POWER and ITOCHU, have already decided to invest in the project. Japan Bank for International Cooperation (JBIC) is currently considering its finance for the project. The loan amount is allegedly around US$ 2.1 billion. If built, the power plants (2,000 MW) will be one of the biggest coal-fired power plants in Southeast Asia. See more details (only available in Japanese) https://www.foejapan.org/aid/jbic02/batang/index.html