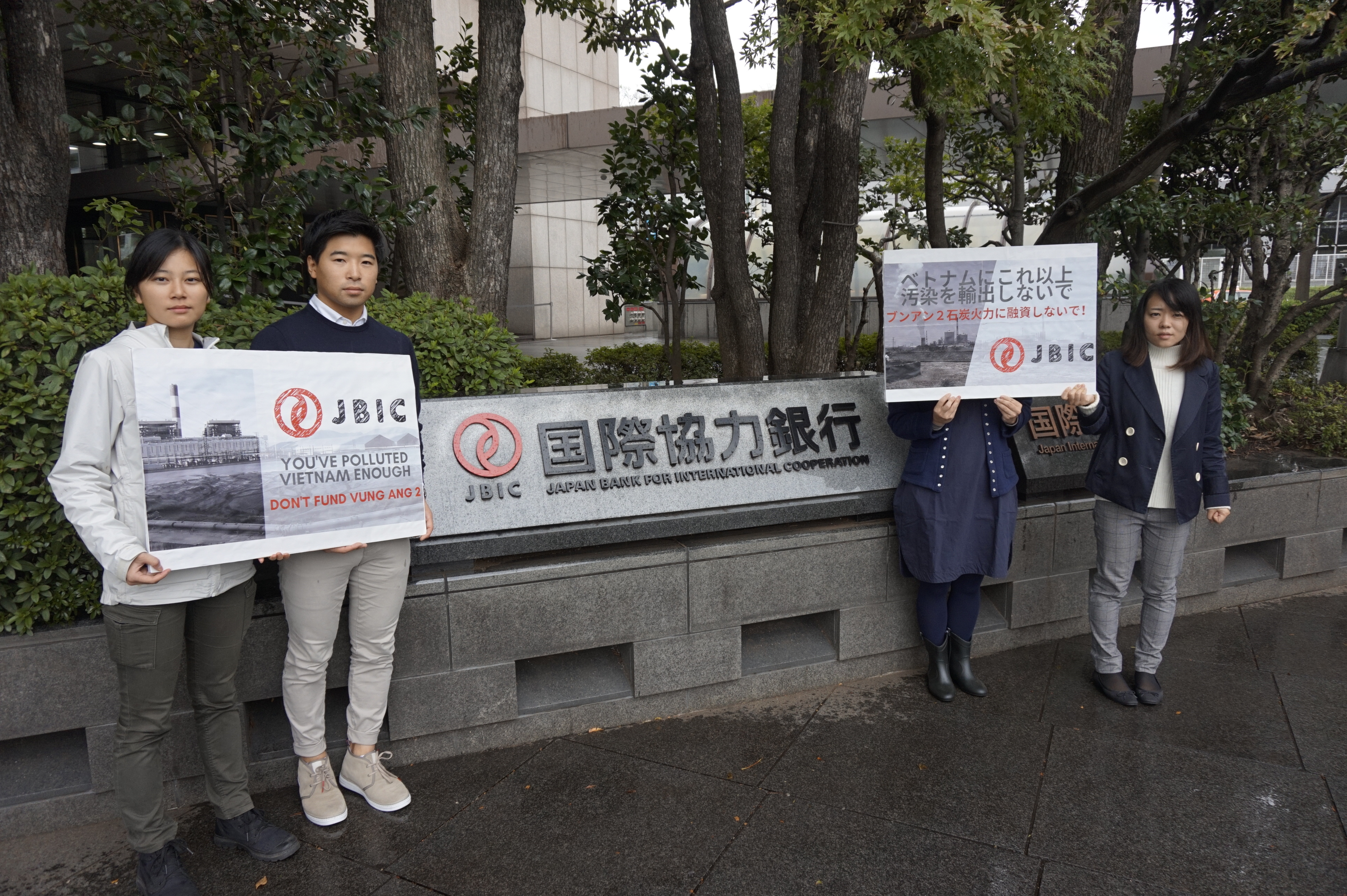 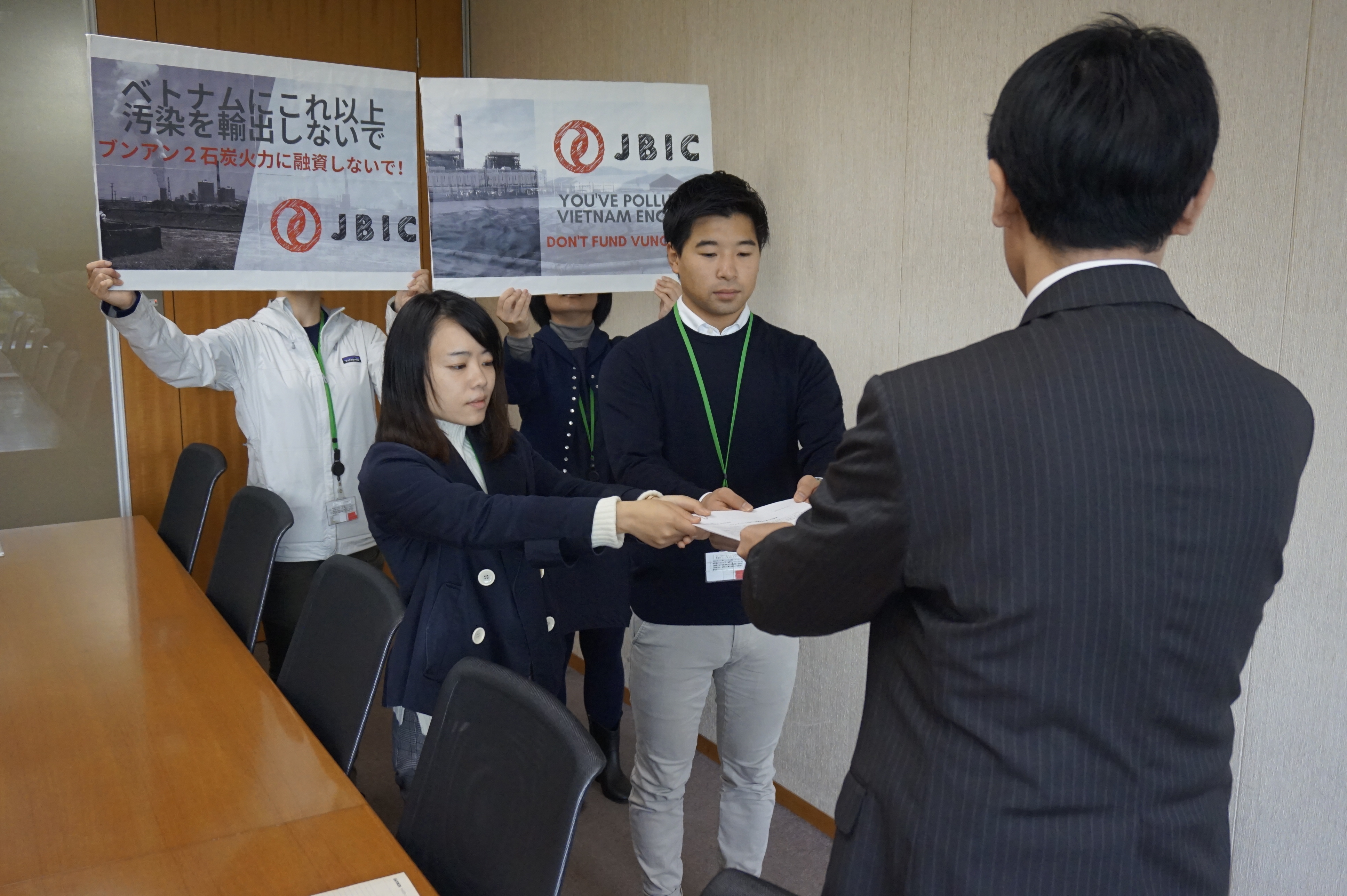 Today, a letter signed by 30 organizations from various countries was submitted to the Japan Bank for International Cooperation (JBIC) – a Japanese public financial institution demanding that JBIC not finance the Vung Ang 2 coal-fired power plant and all other new coal projects. Communities in the Vung Ang area already suffer from severe pollution from existing power plants and factories.

Ayumi Fukakusa, campaigner at Friends of the Earth Japan comments, “The impact of climate crisis is already apparent in Japan. Phasing out of coal is more than needed but Japan is exporting coal until today. Japan should not invest in coal but support local communities with sustainable and clean energy.”

Bernadette Maheandiran, legal analyst from Market Forces based in Melbourne, stated “Vung Ang 2 threatens the health and livelihoods of local communities, and is a carbon bomb when the world needs it least. In addition to damaging Japan's global reputation, this project risks becoming a stranded asset, given the falling cost of renewable energy in Vietnam. JBIC should rule out funding this project immediately.”

Refer to the letter for more details.


JBIC and major private sector banks are expected to provide co-financing for construction of two generating units (total 1,200 megawatts) at the Vung Ang 2 coal-fired power plant in the economic zone of Hà Tĩnh Province in central Vietnam[1].Major insurers are also expected to provide underwriting. This project would be implemented by OneEnergy Limited, a joint venture between Diamond Generating Asia Limited (a 100%-owned subsidiary of Mitsubishi Corporation) and CLP Holdings Limited (headquartered in Hong Kong).

We the undersigned environmental groups have many concerns regarding this project, as outlined below, and request that JBIC not provide any further financing for new coal-fired power generation projects, including Vung Ang 2.

Increasing damage from climate change
Around the world and in Japan as well, the impacts of climate change are becoming increasingly serious. That is clear for all to see. In September this year, Typhoon Faxai caused enormous damage, most seriously in Chiba Prefecture. Even before people recovered from that disaster, super-typhoon Hagibis struck Japan in October, causing more extensive damage over a wide area. Humanity has only limited time to slow the escalation of damage from climate change, and one thing we must do is to quickly phase out coal-fired power generation, as it is a huge source of greenhouse gas (GHG) emissions.

It is clear that any construction of new coal-fired power plants is not consistent with the 1.5 degrees Celsius target of the Paris Agreement, and in fact, to achieve the 1.5 degree target it is necessary to phase out existing coal-fired power plants. Japan’s long term climate change policy (Long Term Strategy under the Paris Agreement), which the government announced earlier this year, states that “the Government will promote the development and investment of energy infrastructure abroad in order to contribute to the global reduction of CO2 emissions consistent with the long-term goals stipulated in the Paris Agreement.” But if that is the case, Japan must not finance or support coal-fired power plants, due to their high emissions of GHGs. Rather, the financing should go to decentralized renewable energy and energy conservation technologies, which have low environmental impacts and low GHG emissions.

Financing needed for sustainable energy, not coal
In the context of growing global concern about climate change and its impacts, there is a trend toward divestment from coal fuel related companies. In particular, when it comes to coal-fired power plant projects and coal mine development projects, a rising number of financial institutions and insurers are changing their credit policies relating to coal power related projects.

In a September 2019 report, Carbon Tracker analysis shows that by 2022, the construction costs for solar power generation in Vietnam will be lower than the operating costs of existing coal-fired power plants[2]. Japan’s Fifth Strategic Energy Plan, released in July 2018, states “Japan will propose to partner countries a full range of options conducive to reductions of carbon dioxide emissions, including renewable energy and hydrogen.” It also states, “… only for those countries that are forced to choose coal as an energy source from the perspectives of energy security and economic viability” will Japan support coal. In the case of Vietnam, there are very reasonable coal alternatives from economic and other perspectives, so any further support for coal-fired power plants would also be in contradiction with Japan’s Strategic Energy Plan.

Multiplication of pollution problems
There are already major polluters not far from the proposed construction site for Vung Ang 2, including the Vung Ang 1 coal-fired power plant, the Formosa Ha Tinh Steel Corporation’s steel plant which triggered a huge fish die off from serious marine pollution in 2016, and a Formosa power plant (coal and gas)[3]. It has been widely reported that environmental pollution from wastewater, atmospheric emissions, and coal ash from these plants could already be having serious negative health impacts on local communities[4].

Financing for yet another new coal-fired power plant would further accelerate climate change, cause the loss of livelihoods in the community near the plant, and result in further air pollution. A report by Greenpeace makes it clear that all coal-fired power plants being exported by Japan are using low-efficiency technologies that are not being used in Japan, and are only using a low level of pollution countermeasures[5].

Serious environmental pollution is already occurring in the area. The construction of a new coal-fired power plant there would compound the pollution problems.