Friends of the Earth Japan (FoE Japan), with the cooperation of a Japanese citizen’s expert, has been continuously analyzing the water quality in the communities surrounding the Coral Bay Nickel Processing Plant Project (the CBNP) and the Rio Tuba Nickel Mining Project (the RTNMP), in the municipality of Bataraza, Palawan, since 2009. Our findings of water quality analysis for these 7 years have clearly shown that Hexavalent Chromium or Cr (VI) in the Togupon River in this area has been exceeding “Environmental Quality Standards Concerning the Protection of the Human Health” (not exceeding 0.05 mg/L) in Japan at almost all the time in every rainy season .

Base on this situation that the water contamination hasn’t been improved yet, FoE Japan submitted a petition to Sumitomo Metal Mining Co., Ltd. (SMM), calling on the joint Investigation regarding water quality and effective mitigation measure against water contamination, from the viewpoint of preventing the long-term health damage and ensuring the security and life of the local people in the future. 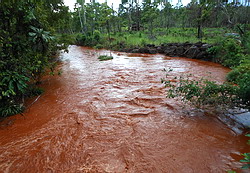 - Annex: A set of each result report on water quality analysis in the area surrounding Coal Bay Nickel Processing Plants and Rio Tuba Nickel Mining Project in Palawan, the Philippines (from year 2009 to 2015)
(* This Annex is 97 pages but only available in Japanese, so far. Instead, please kindly refer to the table and map available here in English.)

SMM has explained to us that Coral Bay Nickel Corporation (CBNC), in cooperation with its partner Rio Tuba Nickel Mining Corporation (RTNMC), had started to take mitigation measures against Cr(VI) flowing out since 2012, such as covering the nickel ore stockpile with canvas sheets, excavating the siltation pond, and putting activated charcoal around the exit of siltation pond liking to Togupon River.

However, as the following table “Result of Water Quality Analysis in Togupon River on Hexavalent Chromium for 7 years” clearly shows, Cr(VI) in the Togupon River has been still exceeding the above-mentioned environmental standards in Japan since 2012.

In addition, based on the most recent result of water analysis in the rainy season (September) of 2015, the expert pointed out, “We could say that the mitigation measures the companies have been taking are not effective. The companies must take drastic measures immediately.” 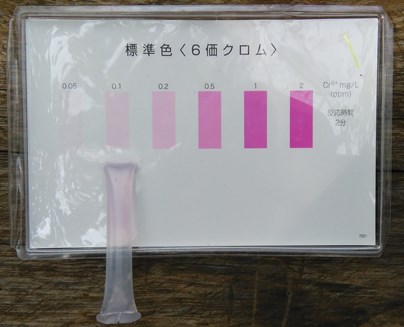 Hexavalent chromium is known as high toxicity due to carcinogenicity, liver damage, and skin disease etc. It is highly recommended that the Japanese companies, such as SMM, and public agencies concerned, such as JBIC and NEXI, take immediate measures, such as the identification of the water contamination mechanism in order to establish appropriate anti-pollution measures.

When Japanese companies make business abroad, they must make the same level of considerations for the local community’s life, environment, culture and human rights as they make business in Japan, and they must comply with the same level of standards as they need to do so in Japan. Instead of Japanese companies accepting “double standards” under the weak governance of local government agencies, their more proactive response is a must.