Sludge Piled up at the Bottom of the Rivers in Palawan, Philippines and the Possibility of Adverse Impact on Ecosystem ------ The Result of Sludge Analysis in October 2011 (Written by FoE Japan in April 2012)

FoE Japan, with the cooperation of a Japanese citizen’s expert, has been continuously analyzing the water quality in the communities surrounding the Coral Bay Nickel Processing Plant Project (the CBNP) and the Rio Tuba Nickel Mining Project (the RTNMP), in the municipality of Bataraza, Palawan, since 2009. In October 2011, we also collected the samples of bottom material piled up in the entire estuary of the Tuba River with a mud sampler. Below is the result of analysis on the bottom material.


Reddish Brown Sludge Piled up at the Bottom of the Estuary of the Tuba River
Several rivers, including the Togupon River, flow into the Tuba River, which discharges itself into the open sea. The mangrove forest grows thickly at the bank and the estuary there.

In October 2011, we collected the samples of bottom material, covering the place from the estuarine basin of the rivers flowing into the Tuba River, to the open sea. 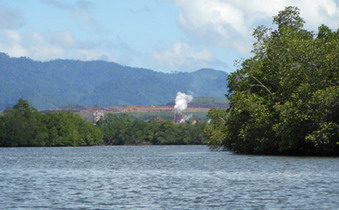 Thick mangrove forest at the estuary of the Tuba River, and the nickel mining site
and the nickel processing plants seen at the backside (October 2011, FoE Japan) 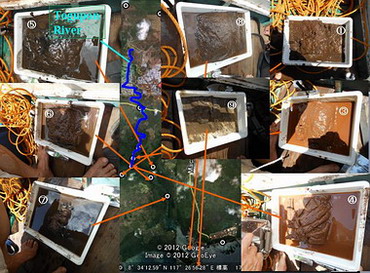 
The results of analysis on metal also support the load of the inflow from the Togupon River into the estuary of the Tuba River. For it is found that the figures of Cr, Mn, Fe, Co, and Ni, are very high at the estuarine basin of the Togupon River, followed by the ones at the sampling points downstream.

Please see the detailed result of the recent sludge analysis (in October 2011) by the expert at the following site;
> Result of sludgeAnalysis (October 21, 2011) (by Mr. Junichi Onuma, Lecturer of Kinjo-gakuin University)


Possibility of the adverse impact on ecosystem
The expert give a comment on the reddish brown sludge with the high concentration of heavy metal, such as chromium and nickel coming through the Togupon River, which we found in this research, that “It might be badly affecting the water ecosystem, by silting widely at the mangrove forest zone and at the open water of the entire estuary of the Tuba River.”

Given the testimonies of the local fisher folks about the reduction of fishes and shells after the operation of the CBNP, and about the color change of the Togupon river after the operation of the CBNP (changing into brown, and even into reddish brown when it rains), the Japanese companies are called on to immediately investigate the actual conditions of environmental impact on the estuary of the Tuba River by the reddish brown sludge, and to take appropriate measures when the destruction of ecosystem at the estuary of the Tuba River is found. 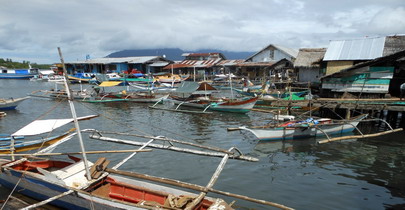 Fisher folks’ community at the estuary of the Tuba River (February 2012, FoE Japan)

The estuarine basin of the Togupon River (February 2012, FoE Japan)

As hexavalent chromium is known as high toxicity due to carcinogenicity, liver damage, and skin disease etc., there is a restriction on it as “Environmental Quality Standards Concerning the Protection of the Human Health” (not exceeding 0.05 mg/L) in Japan. Likewise, effluent standards for hexavalent chromium are provided in the Philippines (not exceeding 0.1mg/L for a new plant and 0.2mg/L for an existing one), and Water Quality Criteria for the Protection of Public Health are also provided (not exceeding 0.05 – 0.1mg/L).

The figures at the Togupon River exceed the Japanese environmental standards or 0.05mg/L by 2 to 6 times. And some of the figures at the estuarine basin of the Togupon River also exceed the Japanese environmental standards. Given the substantial water amount of the Togupon River, the adverse impact of hexavalent chromium on the estuary of the Tuba River must be considerable. It is necessary to identify the cause of water pollution and the mechanism of such contamination, and to take appropriate measures to it.

According to the company of the nickel processing plants, it is planning to take mitigation measures against hexavalent chromium before this coming rainy season, cooperating with its partner company, or the nickel mining company. It is further expected that the Japanese companies and public agencies concerned will keep such positive attitude and make more cooperation, such as the acceptance of a joint investigation with NGOs. And it is also recommended that the Japanese companies and public agencies concerned take more active measures, such as the identification of the water contamination mechanism to establish appropriate anti-pollution measures.

> Please see the map and table on “the results of water analysis on hexavalent chromium in the Togupon River” in previous research at the following site;


(This research has been supported by The Takagi Fund for Citizen Science.)