FoE Japan, with the cooperation of a Japanese citizen’s expert, has been continuously analyzing the water quality in the communities surrounding the Coral Bay Nickel Processing Plant Project (the CBNP) and the Rio Tuba Nickel Mining Project (the RTNMP), in the municipality of Bataraza, Palawan, since 2009. Below is a background and progress of this continuous research, including the result of water analysis recently conducted last October 2011.


Background of Water Analysis
In January 2009, FoE Japan conducted a field research, having the interviews with 133 households in 5 barangays surrounding the project site of the CBNP and the RTNMP. Some 85 percent of 133 households have reported the change of their health condition, such as chronic cough (74.4 percent), chronic headache (40.6 percent), and skin disease (37.6 percent). As one of the experiments to identify the cause of their health damage, FoE Japan, with the cooperation of a Japanese expert, started to water analysis, which has been conducted five times so far (in July and October 2009, in March and August 2010, and in October 2011).

Collected the water sample in the Togupon River (Sampling No.11)

The upper end of estuarine basin where the Togupon River flows into (Sampling No.2)

The estuary of the Tuba River where Togpon River merges into (Sampling No.4)

Hexavalent chromium or Cr (VI) in the Togupon River has been continuously exceeding the environmental standards in the previous research.

As hexavalent chromium is known as high toxicity due to carcinogenicity, liver damage, and skin disease etc., there is a restriction on it as “Environmental Quality Standards Concerning the Protection of the Human Health” (not exceeding 0.05 mg/L) in Japan. Likewise, effluent standards for hexavalent chromium are provided in the Philippines (not exceeding 0.1mg/L for a new plant and 0.2mg/L for an existing one).


The table below is the results of the water analysis from 2009 to 2011 (five times in total), only extracting the data of the Togupon River flowing down through the sites of the CBNP and the RTNMP.

Remarkable water contamination by hexavalent chromium (0.1 to 0.3mg/L) has been found, which exceeds the Japanese environmental standards or 0.05mg/L by 2 to 6 times.

Also, some 0.1 to 0.15mg/L of hexavalent chromium has been found in the upper end of estuarine basin where the Togupon River flows into. Given the substantial water amount of the Togupon River, the adverse impact of hexavalent chromium on the estuary of the Tuba River must be considerable. It is necessary to identify the cause of water pollution and the mechanism of such contamination, and to take appropriate measures to it. 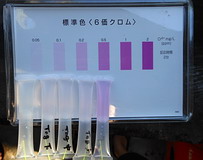 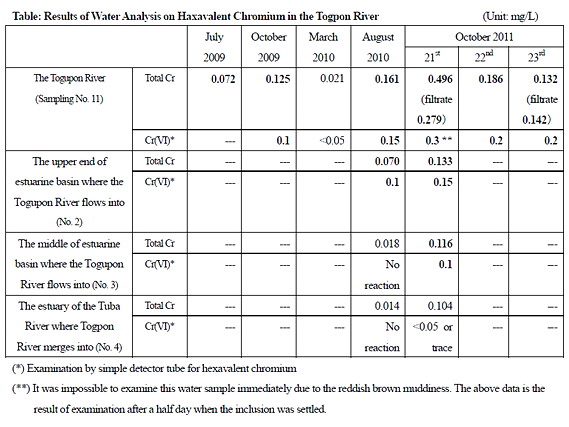 Please see the detailed result of the recent water analysis (in October 2011) by the expert at the following site;
- Result of Water Analysis (October 21 to 23, 2011) (by Mr. Junichi Onuma, Lecturer of Kinjo-gakuin University)
>Map of Locations of Water Sampling (October 2011)

The bottom materials at the middle of estuarine
basin where the Togupon River flows into
(No. 3) (Left) and at the estuary of the Tuba
River where Togpon River merges into (No. 4)

In October 2011, we also collected the samples of bottom material with a mud sampler, covering the place from the estuary of the Tuba River, where mangrove forest grows thickly at the bank and the estuarine basin, to the open sea.

Although the samples of bottom material haven’t been analyzed yet, it was found that the reddish brown sludge had been piled up over the bottom of the estuary of the Tuba River, which is presumed to flow in through the Togupon River.

Given the testimonies of the local fisher folks about the reduction of fishes and shells after the operation of the CBNP, there is also the possibility of the adverse impact on ecosystem.


To Identify the Cause of Contamination
According to the expert, the cause of the water contamination by haxavalent chromium could be;
- the Nickel processing plant;
- the supernatant in the tailing dam;
- the lateritic ore scattered in the site of the RTNMP;
- eluted substance with rain water from the lateritic ore in the open-pit area.
In order to identify the cause of contamination by haxavalent chromium, the cooperation of the project proponents is necessary, such as providing the following samples for the further analysis;
- high-grade and low-grade ores;
- water of some puddles within the site of the CBNP and the open-pit area of the RTNMP;
- supernatant in the tailing dam.
Or it is also recommended that the project proponents investigate it by themselves and disclose the result.

FoE Japan hasn’t yet collected any water samples inside of the project site. The project proponents haven’t yet provided any clear answer about the haxavalent chromium in the Togupon River, either.

While FoE Japan will continue its water analysis in the communities surrounding the nickel project site in Palawan, it is also recommended that the Japanese companies concerned make more cooperation and take more active measure, such as the identification of the water contamination mechanism and the information disclosure, from the viewpoint of preventing the long-term health damage and ensuring the security and life of the local people in the future.

(This research has been supported by The Takagi Fund for Citizen Science.)