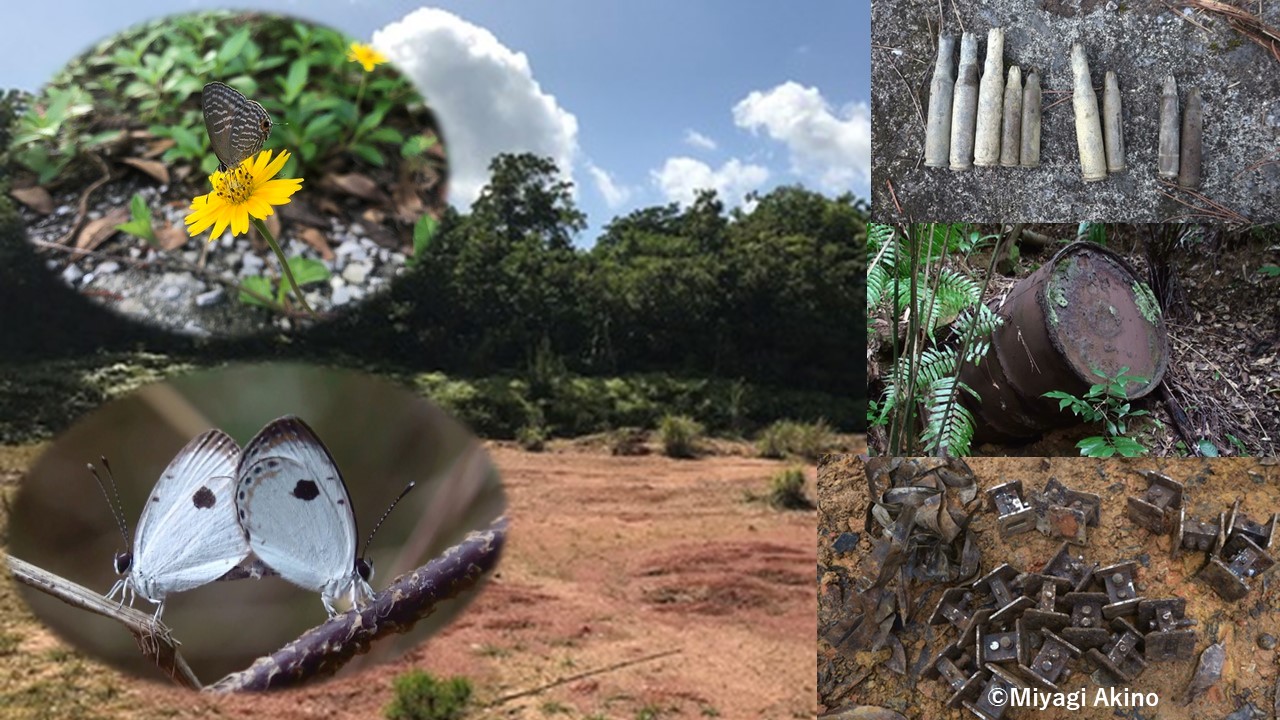 
On June 4, the Okinawa Prefectural Police searched the residence of Ms. Akino Miyagi, a butterfly researcher living in Higashi Village, and confiscated her belongings such as computers, cameras, mobile phones and work clothes. The police also checked her books and took photographs at her residence. Ms. Miyagi is accused of placing a small amount of U.S. military waste front of the gate of the U.S. Marine Corps Northern Training Area. The waste was originally left in the former training area of the northern part of Okinawa Main Island that U.S. Government returned to Japan. This, according to the police, is considered as an act of forcible obstruction of business and a violation of the Waste Disposal Act. She is also accused of violating the Road Traffic Law by halting the progress of two U.S. military vehicles entering the training ground. Interrogations have been carried out many times since the house search. This is an unjust investigation and an intimidating act against Ms. Miyagi and we condemn these acts taken by the Okinawa Prefectural police. We also demand the suspension of the investigation, the return of the seized articles as well as an apology.


While conducting an insect research at the site of the old northern training camp, a part of the Yambaru Forests, a World Natural Heritage candidate site, Ms. Miyagi has discovered large amounts of waste left behind by the U.S. military (Ranging from old to new bullets, grenades, light bullets, drums, empty cans, empty bottles, metal parts containing cobalt 60, and field meal packages). She has notified the police of unused and unexploded ammunition, and has called on the Japanese government to clean up the forest by removing it.


However, the government conducted only a perfunctory environmental survey and removed some of the waste after the partial return of the training site, while a large amount of U.S. military waste was still left uncleaned. Therefore, some areas of the Yambaru Forests remain contaminated. Not only did the government and police not take any measures, but on the contrary, they threatened Ms. Miyagi by conducting a house search and interrogations on suspicion of forcible obstruction of business. This is a crackdown on the person who is pointing out problems and a totally unjust act.


It should not be forgotten that the U.S. military is responsible for the waste in light of the Polluter-Pays principle. In addition to that, the act of protesting by placing waste in front of a responsible organization to denounce illegal waste dumping is recognized as freedom of expression in international environmental movements. It is natural for such act to be permitted in a democratic country. It is only a despotic state that rejects this and oppresses it.


We, the signed environmental groups, pay our respects to and support Ms. Akino Miyagi, who has been passionately conducting biological research and conservation activities in the Yambaru Forests. For the reasons mentioned above, we are deeply shocked and outraged by the search and interrogation of Ms. Miyagi. We condemn the unjust investigation and intimidation on Ms. Akino Miyagi by the Okinawa Prefectural Police. We will also demand the suspension of the investigation, the return of the seized articles and an apology.