171 CSOs from 40 Countries Call on Japanese Government to Stop its Public Finance for Cirebon and Indramayu Coal Plants in West Java, Indonesia

On May 18, an international petition signed by 171 CSOs from 40 countries was submitted to Japanese government, calling on Japan Bank for International Cooperation (JBIC) and Japan International Cooperation Agency (JICA) not to provide their public finance anymore for the expansion of Cirebon coal-fired power plant (1,000 MW) and the expansion of Indramayu coal-fired power plant (1,000 MW), both located in West Java, Indonesia.

The international petition was handed to Ministry of Finance (MoF), Ministry of Foreign Affairs (MoFA), JBIC, and JICA by three (3) lndonesian CSOs’ staffs, including WALHI (FoE Indonesia), who came over to Tokyo during May 15 to 18. They have supported the local communities who are opposing the Cirebon and Indramayu coal plant projects. 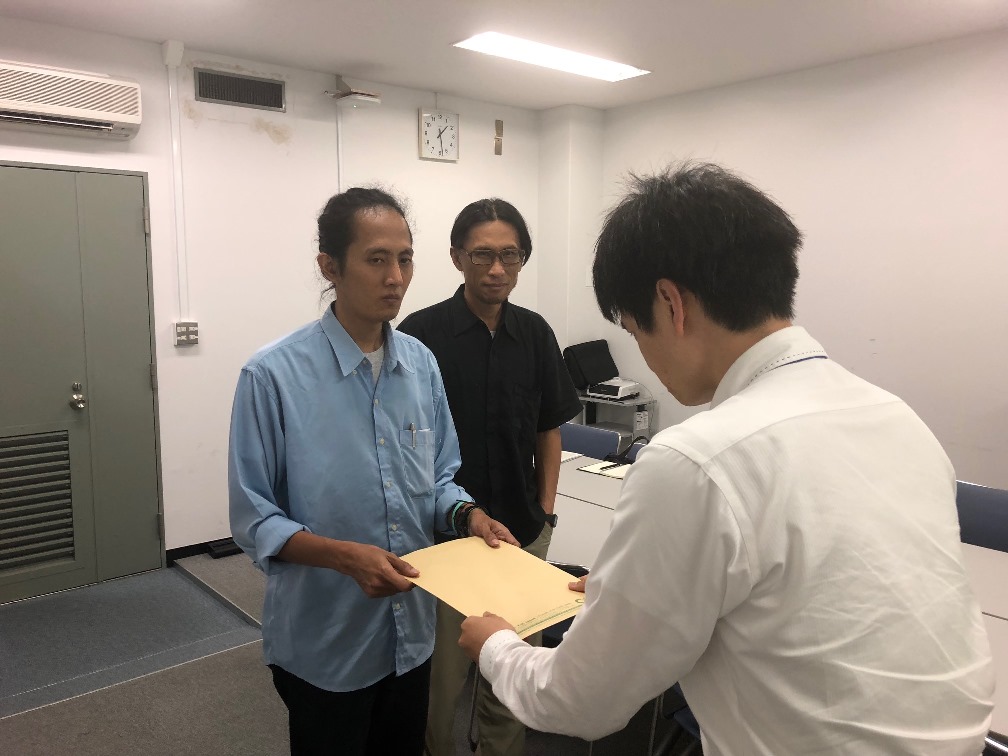 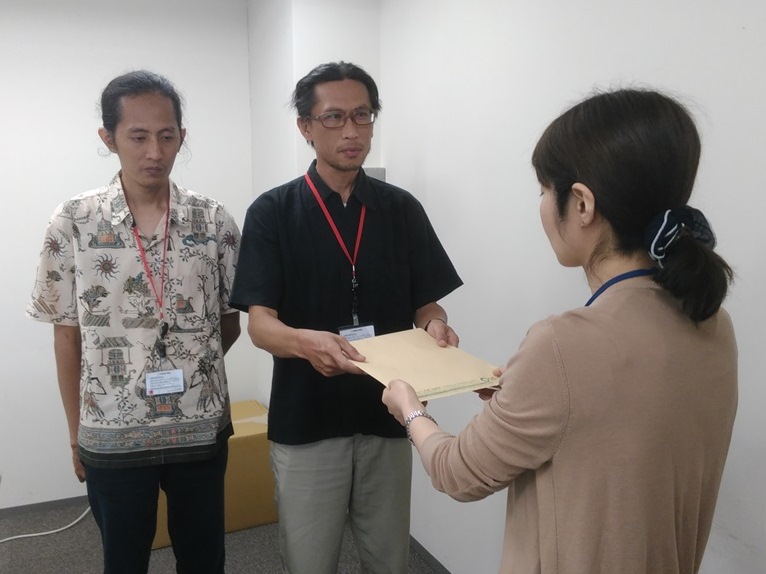 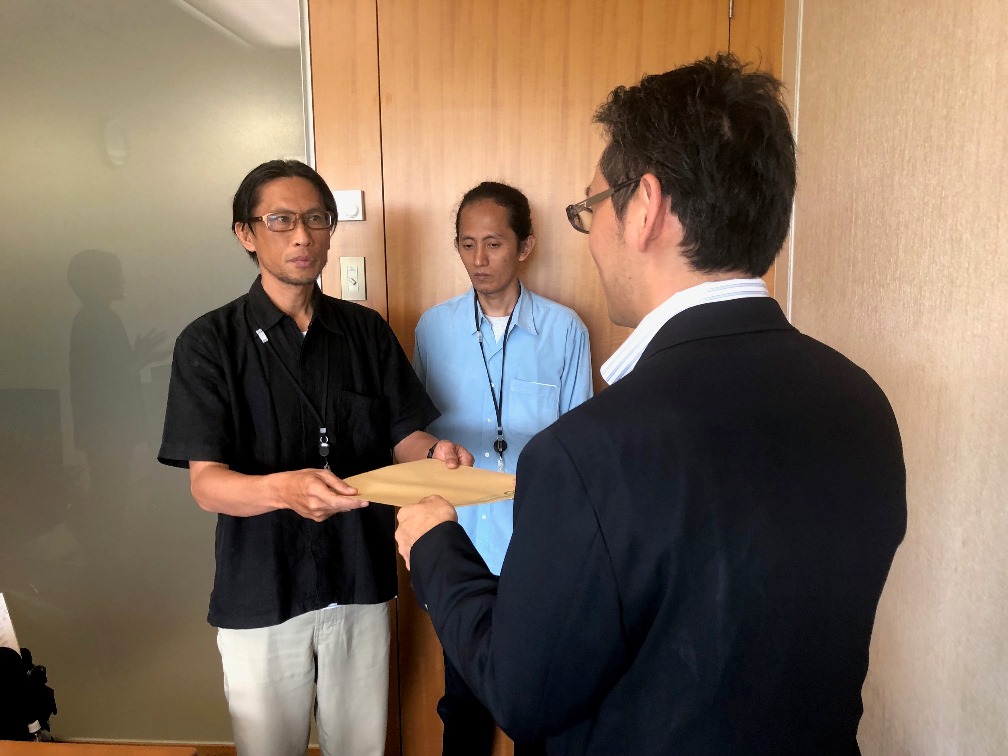 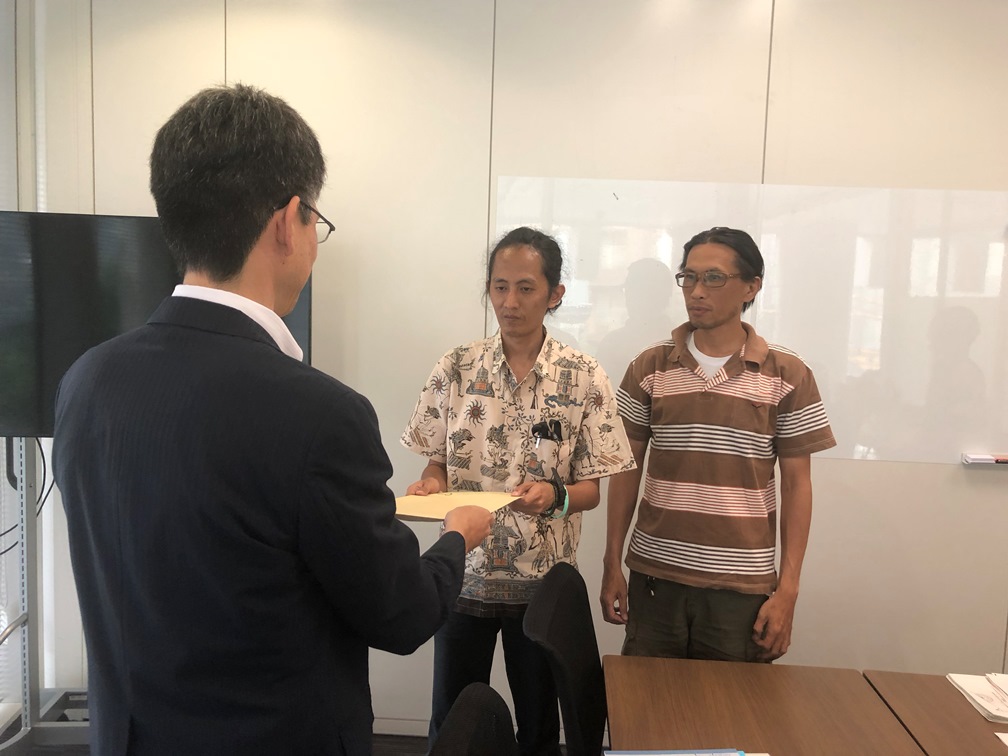 Each community from Cirebon and Indramayu is concerned about the impact on their livelihood and health. They are demanding the stop of both projects in various ways, including protest actions and lawsuits, despite serious human rights violations against them.

Despite the verdicts of the district court in favor of both communities last year, their struggles through litigation are still continuing. The Cirebon community has just made an appeal to the High Court, after the district court rejected their demand or the cancellation of the 2nd environmental permit, which was issued without the awareness of the local community, this May. The Indramayu community has also just made an appeal to the Supreme Court, after the rejection of their demand in the High Court in April 2018.

In the petition, the international CSOs show their strong support for the Indonesian community in Cirebon and Indramayu, who have never given up opposing the projects, and call on the Japanese government to respect the community’s opinion and not to provide the public finance anymore for both projects. In addition, such Japanese continuous finance for coal projects undermines global efforts to dramatically decrease carbon emissions in line with the Paris Agreement. Thus, the petition warns that Japan will likely face more severe international criticism.

During May 15 to 18, a couple of staffs from WALHI and a lawyer, who came over to Japan, explained the local situations and the progress of the communities’ lawsuits in the various occasions as below: a press conference, a seminar in the parliament building, a public seminar, a protest action in front of JBIC, and each meeting with MoF, MoFA, JBIC and JICA. They strongly requested that the Japanese government immediately stop its support for the coal projects which the local communities don’t want. 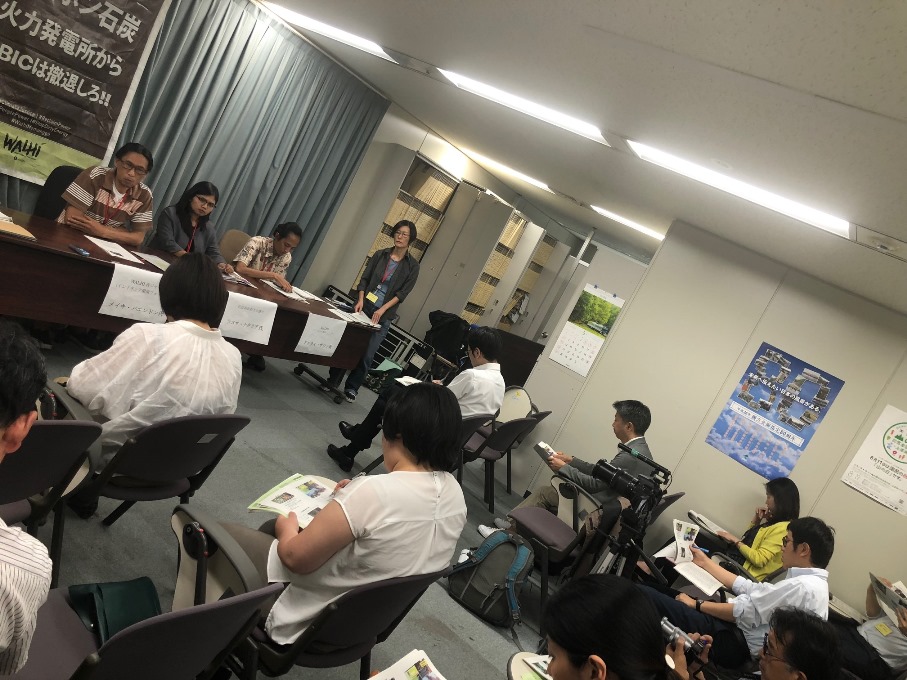 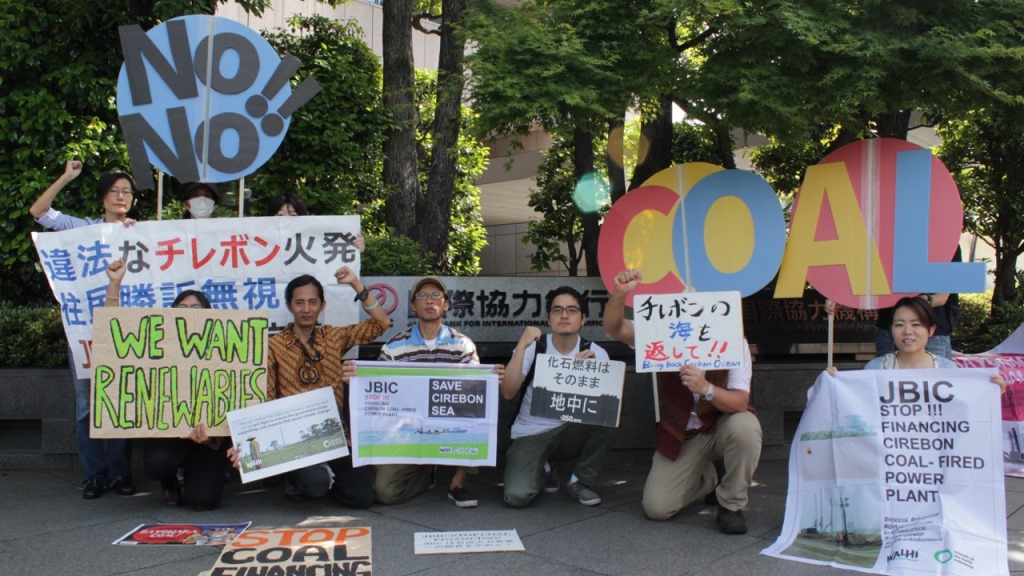 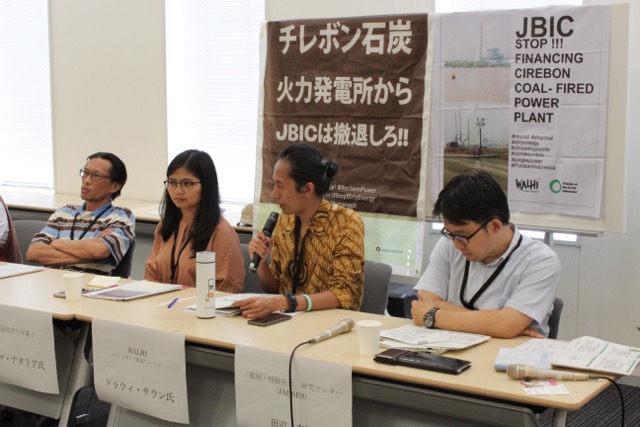 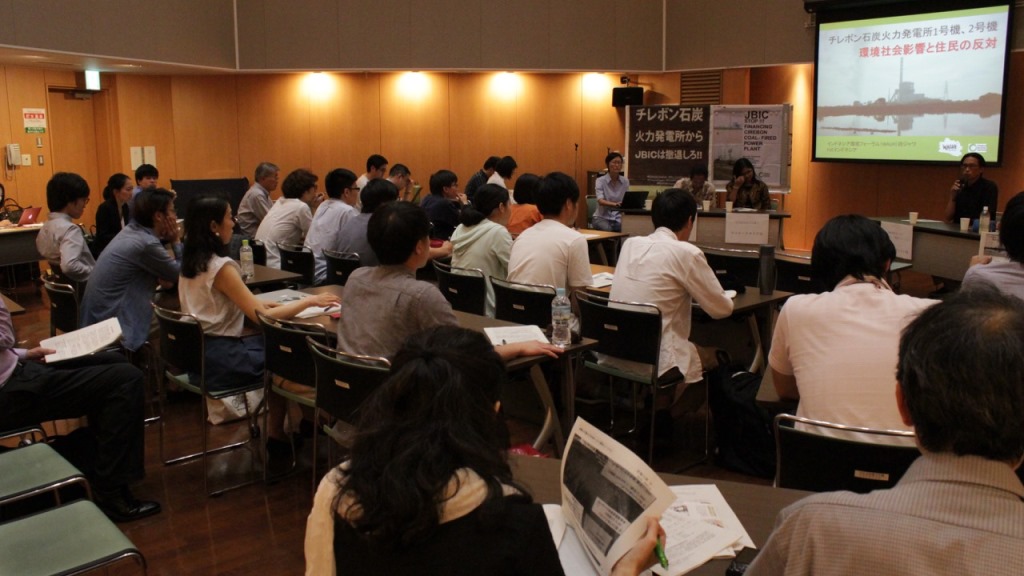 The undersigned groups from across the world are writing to express our strong support for the Indonesian community in Cirebon and Indramayu, West Java, who have never given up and have kept their efforts to protect their life and environment from the Japan-backed dirty coal projects. The Japanese government must respect the community’s continuous opposition shown in various ways, including protest actions and lawsuits, despite serious human rights violations against them. We call on JBIC and NEXI not to support the expansion of the Cirebon coal-fired power plant (1,000 MW) anymore, and JICA to reject the loan for the expansion of the Indramayu coal-fired power plant (1,000 MW).

We have been deeply concerned about the role that Japan has been playing in pushing through the construction of new coal-fired power plants abroad, even after the Paris Agreement was adopted in 2015 and entered into force in 2016.

Such funding of Japanese public and private banks for coal projects undermines global efforts to dramatically decrease carbon emissions in line with the Paris Agreement. To fulfill the Paris Agreement long-term temperature goal, no new coal plants can be built. Japan as a signatory to the Paris Agreement must be responsible by changing its course immediately. Otherwise, Japan will likely face more severe international criticism.

The said coal plant projects in Cirebon and Indramayu have drawn international attention due to the continuously strong opposition of the local people. The affected residents have raised environmental and social concerns, such as adverse impacts on livelihood and health. In addition, the violations against the environmental and social guidelines (the Guidelines), which JBIC, NEXI and JICA own respectively, have been pointed out as described below.

Firstly, both projects entail legally fatal defects in their environmental permits. Each community filed administrative lawsuits, claiming that the permits for the projects were not appropriately issued by the local governments. The district court declared the cancellations of both environmental permits, respectively in April 2017 for the Cirebon case and in December 2017 for the Indramayu case.

Despite these verdicts in favor of the community, their struggles through litigation are still continuing. The Cirebon community has made an appeal to the High Court, after the district court rejected their demand or the cancellation of the 2nd environmental permit this month, which was issued without the awareness of the local community in July 2017. The Indramayu community has also made an appeal to the Supreme Court, after the rejection of their demand in the High Court in April 2018. JBIC, NEXI, and JICA must not provide any support for both projects, unless and until the final court decisions are confirmed. If the cancelations of the environmental permits are confirmed by legal decision, it will become clear that the projects violate their own Guidelines, which require “compliance with environmental laws of the host country” and “the submission of environmental permit certificates.” It must be also heeded that the supporting lawyers’ team and NGOs for the community’s lawsuits are warning that the current situation indicates that laws and regulations to protect the environment are becoming a dead letter, giving in to the interests of development.

Secondly, these ongoing legal cases are one of the clear forms showing the community’s continuous opposition against the said projects in Cirebon and Indramayu. It is obvious that no “social acceptability” for both projects has been secured, which the Guidelines require.

Thirdly, appropriate and effective measures to improve or at least restore the livelihoods of local farmers and fishermen are absent. For example, fishing nets provided by the project proponent are not effective to restore the small-scale fishermen’s livelihood in Cirebon, but rather have divided the local community or society. Likewise, livestock to be provided for the tenant farmers and daily farm labors will not replace the loss of farming land in Indramayu. Those programs are not the right solutions to the huge impact on the community’s livelihood. What the communities need are healthy coastal environments for fishing and fertile irrigated lands for farming. This is a clear violation of the Guidelines which stipulate that “The project proponents must make efforts to enable the people affected by the project to improve their standard of living, income opportunities, and production levels, or at least to restore them to pre-project levels.”

Finally, human rights violations against the vocal community members must not be neglected. Especially, the ongoing criminalization in Indramayu is an alarming situation. In December 2017, a few community members were wrongfully arrested by the local police and are still under suspect status even after their release. The other community members, including one of the plaintiffs in the said lawsuit, have been put in jail since last April. These incidents could cause the chilling effect, or could prevent the community from freely express their opinion in Cirebon as well as Indramayu. It is highly concerned that both projects could not ensure “meaningful participation of the affected people,” which is required by the Guidelines.

Last but not least, we would like to call your attention to the electricity reserve margins in the Java-Bali grid, which have already reached 32 percent surplus. According to the most recent government report, this figure could maintain at 29 percent by 2027. The electricity demand in 2017 for the entire Indonesia was only increasing with 3.57 % and was not consistent with the rate of economic growth, both rates of which were also far below the planning assumption. It is highly questionable if both projects in Cirebon and Indramayu are necessary, at the cost of local life and environment as well as global climate.

We again demand that the Japanese government does not provide any more support for the Cirebon and Indramayu coal-fired power plants. Japan must end its financing for coal projects and shift toward clean and sustainable renewable energy projects that will increase access to electricity without polluting local air and water or contributing to climate change.

This letter is signed by 171 organisations, including those working at international and regional levels plus organisations working nationally in 40 countries.