280 CSOs from 47 Countries Call on Japanese Government to Reject Financing for Cirebon and Indramayu Coal Plants in West Java, Indonesia

On March 23, Indonesian and Japanese CSOs submitted an international petition signed by 280 CSOs from 47 countries to Japanese government, to call on JBIC and JICA not to finance the Cirebon expansion coal-fired power plant (1,000 MW) and the Indramayu expansion coal-fired power plant (1,000 MW), both located in West Java, Indonesia. 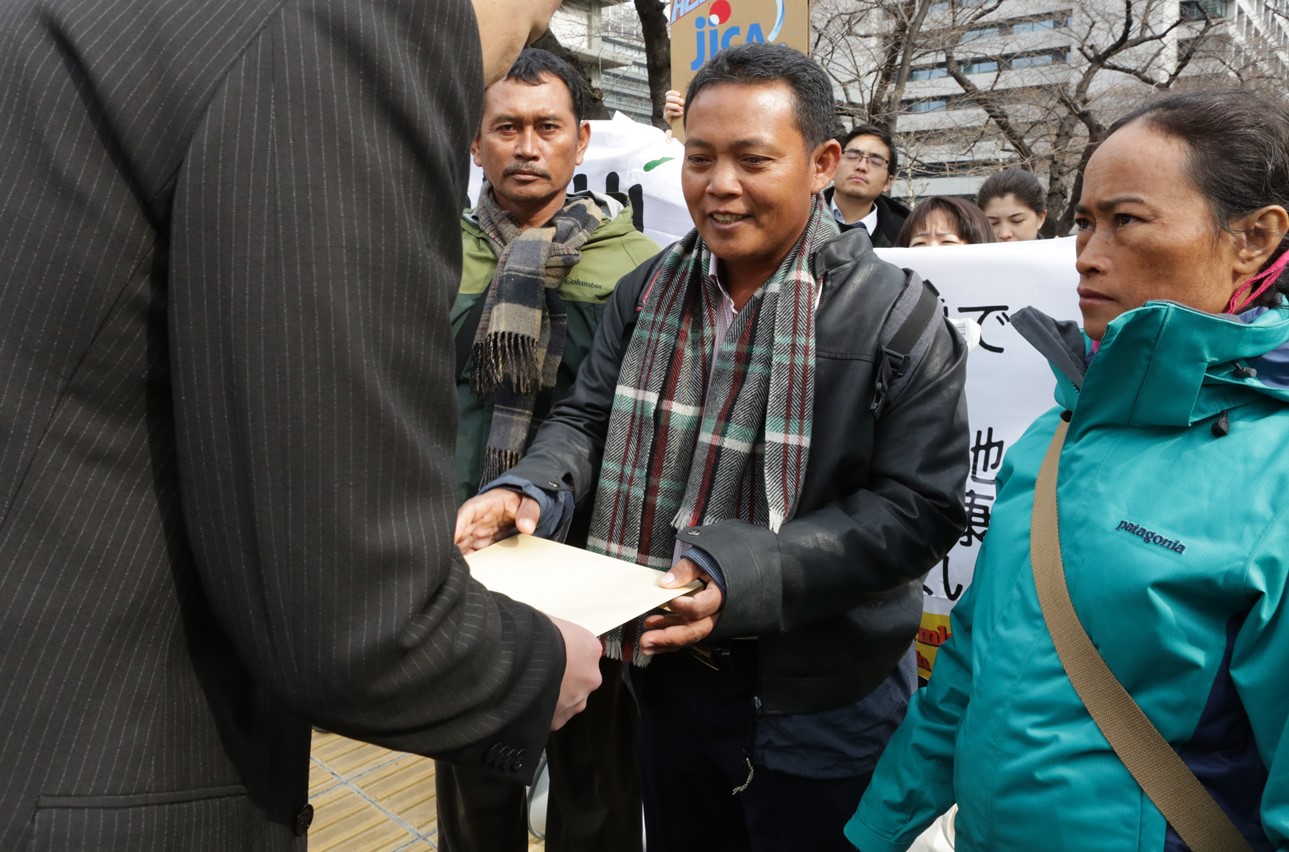 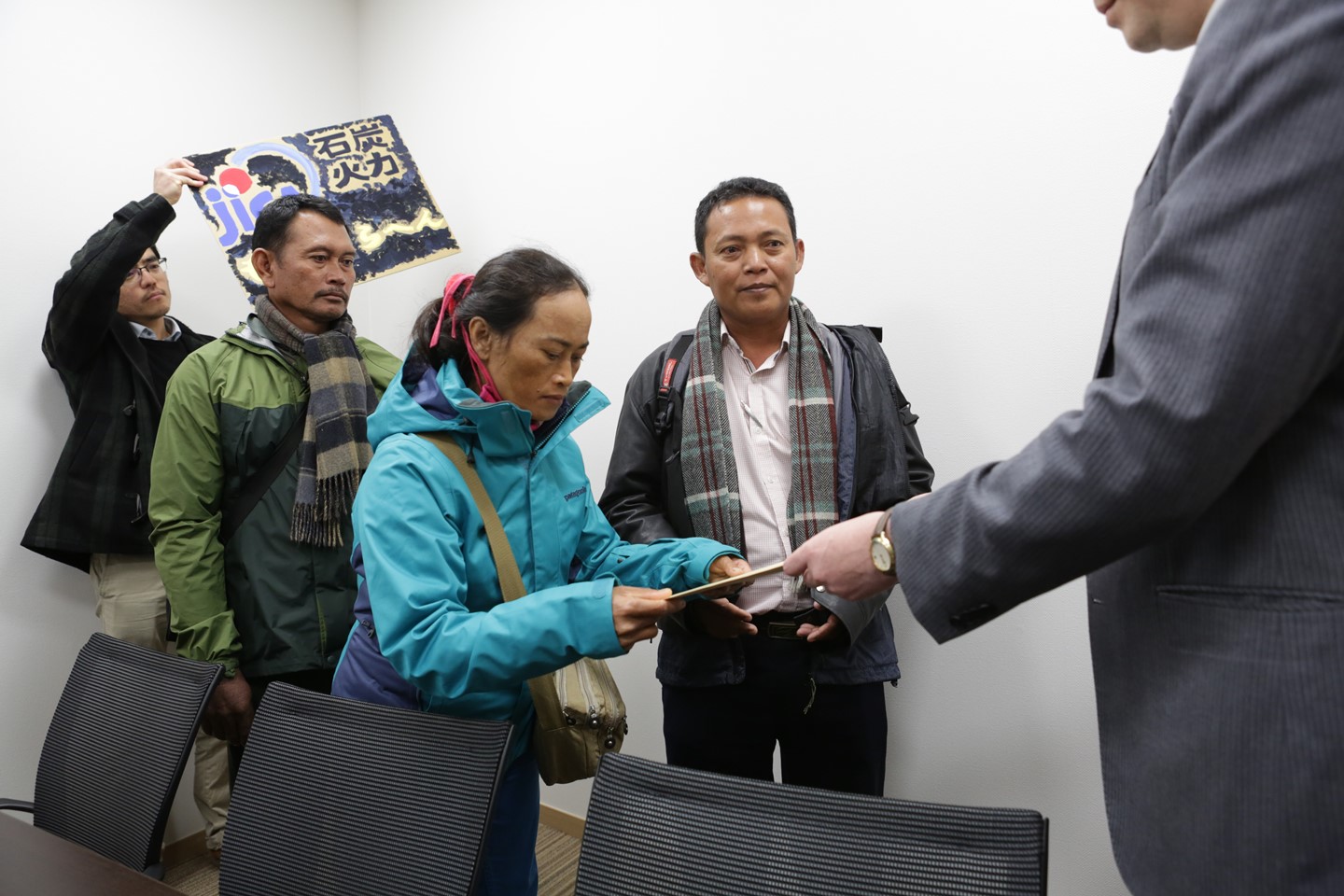 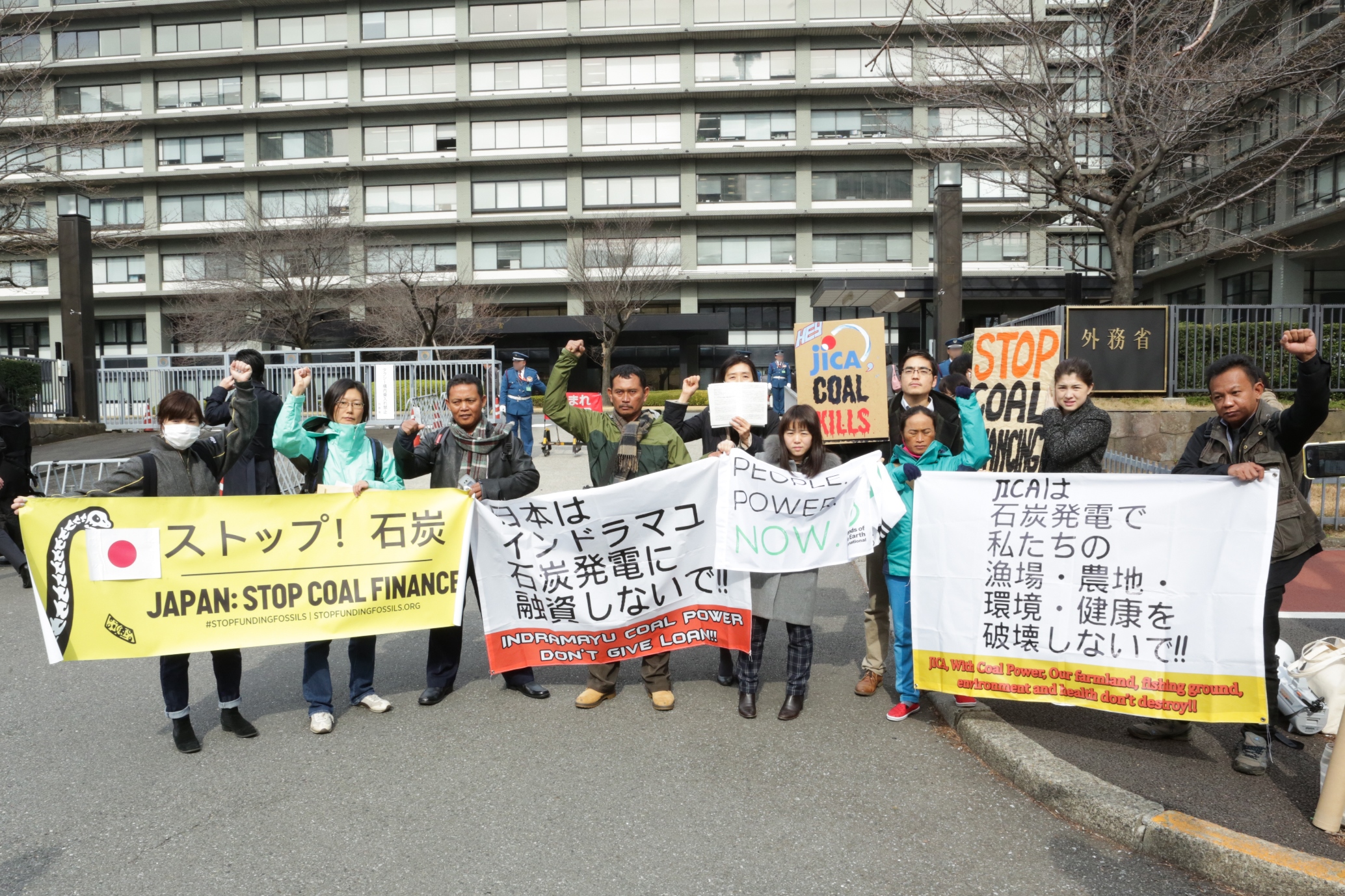 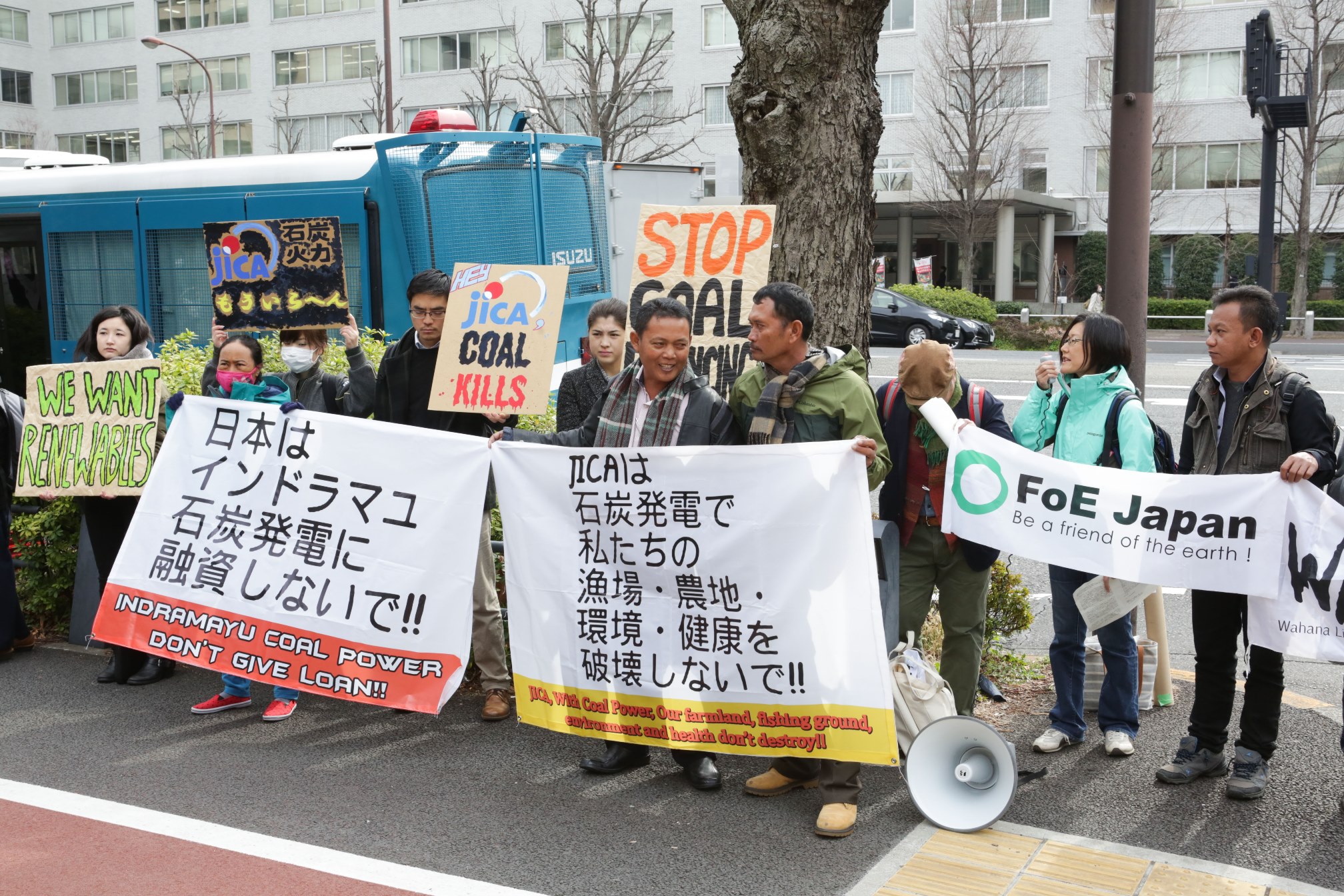 (Photo: Protest action in front of MoFA, appealing not to provide the Japanese tax money for the project destroying the local community's life.)

Indonesian villagers, together with Friend of the Earth Japan, Japan Center for a Sustainable Environment and Society (JACSES), Kiko Network, and 350.org Japan, also took the protest action in front of MoFA and JICA, demanding the Japanese government not to provide Japanese tax money or public fund for such project as depriving the local community of farmland/fishing ground and making them poorer.

The petition warned that such funding would add more burden for Indonesian communities to become the victims of land grabbing, environmental degradation, human rights violations, and divided community, and would undermine global efforts to dramatically decrease carbon emissions in line with the Paris Agreement and a 2°C global warming limit.

Japan has continued its dirty coal finance for one after another in Indonesia within only one year, including JBIC-funded Batang project (2,000MW) and Tanjung Jati B project (TJB2) (2,000MW) in Central Java.

Japanese government must refuse financing for the projects in Cirebon and Indramayu in West Java, which the local communities are strongly opposing and the international society is expressing a big concerns about.

The undersigned groups from across the world have been deeply concerned about the role that Japan has been playing in pushing through the construction of new coal-fired power plants abroad, including projects in Botswana, Indonesia, India, Mongolia, and Vietnam, even after the Paris Agreement was adopted in 2015 and entered into force in 2016. To fulfill the Paris Agreement, we understand that no new coal plants can be built to keep global warming under 2°C.

Most recently, we strongly condemn the decision of Japan Bank for International Cooperation (JBIC) and Nippon Export and Investment Insurance (NEXI) to finance and provide insurance for the re-expansion of the Tanjung Jati B coal-fired power plant project (Unit 5 and 6, a total installed capacity of 2,000 MW) in Central Java, Indonesia, last February, after French commercial banks withdrew from the bank consortium for this project in line with their commitments to reduce coal finance. This comes less than a year after the JBIC’s financing of the controversial Batang coal power plant project, with a capacity of 2,000 MW, in the same Central Java, in June 2016.

And it is cautiously alerted that Japan is considering financing two more new coal-fired power plants in West Java, Indonesia: namely the expansion of the Cirebon coal-fired power plant project (1,000 MW) to be supported by JBIC and NEXI, and the expansion of the Indramayu coal-fired power plant project (1,000 MW) to be funded by Japan International Cooperation Agency (JICA). We urge the Japanese government to immediately reject funding of these two coal fired power plants as such funding will undermine global efforts to dramatically decrease carbon emissions in line with the Paris Agreement and a 2°C global warming limit. Additionally, these two projects would involve the following environmental and social concerns, based on which Japanese public agencies must deny financing for the two projects according to their own environmental and social guidelines.

In Cirebon, residents affected by the existing plant, for which JBIC and NEXI provided a loan and insurance, submitted their objection paper to JBIC’s Examiners for Environmental Guidelines in November 2016. One of the principal problems raised in this objection paper was the resulting loss of livelihoods and income opportunities from the existing plant. Construction of the expansion plant in Cirebon gives rise to concern about similar impacts on livelihood. At the present time, however, appropriate and effective measures to improve or at least restore their livelihoods are absent for the residents engaged in small-scale fishery, salt production, agriculture etc. Therefore, the deterioration of residents' lives due to the impacts on livelihood will be repeated. This is a clear violation of the JBIC and NEXI’s Guidelines which stipulate that “The project proponents, etc. must make efforts to enable the people affected by the project to improve their standard of living, income opportunities, and production levels, or at least to restore them to pre-project levels.”

In Indramayu, the local residents have expressed their strong opposition against the expansion of coal-fired power plant by sending petition letters directly to JICA five times since last year. In the letters, they have repeatedly conveyed their concerns about the impact on health as well as their livelihoods, such as fishing and farming. It is clear that no “social acceptability” for this expansion project has been secured, which the JICA Guidelines require.

It is also reported that the relevant authorities of Indonesian government have failed to secure the appropriate and transparent processes in land acquisition and compensation measures as well as environmental assessment related to the Indramayu expansion project.

For example, the compensation for landowners has been already paid by the government authority since last December and the land-clearing work for the expansion project seems to be slated to start this March. However, no draft and final version of land acquisition / compensation plan and livelihood restoration plan has been completed or has been made public yet till today (as of the middle of March). While the landowners, who are assigned to hand the compensation to the tenants after receiving it from the authority, usually don’t provide any document or proper explanation, tenant farmers could not have any opportunity to express their opinion about or even to know the standard of the compensation for their crop. Likewise, it is not ensured that the fisherman and the daily farm workers could know about the measures for their loss of livelihoods or income opportunity. This is a fatal violation of the JICA environmental and social guidelines, which require “appropriate participation by affected people in the planning, implementation, and monitoring of resettlement action plans” and “the disclosure of resettlement action plans.”

The above-mentioned four projects in Indonesia are all located in Java Island and total capacity is 6,000 MW if all the projects are carried out as planned. In the meantime, it is reported that the electricity reserve margins in the Java-Bali grid have already reached 32.34 percent surplus. A government report states that the electricity reserve margins in the Java-Bali grid could reach 63 percent surplus in 2019 after all the power plants that is currently under construction are completed. (*1) It is because the demand for electricity hasn’t been increasing as estimated due to the overestimated rate of economic growth by the Indonesian government. Thus, there should be a thorough analysis whether those coal plant projects are to primarily produce energy for people and about energy access for the poor, and whether any more sensible alternatives could be available.

It has been already too huge burden for Indonesian communities to become the victims of land grabbing, environmental degradation, human rights violations, and divided community, giving in to Japan-funded coal projects. We call on the Japanese government to immediately reject financing the Cirebon and Indramayu coal-fired power plants in West Java. Japan must end its financing for coal projects and shift toward clean and sustainable renewable energy projects that will increase access to electricity without polluting local air and water or contributing to climate change.

This letter is signed by 280 organisations, including those working at international and regional levels plus organisations working nationally in 47 countries.