The protesting residents forcibly removed. The next clash expected on 6th August 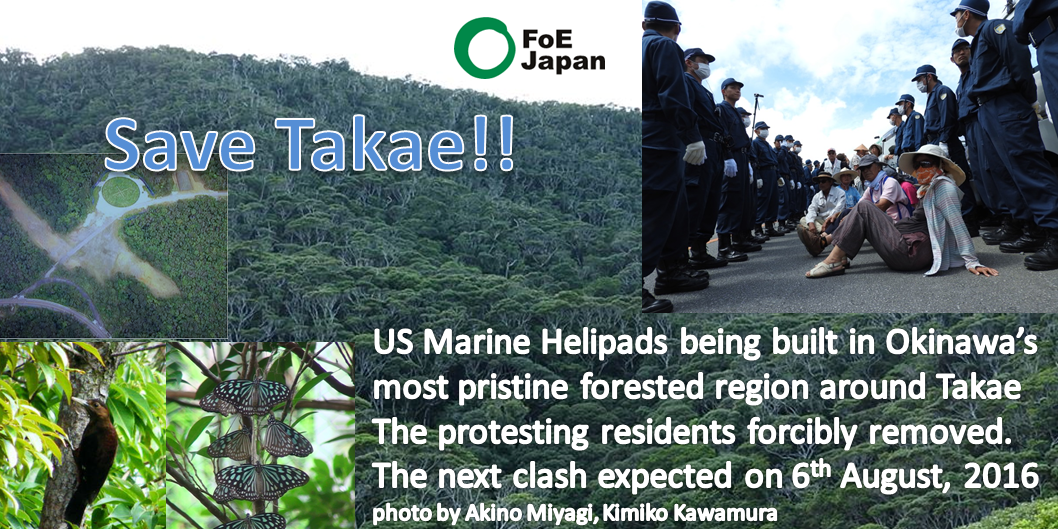 “Yanbaru” is subtropical forest spanning the Kunigami mountains in northern Okinawa. It is the refuge for many surviving wildlife endemic to the region and the Ryukyu islands. Yanbaru fullfils the criteria for the World Heritage Lists - ‘to contain the most important and significant natural habitats for in-situ conservation of biological diversity, including those containing threatened species of outstanding universal value from the point of view of science or conservation.’

Takae, Higashi is a small village (population 150). The residents have lived a peaceful existence here surrounded by the beauty and abundance of nature. However, the US Marine Corps, abetted by the Japanese government, are now in the process of constructing six V-22 Osprey helipads in a layout which will surround the residential area of Takae and it will shatter the remote sanctity of this unspoiled paradise. Despite strong resistance, two helipads have already been built and are operational. The sky above Takae now reverberates with the terrifying noise pollution of Osprey helicopters day and night.

In July 2016, the Japanese government sent 500 riot police from the mainland Japan to forcefully remove the no-violent protesters from conducting a peaceful “sit-in” so that construction of the remaining four helipads could proceed. Unbelievably, the Japanese mainstream media have barely covered this issue, presumably having been pressured not to do so by the authorities.

It is expected that next forcible removal of the protesters and their base tents on another site is to be carried out by the riot police on 6th of August or the following couples of days.

The Takae residents and supporters are desperate for this human and ecological tragedy to gain wider exposure. Please circulate this abuse of power and ongoing environmental emergency to your networks so that the global community can learn the truth and help lend their support.