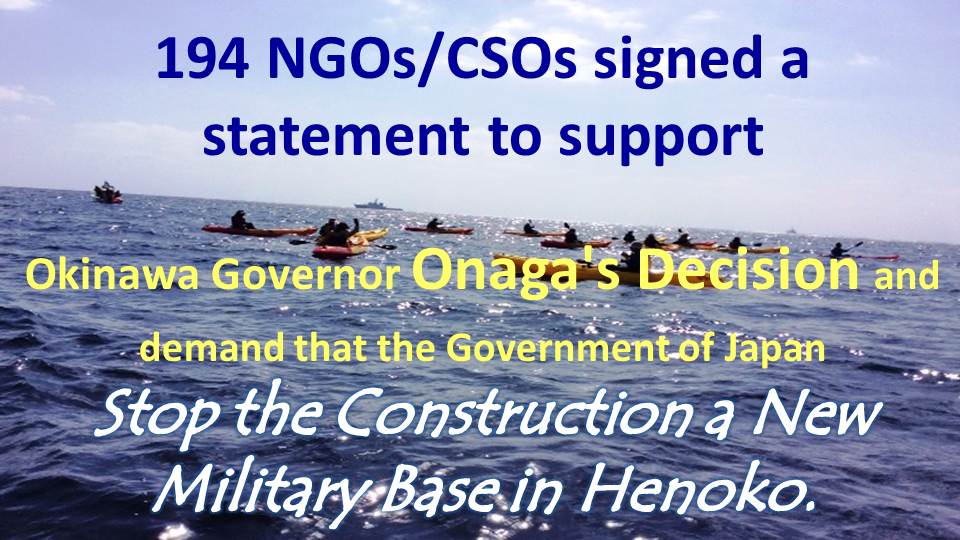 Today, Okinawa Governor Onaga Takeshi revoked the approval of land reclamation in Henoko as part of the relocation of MCAS Futenma to Nago City.

Friends of the Earth Japan submitted a joint statement to the Government of Japan with signatories of 194 NGOs/CSOs and 6,423 citizens to support his decision and demand that the Japanese government stop the
construction of a new base there.

The Japanese Government Must Take the Public Opinion in Okinawa Seriously

Today, Okinawa Governor Onaga Takeshi revoked the approval of land reclamation in Henoko as part of the relocation of MCAS Futenma to Nago City. We support his decision and demand that the Japanese government stop the construction of a new base there.

In the gubernatorial election in November 2014, Mr. Onaga ran on the campaign promise to stop the construction of a base in Henoko, soundly defeating the incumbent governor Nakaima Hirokazu by a margin of 100,000 votes. In fact, previous elections, the prefectural and municipal councils, and actions of citizens in Okinawa clearly and repeatedly expressed the public opinion opposing the base construction (see Appendix). The Japanese government should not ignore the overwhelming opposition among Okinawa residents.

Governor Onaga carefully deliberated on the revocation by consulting with an independent review committee. After considering the reclamation approval, the committee found four problems with its legality: (1) the “necessity of reclamation” is not demonstrated; (2) the condition of “appropriate and rational use of the land” is not met, i.e. benefits of the land use are not demonstrated to exceed costs; (3) environmental impact assessment and conservation measures are inadequate; and (4) the approved reclamation contradicts legally-binding prefectural policies, such as “Okinawa Biodiversity Strategy” and Ryukyu Islands Coastline Preservation Basic Plan.

Ecosystems and biodiversity are valuable properties for humankind. They are also foundations for the local community to envision its future. Local residents therefore have the rights to participate in the process of deciding how to use natural resources and balance development with environmental conservation.

Moreover, the Aichi Targets adopted at the 2010 10th Conference of Parties (including Japan as a signatory) define the conservation of vulnerable ecosystems, especially coral reefs, and endangered species as an important goal. According to the international targets, Henoko and Oura Bay qualifies as a “high conservation value” ecosystem since it hosts more than 5,300 species, including 262 endangered ones.

In response to the governor’s plan to revoke the approval of reclamation, the Japanese government is expected to file a request for administrative grievance hearings according to Article 255.2 of the Act on Local Autonomy. But this article is meant to protect rights of citizens against the exercise of undue power by the government. Such a request by the national government against the prefecture in a weaker position will contradict the spirit of law and democracy.

We thereby demand that the Japanese government accept the governor’s plan to revoke the reclamation approval in light of the public opinion in Okinawa, not file a request for administrative grievance hearings, and stop the construction of a new base, for the sake of protecting the invaluable biodiversity in Henoko and Oura Bay.

Appendix: A Timeline of Okinawa Residents*; Responses to the Construction of a Base in Hekono

Dec 1997: Referendum on the construction of an offshore heliport in Nago (54% opposed)

Jan 2010: In the Nago City mayoral election, Susumu Inamine was elected on a campaign promise not to allow the construction of a new based either on sea or land in Henoko

Nov 2010: Okinawa Governor Hirokazu Nakaima was reelected on a campaign pledge calling for the relocation of MCAS Futenma out of Okinawa Prefecture

Jan 2013: Leaders of all 41 Okinawan municipalities and representatives of Okinawa Citizens’ Rally delivered the petition to Prime Minister Abe Shinzo, urging the cancellation of the MV-22 Osprey deployment and the relocation plan of MCAS Futenma within Okinawa Prefecture

Nov 2014: In the gubernatorial election, Takeshi Onaga was elected on a campaign promise not to allow the construction of a new base in Henoko, defeating the incumbent Nakamine by a margin of 100,000 votes

Dec 2014: In the general election, All Okinawa, the political party opposing the construction of a new base in Hekone, defeated the ruling Liberal Democratic Party

Jan 2015: The government placed floats in the “emergency restricted area,” destroying 2-45 tons of coral reefs outside of the area where crushing was permitted