31 non-governmental organizations in the world released a statement to oppose the Construction of a New Military Base at Henoko and call on the Japanese Government to listen to the voices of Okinawan people and stop the construction.

Please sign the petition to save Henoko. We call for your support to demand. Signatures will be collected untill the May 6, 2015 and be submitted to the Government of Japan and U.S. 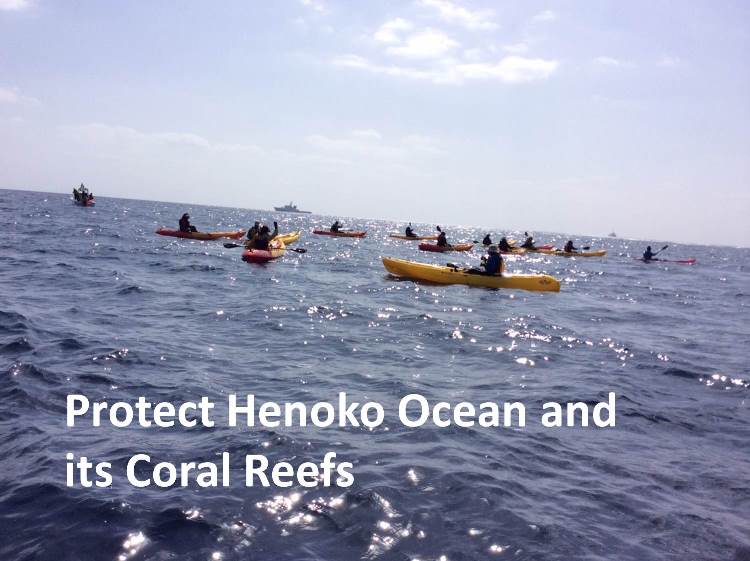 Oura Bay in Henoko, Okinawa –There are beautiful coral reefs that have formed over a long period of time.
A wide range of topography supports different ecosystems continuously exist in one place; mangrove forests, tidelands, seaglass beds, sandy areas, mud flats and coral reefs. The two rivers from “Yanbaru” forest run into this area also support rich marine ecosystem. Large colonies of blue coral (Heliopora coerulea）were recently discovered in this area and it is also known as dugong(Dugong dugon)’s northern habitat in the world, which is classified as critically endangered (IA) by the Japanese Ministry of Environment. These facts make it clear that this coastal area is extremely important for biodiversity. The coastal area of Henoko and Oura Bay is designated as “Assessment Rank I” according to the Guidelines on the Conservation of the Natural Environment of Okinawa Prefectural Government and is also on the list of Important Marine Areas in Japan selected by Japanese Ministry of Environment. Furthermore, it is a habitat for 5,300 marine organisms, including 262 endangered species just to be confirmed.

At this very moment, Japanese government is forcing through a plan to build a new military base at Henoko coastal marine habitat with richness of biodiversity, and being destroying.

The Candidates opposed to build the new base were elected at the mayoral election at Nago City, the Nago City Council Election, the Okinawa Gubernatorial election and House of Representatives election last year. The voice of people in Okinawa, “Do not need new base in Henoko”, has been made clear through the results of these elections.

However, Prime Minister Abe has refused to even meet with Okinawa Governor Onaga who was elected by the people of Okinawa opposing to the building of the new base. This procedure of the Prime Minister is completely unacceptable action in term of the democratic country. The Governor is requesting a suspension of the construction works but he is being completely ignored.

74% of all US military bases located in Japan are concentrated in Okinawa, and 18% of the terrestrial area is occupied by US military bases. This situation in Okinawa violates the rights of citizens that are guaranteed by the Japanese constitution. It is extremely problematic that the opinion of the people is being ignored with unrespect for the environment, human rights and peace, and the construction forcibly going ahead.

The Japanese government restarted survey boring the sea bottom of some points at Henoko coastal area on March 12 towards to start the main construction work in August. Furthermore, work to construct a giant “temporary wharf” (maximum width 25 meters, length 300 meters) is going to build due to the reason of necessary survey. Also giant concrete blocks were dropped onto the sea bed, crushing corals and seaweed, and it has been observed affecting the rich coral reef ecosystem with no longer seen coming Dugong to feed since last September.

Many people in Okinawa and from all over Japan are gathering in Henoko, on the ocean and in front of the gates of Camp Schwab to protest against construction of the base every day.

We strongly oppose to construct new Henoko base in Nago City, Okinawa Prefecture, and demand suspend the construction of both Japanese and US governments to protect the precious ecosystem of Henoko, Oura coastal area based on the will of the people that has been made clear in Okinawa.