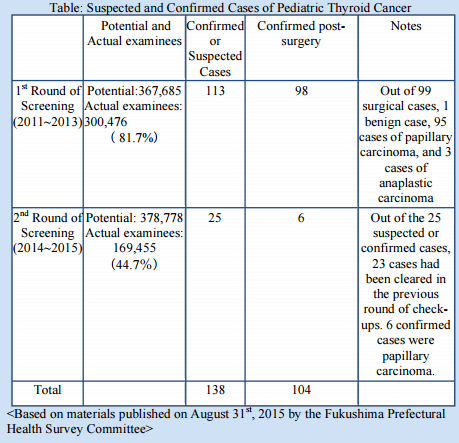 The term “suspected” in this context means those who were diagnosed with thyroid cancer based on their cytodiagnosis. The term “confirmed” refers to the diagnosis after examining the cells post-surgery.

According to data from the National Cancer Center, thyroid cancer in the late teen-age bracket is found in 0.9 of every 100,000 people. Currently, this overwhelming and disproportionately large number of confirmed cases of pediatric cancer in Fukushima is said to be a result of the “screening effect”. This narrative claims that cases of thyroid cancer, which otherwise would have been overlooked or undetected, are being discovered at a faster pace due to the echocardiography tests widely conducted for children in Fukushima, and suggests that the large numbers of confirmed cases do not point to a real increase in thyroid cancer events. However, this narrative contradicts the reality of the 23 children who were diagnosed with thyroid cancer in their second screening after being cleared in the first round screening.

Increasing cases of lymph node-metastasis and spread of cancer to parts of the body outside of the thyroid gland. Collapse of the “over-diagnosis” narrative.

Even after thyroid cancers were discovered in children after the second round of examinations, the government still insisted that these cases had “little relation to the nuclear accident.” They eventually proceeded to use the “over-diagnosis” narrative that some specialists advocated, and refused to change policies regarding the children and accident victims.
The term “over-diagnosis” in this context basically means “diagnosing one with cancers that do not threaten their lives.” In other words, diagnosing someone with thyroid cancer and going through the process of surgery even though it is not a serious threat.
However, on August 31st, Fukushima Medical University’s, Dr. Shinichi Suzuki, published a paper based on the 96 children who underwent surgery. He found that there were 72 cases of lymph node metastasis, and 92% of the cases fell into the categories of lymph node metastasis, infiltration of the cancer to parts of the body outside of the thyroid, or remote metastasis. A member of the Prefectural Health Survey Committee, Mr. Kazuo Shimizu, has written that “the Medical University’s surgeries have been carefully selected.” Already, the notion of “over-diagnosis” has collapsed.

Dr. Shinichi Suzuki had previously has been in charge of thyroid cancer examinations since the start. In response to criticisms of “over-diagnosis,” he has stated that patients who undergo surgeries are those who suffer from “clinically hoarse voices, and most patients have lymph node metastasis,” and “cannot be left without medical care.”

Fukushima Medical University has categorized the first round examinations that occurred from October 2011 through April 2014, as the “initial screening,” and use the results as a way to understand the medical atmosphere prior to the nuclear accident. From April 2014 onwards, specialists use the second round of examinations, categorized as the “real screening,” to understand the medical situation since the nuclear accident. Let us compare the two,

It is evident that the proportion of males who participated in the 2nd round of examinations was much higher than the 1st round, and the age range is much bigger in the second round as well.

The decrease in ratio of examinees ~ The barriers of risk communication

The biggest point that we worry about is the big decrease in the ratio of examinees. While the 1st round screening had an examinee rate of 81.7%, the 2nd round screening only recorded 44.7%.
In addition to the sentiment of not wanting to think about health risks due to radiation, the government’s campaign of denying the danger of radiation by advocating ideas of “radiation is not a big deal,” and “being worried about radiation has a bigger negative impact on your health” is clearly working.
Instead of investing money into risk communication, they should be analyzing individual cases, increasing pediatric thyroid cancer screening to also cover other prefectures outside of Fukushima, and researching other diseases that weaken the thyroid as well as other diseases in general that come from exposure to radiation. (Kanna Mitsuta)