This joint statement issued by Japanese environmental NGOs was endorsed by 223 organizations and 892 individuals (of which 181 people were associated with an NGO). 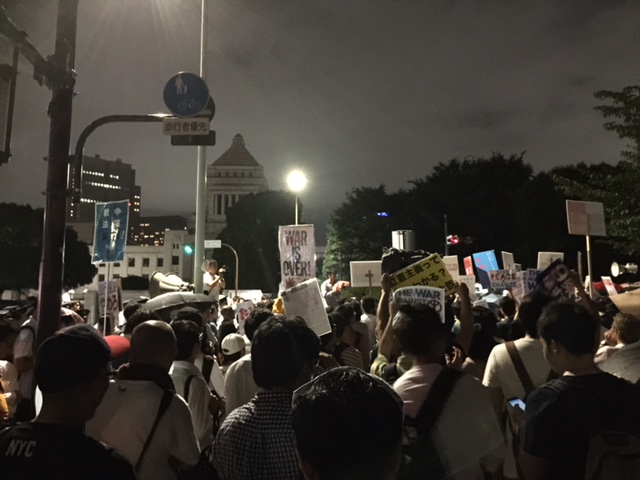 Invitation to endorse statement: [Period from 15 July to 27 July]

The environmental movement aims to protect not only the environment and biodiversity, but also protect human rights and peace, and create a society in which we can live fulfilling lives in safety and security.

International treaties based on environmental protection such as the Convention on Biological Diversity work under the broad themes of “environment, human rights, and peace” and thus, address issues of biological diversity, natural resources, global warming, energy, waste, nuclear power plants, nuclear weapons, war, poverty, economic disparity, discrimination, minority groups, indigenous communities, and local communities. These issues are all closely related. The international community focuses on all these issues because it recognizes that they can only be solved together.

Currently, the Japanese National Diet is deliberating a security reform bill what could enable Japan to be complicit in wars. If approved the bill will have a large negative impact not only in Japan, but also on the “environment, human rights, and peace” on a global scale.

For these reasons, we environmental NGOs are strongly opposed to this bill. We will protest against any forced vote in the House of Representatives, and state our position through this joint statement. We intend to continue our actions in future protests to this bill.

Joint Statement by Japanese NGOs Against the Security Reform Bill

Revisions of the “Security Bill”(*) are currently being deliberated in Japan.

As NGOs that has been focused on environmental protection, peace, and human rights issues, we are strongly against the Security Reform Bill because it would allow for Japan to become involved in wars, and thus become complicit in exacerbating global problems. We also protest against the deliberations conducted as a mere formality, resulting in a forced vote in the House of Representatives.

Wars are the among the biggest destroyers of the environment and violators of human rights. Throughout history, we can see that wars happen because states over-emphasize and propagandize threats from other states, and cite the protection of their own state or allies as a justification to fight. Now is a crucial time to sincerely acknowledge this horrific reality of history.

If the forms pass now, the year of the seventieth anniversary of the end of World War II, Japan’s efforts over the years to be recognized as a nation that advocates peace will be undermined. Japan's Self-Defense Forces will be involved in wars, kill people, and be killed. In the international community, Japanese people will become targets, and it can be predicted that there will be increasing chances of acts of terrorism in Japan.

In regards to the deliberation process, we feel that the government would be highly careless to revise ten laws and enact a new law in just one Diet meeting. Is it acceptable to overturn the past seventy years of Japan’s foundation as a peaceful nation after just one meeting?

Many people have been protesting around the National Diet building. Over 90% of constitutional scholars believe the current, revised security reform bill is unconstitutional (source: Tokyo Shimbun, Asahi Shimbun, etc.).

The ruling party in government should not ignore the overwhelming opposition of citizens and constitutional scholars to the bill.

The environmental movement aims to protect not only the environment and biodiversity, but also protect human rights and peace, and create a society in which we can live fulfilling lives in safety and security. The security reform bill is an enormous threat to all of this.

We, along with others who earnestly aspire for peace, urge the government to abandon the bill.

(*)The revision of a total of ten laws including but not limited to the Armed Attack Situations Response Act, Peripheral Situation Method, Self-Defense Forces Law, UN PKO Law (United Nations Peacekeeping Operations Law), as well as the establishment of the International Peace Support Act.

The joint statement was endorsed by 223 organizations and 892 individuals (of which 181 people were associated with an NGO).