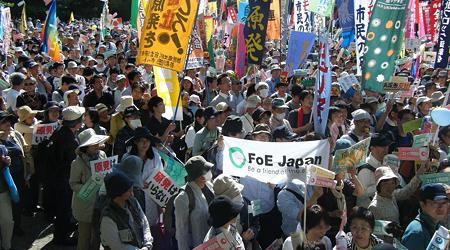 The “Innovative Strategy for Energy and the Environment” was announced on September 14 th . While the target is a “Nuclear phase out” by 2040, the contents include a continuation of reprocessing activity and a declaration to restart nuclear power stations. These actions could well preserve the previous nuclear energy regime, so the strategy is full of contradictions. It should be noted that the announced Strategy does not reflect the opinion of the majority (90%) of citizens , who submitted public comments solicited by the Japanese government. They want Japan to abolish nuclear energy at the earliest possible time before2030, with 80% favouring immediate phase out.

Denuclearization sometime in the 2030s sounds too slow if we consider the fact that 160,000 people have lost their homeland and many people are living with insecurity and fear of radioactive contamination due to the Fukushima Daiichi nuclear power disaster. Tens of thousands of citizens have joined protest movements in an expression of the will of the nation against the restarting of nuclear reactors. Radioactive waste has continued to accumulate through nuclear power operations.

The government should thus direct its resources to a policy focused on realizing zero nuclear dependence at the earliest date possible.

Clearly, the fact that the “Nuclear-free” goal is even included in the proposed strategy is solely the result of many citizens' publicly expressing their opinions. In its various forms, voiced opposition to stop restarting reactors and in favour of Zero Nuclear has pushed elements inside the government to resist the pressure of economic interests, who wish to maintain a pro-nuclear energy policy.

The most incomprehensible aspect of the proposed strategy is the policy to maintain the nuclear fuel cycle. In order to achieve denuclearization, reprocessing needs to be stopped immediately, and the establishment of treatment methods, including direct disposal, should be discussed. Maintaining reprocessing operations, which generate hazardous plutonium and the risk of greater radioactive contamination, means that these problems are never addressed. This just increases the burden on future generations. Decommissioning should commence at once.

It is stated that “Once confirmed safe, Nuclear power stations will provide an important source of electricity” but the current restart operation criteria, “Confirmation of safety is determined only when required”, have been weakened. Furthermore, the final decision has been entrusted to the Nuclear Regulation Authority (NRA). However, the legal authority of the commission has been thrown into doubt since its members were selected without meeting legal requirements. The Noda cabinet has tried to ram through the NRA's start without the endorsement of the National Diet, and such a violation of legal procedure casts doubt on the legitimacy of any committee rulings.

In addition, it is crucial to cooperate with the global community when reconsidering Japan's energy policy; however, the nuclear power technology export policy still remains. Considering that Japan has hardly found ways to guarantee the safety of nuclear power and disposal of nuclear waste, and the fact that it is not easy to abandon once the industry is established, Japan's export of nuclear technology must be seen not only as a major contradiction, but also an extremely irresponsible and unethical action.

The announced “Innovative Strategy for Energy and the Environment” policy seems to disregard the lessons from the Fukushima Daiichi nuclear power disaster: that damage is irreversible and this energy technology is beyond our ability to manage safely. Nor does it reflect the citizen's decision and resolution to radically change their energy consumption or their lifestyle. The climate reduction target is also weakened to 5 – 9 percent contrary to the 25% international commitment. Instead, the policy still follows a conventional economic growth model based on excessive energy consumption. The government should put forth an achievable vision of an environmentally sustainable and nuclear free society, and immediately lay out a practical path towards achieving this at the earliest date possible.