Watari, Fukushima and Beyond 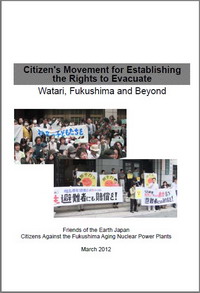 >Citizen's Movement for Establishing the Rights to Evacuate: Watari, Fukushima and Beyond (March 2012) (PDF)

Published by
Friends of the Earth Japan,
Citizens Against the Fukushima Aging Nuclear Power Plants

Translated by Friends of the Earth Japan


After a year since the nuclear disaster, high levels of radiation continue to threaten people in Fukushima, especially residents of Watari District in Fukushima City.

Although the government did not include Watari District in an official evacuation zone, broad areas of the district recorded levels of nuclear contamination equaling and even exceeding the permissible limit that the government used to evacuate residents in other municipalities.

Since the government and TEPCO refused to compensate evacuees from areas outside official evacuation zones, Watari residents faced a difficult choice: either to evacuate by bearing evacuation-related expenses for themselves or to stay in the district by fearing radiation exposure.

To solve this difficult situation, Watari residents and their support NGOs mobilized a civic movement to hold the government and TEPCO responsible for compensating voluntary evacuees.

This booklet documents a history of the movement and articulates the “right to evacuate” as the basic principle that should motivate the government’s evacuation and compensation policies.