By the All Japan 3.11 Action Committee

Soon it will be one year since the 3.11 TEPCO Fukushima Daiichi nuclear reactor accident. Many people were forced to evacuate and still continue to live under hardship without sufficient compensation.

Despite the fact that an increasing number of people (as high as 70%) of Japanese now wish to put an end to nuclear power, the Japanese government is obsessively promoting nuclear power even after the Fukushima accident. An unrealistic declaration made by Prime Minister Noda that the nuclear reactors had reached a state of cold shutdown and that this element of the power station accident had thus been brought to a conclusion; an inhuman policy which exposes children in Fukushima to the high level of 20mSV as a level for evacuation; the hiding of proceedings on initial government emergency meetings on handling the nuclear power accident; the ratification of the export of nuclear reactors through a majority vote by parliament members; and a strong push to restart nuclear power without any provision of appropriate safety measures….

Such policies are possible because “The Nuclear Village” is still holding unto its power over nuclear policy in Japan even after 3.11. What is at stake today is democracy in Japan.

While the government is unable to make a decision to put an end to nuclear power, the shock of the 3.11 accident has definitely changed the the minds of the Japanese people about nuclear power. At the moment, only 2 out of 54 nuclear power reactors are operating. If we manage to stop the restart of these reactors, all the nuclear reactors will be stopped in Japan by the beginning of May. We cannot afford to miss this opportunity which is made possible by the immense damage suffered by people in Fukushima due to the Fukushima Daiichi accident. If we managed to realize zero nuclear power in Japan now, it will certainly speed up the process of putting an end to nuclear power not only in Japan but also the world.

Those who have been promoting nuclear power such as electric companies, the Ministry of Economy, Trade and Industry (METI) and the Nuclear Industrial Safety Agency (NISA) are stepping up their pressure to restart Oi Unit 3 and 4 in Fukui prefecture. They intend to restart Oi Unit 3 an 4 as early as April. They are using a stress test which is a mere computer simulation exercise as a method to check the safety level of nuclear reactors. Such a process is supported by the experts, who have received donations from nuclear industries. It is also supported by the IAEA, which is a nuclear power promoting UN agency. Old standards on earthquake resistance and safety measures have been invalidated. To us, in absence of a thorough investigation of the causes of Fukushima Daiichi accident, a restart of any nuclear reactor is simply out of the question.

3.11, a year after the Fukushima accident, is an opportunity for all of us – the citizens of the world to demonstrate our will to put an end to nuclear power. On 3.11, a mass meeting will be held in Fukushima, and meetings and demonstrations will be held all over in Japan including a human chain to surround the Diet building. With our combined efforts, let’s force the Japanese government to not only take the political decision to not restart, but to immediately abolish nuclear power. Let’s move all of our governments to put an end to nuclear power. We appeal to all citizens in the world to come out on the street, make a human chain, and participate in this creative action. With one voice: “Let’s Support Fukushima! ” and “Good Bye to Nukes ” 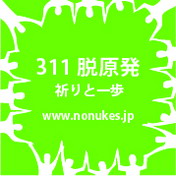