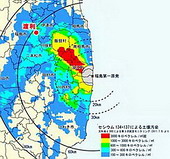 Watari District in Fukushima City is located about 60km from the Fukushima Daiichi nuclear power plants. 6,700 households of 16,000 people live in this residential area surrounded by trees and mountains along Abukuma River. The prefectural government office building is within walking distance.

The Government Ignored Concerns about High Levels of Radiation
From early on, high levels of radiation were detected in Watari District. In June 2011, for example, a survey by Fukushima City recorded 3.2-3.8µSv/hour at Hiragamori and Omamezuka sections of the district. On June 30, six NGOs jointly negotiated with the government to point out the urgent situation there. During the negotiations, the NGOs demanded that the government should immediately designate the entire district as a special evacuation area or at least hold an informational meeting with residents. However, the government merely stated that they would improve the quality of radiation monitoring.

Then, a government survey in early July confirmed that Watari District was severely polluted. At another round of negotiations with the government held in Fukushima on July 19, NGOs and Watari residents reiterated their concerns about high levels of radiation. The NGOs and residents also demanded that the government should hold an informational meeting to explain radiation risks to residents and to help them make informed decisions whether or not to evacuate, as well as proper compensations be provided for evacuees. But again, the government ignored people’s concerns and demands.

On July 24, Fukushima City tried to decontaminate the polluted areas, including streets that children use to walk to Watari Elementary School; however, decontamination did not yield satisfactory results. According to the city, air radiation levels decreased only by 30% or less after decontamination. In fact, approximately 2.0µSv/hour continued to be recorded at various places. Finally, the government conducted a detailed survey between August 18 and 22 to decide whether or not to designate the Oguraji section of Watari District as a special evacuation point. Nevertheless, this survey covered only a small part of Watari—about one tenth of the total number of households in the district.

NGOs Responded to People’s Concerns
In September, Citizens against the Fukushima Aging Nuclear Power Plants and Friends 4of the Earth Japan organized a series of seminars on radiation levels in Watari District, problems with the government evacuation policy, and health risks of low-dose and internal radiation exposure. A total of 310 residents participated in these seminars and engaged in heated debates. These seminars revealed that many residents were hesitant to evacuate because of their work and family situations, even though they constantly worried about high levels of radiation. It also became clear that these residents would have evacuated if the government had designated their households as special evacuation points or guaranteed compensations for voluntary evacuation.

In addition, on September 14, Citizens against the Fukushima Aging Nuclear Power Plants and Friends of the Earth Japan conducted a survey of air and soil radiation levels in Watari District with the help of Professor Tomoya Yamauchi (Kobe University). The survey not only confirmed that air radiation levels remained high in the district but also showed that the soil was severely polluted: soil radiation levels at four out of five sampling points were equivalent to zones of alienation in Belarus and Ukraine after the Chernobyl disaster. 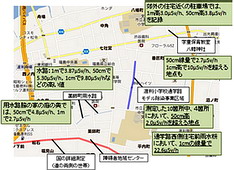 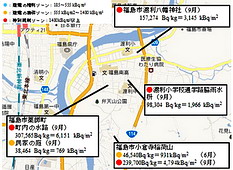 To respond to this urgent situation, Save Watari Kids, a NGO based in the district, submitted the following request to the Japanese government and Fukushima City on October 5: (1) designate the entire district as a special evacuation “area” (not “point” per household); and (2) adopt lower levels of radiation as criteria for evacuating households with children and/or pregnant women.

Inaction of the Government and the City Galvanized Watari Residents
On October 8, the Japanese government and Fukushima City finally held an informational meeting with residents in the Oguraji section of Watari District. Residents in other sections of the district were not informed about the meeting. At the beginning of the informational meeting, the government and the city reported results of the detailed survey. Radiation levels exceeding 3.0µSv/hour (equivalent to the government safe limit of 20mSv/year) were recorded at two houses, but they were not designated as special evacuation points because these two households expressed their unwillingness to evacuate. Since radiation levels at other houses were lower than the safe limit, the government and the city announced their intent to focus on decontamination rather than evacuation.

Watari residents were enraged because they felt that the government and the city stated their position without listening to their concerns and demands. Their anger was so intense that one Watari resident later remarked, “People of Fukushima are generally very quiet. I was surprised to see them expressing such anger.” Opinions and questions that Watari residents voiced at the informational meeting included the following:

-“The detailed survey covered only a part of Watari District. I request a survey of the entire district.”
-“Minamisoma City uses 2.0µSv/hour in designating a special evacuation point for children and pregnant women. Why does Fukushima City not use the same criterion?”
-“I have found several points that recorded radiation levels exceeding 10µSv/hour.”
-“When on earth are you going to start decontamination?”
-“Please help us evacuate children temporarily until decontamination is completed.”
-“If some people evacuate voluntarily, they should be compensated for their evacuation costs. If others decide to stay, they should be also compensated for risks of exposure to high levels of radiation.”
-“I want the entire district to be designated as a special evacuation area.”
-“Hold another informational meeting for all residents of Watari District.”
Yet, the government and the city refused to give clear answers.

On October 28, the frustrated Watari residents went to Tokyo to hold negotiations with representatives of the Nuclear Disaster Response Headquarters, the Ministry of Education, Science, Sports and Culture, and the Nuclear Safety Commission at the Upper House Diet Members Office Building. Although the government officials said they would take the residents’ concerns and demands seriously, they again refused to promise any policy changes.

So far, the government and the city have promised “thorough decontamination.” Since the surrounding mountains continue to feed polluted soil and water to Watari District, effects of decontamination are likely to be limited. It remains unclear when decontamination can start and how long it will take.

Temporary Evacuation for Children!
The government has delayed evacuation of children and pregnant women with the promise of decontamination. This policy can be said to violate human rights. At this very moment, children in Watari District live, study, and play in the severely polluted environment. Here, it is crucial to facilitate their temporary evacuation until satisfactory decontamination is accomplished.

We have launched “POKA-POKA Project for Fukushima Children” in response to the dire situation in Watari District. The project is jointly managed by Save Watari Kids, Fukushima Network for Saving Children from Radiation, Citizens against the Fukushima Aging Nuclear Power Plants, and Friends of the Earth Japan. The project focuses on Watari District as well as Onami, Nankodai, and Oguraji and aims to lower radiation exposure for children of families that have to stay in the polluted areas for a variety of reasons.

While going forward with the project, we will continue to lobby the government to change its evacuation policy. The government criterion for evacuation, 20mSv/year, is nearly four times as high as the safe limit in radiation-controlled areas. The evacuation criterion itself needs to be reconsidered.

This is not only Watari’s problem. The problem is also relevant to Fukushima and, indeed, Japan as a whole. Please help the project to protect Watari children. Thank you.