The following statement comes from the Friends of the Earth Asia Pacific meeting currently being held in Seoul, Korea. FoE groups present at the meeting have held a press conference to declare our commitment to a Nuclear Free Future. It included statements from Japan, Korea, Malaysia, Sri Lanka and Australia. 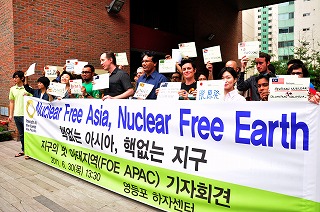 Several months after the Fukushima nuclear disaster, we are beginning to get a sense of the likely long-term impacts.

Radiation has spread across much of the northern hemisphere and parts of the southern hemisphere. Japan's Nuclear and Industrial Safety Agency estimates the radioactive release at 770,000 terabecquerels in the first week of the crisis. Total radiation releases will probably fall somewhere between 10-40% of those from the 1986 Chernobyl disaster. Radiation releases have not been stopped and will continue for some months.

The long-term cancer death toll will probably be somewhere between several hundred and several thousand. For comparison, a reasonable estimate of the Chernobyl death toll is 30,000.

Allowable radiation dose limits in Japan have been thrown out the window, both for emergency workers and for the general public.

Estimates of the economic costs of the disaster range from $50 billion to $130 billion - but it wouldn't be surprising if the true costs are considerably greater.

Between 100,000 and 150,000 people cannot return to their homes because of radioactive contamination. Some may be able to return before the end of this year but permanent relocation is a likely outcome for those who lived in the most contaminated regions. Legal and political battles will take decades to play out.

Nuclear power has no part in building a climate-friendly and sustainable future.

A large and growing number of scientific studies have detailed the wide range of energy supply and energy efficiency options that can be deployed to meet energy demand while sharply reducing greenhouse gas emissions.

The claim that nuclear power is a necessary or desirable part of the fight against climate change must be rejected. Nuclear power is at most a very partial and problematic response and presents unresolved and unacceptable problems.

Uranium is the first link in the toxic nuclear fuel chain, and is the primary source of radioactive materials used in nuclear reactors and nuclear weapons. Many uranium mines have had serious adverse impacts on the environment and the communities that live near them.

Nuclear power plants around the world have already experienced many problems caused by phenomena which are likely to become more frequent and more severe as a result of climate change - as seen in Japan. The nuclear industry has been very slow to address these problems. Meanwhile the nuclear power industry continues to survive because of huge taxpayer subsidies.

There is not a single permanent repository for spent fuel or high-level nuclear waste anywhere in the world and nuclear power is the one and only energy source with a direct and repeatedly-demonstrated connection to the proliferation of Weapons of Mass Destruction.

A clean energy future, based primarily on renewable energy and energy efficiency and conservation measures, is viable and affordable.

Friends of the Earth Asia Pacific is calling for Government's in our region like Korea, Japan, Malaysia, Sri Lanka and Australia to transition into nuclear free societies.