Almost a quarter of the world’s land area and a sixth of its population are affected by desertification. In 1994, United Nations Convention to Combat Desertification was adopted to promote cooperation on this problem.

We are all connected to the problem desertification, both as part of the cause and victims of its effects. But people who live distant from the most affected areas often are not really aware of its seriousness.

Together let us learn more about desertification through efforts to green the desert. FoE Japan’s “Greening the Desert Project” is working with locals to plant grasses and trees in Nei Mongol (Inner Mongolia) the nearest area to Japan seriously affected by desertification. 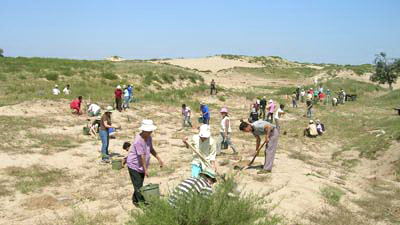