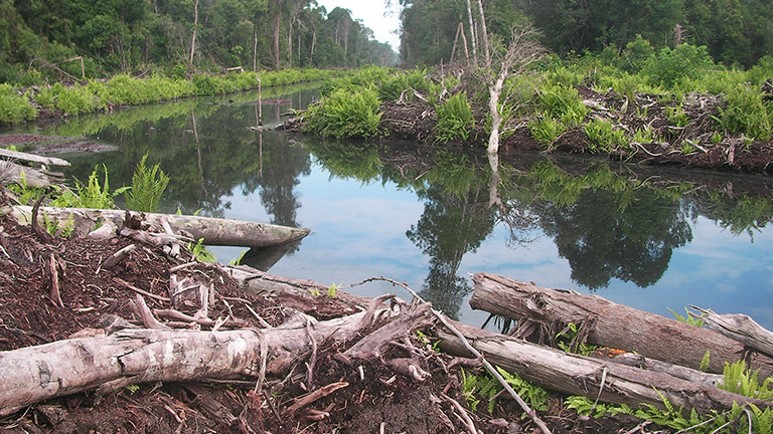 As NGOs that have been working on climate change and forest conservation, we believe that it is crucial to use renewable energy to prevent climate change and secure energy from well-distributed and democratic energy sources. However on the other hand, we fear that some of the biomass projects utilize fuels that are involved in large-scale destruction in forestation, land grabbing, biodiversity loss, and human rights violations. They may also emit large amounts of greenhouse gases (GHG) based on an Life-cycle assessment (LCA).

In order to acknowledge biomass power generation businesses, we believe they must fulfill the requirements listed below, and those that do not fulfill them must not be considered as renewable energy or be a target of the Feed-in Tariff system (FIT).

We believe that biomass power should make use of regional waste and unused materials in a small-scale distributing, cogenerating system, instead of importing resources from abroad in a large-scale.

We hope that truly sustainable biomass power is going to be promoted that respects human rights and aims to accomplish the Sustainable Development Goals (SDG) as well as the 1.5 degrees goal from the Paris agreement.

3. It does not use palm oil or other plant oils
Oils such as palm oil and soy oil are not used, as the production of such oils involves in large-scale change in land use and causes deforestation. In addition, oils that emit large amounts of GHG during the production process and that may conflict with their use as food, such as canola oil are also not used.

4. It does not violate human rights
It ensures that the human rights of residents and workers are not violated during the process of fuel production including land acquisition.

6. It avoids spreading of contaminated substances
It avoids violating the health of nearby residents, including the use of fuel that contains heavy metals and radioactive substances that are harmful to the human body, and ensures that it is monitored appropriately.


[Commentary]
1. It reduces emissions of greenhouse gases (GHG) sufficiently and surely
The purpose behind the promotion of renewable energy under the FIT system while burdening electricity users is to reduce greenhouse gas emissions. However, the FIT system up until now does not include the GHG emission assessment. In fact some of the projects certified by the FIT system emit as equivalent or even higher GHG than fossil fuels.
For example, according to an article by the Ministry of Economy, Trade and Industry, there are numerous biomass power generation fuels that have the equivalent or higher GHG emissions than fossil fuels, even when excluding change in land-use. 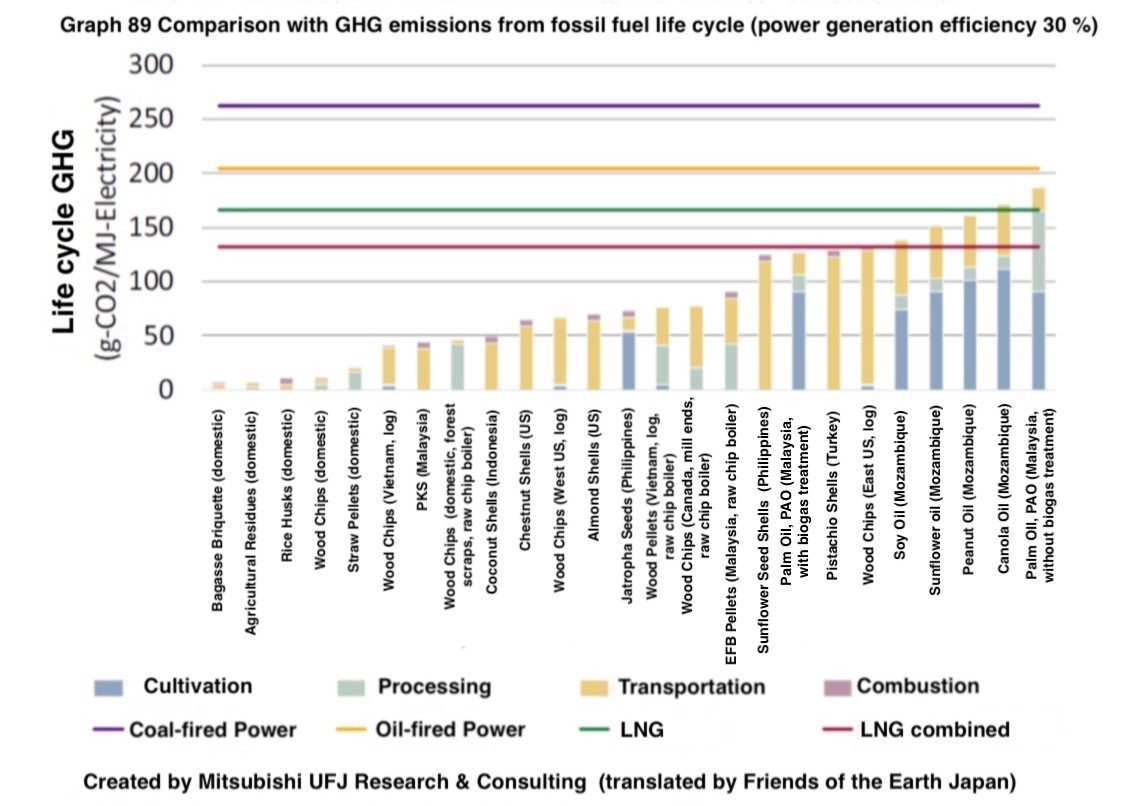 Furthermore, when change in land-use takes place during the cultivation of fuel (development of tropical forests and peatlands), there is a significant increase in GHG emissions. (In comparison to no change in land-use: development of tropical forests = 5 times more with palm oil, development of peatlands = 139 times more with palm oil and 112 times more with Palm Kernel Shell (PKS)). In addition, importing fuel from a remote location will have higher GHG emissions due to transportation, which therefore should be avoided.
The FIT system must utilize LCA to evaluate the effects of the reduction in GHG, and adopt GHG emission standards just like how Japan and other countries already have GHG emission standards for biofuel. Based on the GHG emission standards, The FIT system should only approve projects with more than 50% of reduction effects compared to LNG thermal power generation.
In the FIT system, certification systems such as the Forest Stewardship Council (FSC) and the Roundtable on Sustainable Palm Oil (RSPO) are adopted to ensure sustainability. However, such certifications are only made for industrial use of wood or use as food and therefore are not made to evaluate the use as fuel. Accordingly the certifications used in the system do not ensure the decrease of GHG emissions.

2. It does not accompany deforestation and reduction of biodiversity
The earth is currently facing serious biodiversity crisis. According to a report the Intergovernmental Science Policy Platform on Biodiversity and Ecosystem Services (IPBES) published, one million species will become extinct within the next few decades due to human activity. One of the biggest direct causes is said to be the change in land use. Specifically, tropical forests in South East Asia and Latin America are pointed out. In South East Asia, the development of oil palm plantation, the raw material of palm oil is said to be the main cause of deforestation.
To use as fuel for biomass power generation, wood chips and pellets from North America and South East Asia have been imported, which as a result has led to mass deforestation in some areas. It is also concerned that mass conversions of plantations result in deforestation, loss of wild life habitat and disasters such as mudslides due to a decline of water retention in the mountains. According to the SDGs’ target 15.2, deforestation is to be prevented by 2020. Deforestation discharges the carbon stored in forests in a stable way, and loses its source of absorption. In addition, it greatly affects basic environmental services including regional soil and water environment.

3. It does not use palm oil and other plant oils
{GHG Emissions}
If palm oil is used as a raw material for power generation, it will produce the equivalent to or more GHG than LNG thermal power generation in the process of cultivation, processing, transportation and combustion based on LCA even without considering the change in land-use. Not only palm oil, but also using other plant oils will emit large amounts of GHG during production, processing and transportation, and cannot expect sufficient reduction effect compared to fossil fuels.
{Deforestation}
One of the main reasons for rapid expansion in deforestation of tropical rainforests in Indonesia and Malaysia is due to the increase in demand of palm oil and the expansion of oil palm plantations. In the past 20 years, 3.5 million hectares of tropical rainforest in Indonesia and Malaysia have been converted into oil palm plantations. When a tropical rainforest composed with many species of trees is cut down for an oil palm plantation, wildlife such as orangutans and elephants loses their habitats and it results in biodiversity loss.
{Increase in demand}
By utilizing palm oil as a fuel for biomass power generation, the demand for palm oil will rapidly increase. Currently in March 2018, the total capacity of the palm oil power plant projects approved by the FIT system is 1700 MW. If all were to be run, 3.4 million tons of palm oil would be burned each year, and this is nearly five times more than Japan’s palm oil import (750,000 tons). This will have a huge impact on the environment.
{Certifications}
Using the RSPO certification is not a sufficient method to confirm deforestation. The principle of RSPO (Principle 7.3) originally stated that areas such as native forests and High Conservation Value (HCV) forests have to be protected from the development of palm oil plantations, but secondary forests could be used for development of these plantations. In November 2018, however, in order to protect secondary forests and natural forests, a new policy that follows the guideline of “No Deforestation, No peat, No exploitation (NDPE)” was introduced, resulting in the improvement of the policies by ensuring that deforestation does not occur through reclamation of plantation. Yet, this policy only applies to new plantation reclamations, and therefore preexisting plantations can be still converted from forests.
Since the farmland that can be cultivated is finite, the use of RSPO certified-oil as fuel for biomass power generation must also take into account the "indirect impact" of the forest development pressure.
In addition, the government-led MSPO (Malaysia Standard for Sustainable Palm Oil) and ISPO (Indonesia Standard for Sustainable Palm Oil) only verify legality and cannot prevent deforestation.

4. It does not violate human rights
A large area is required when producing crops for the raw material of biomass fuel. In securing the land for use, the farmland of local residents and shared forests are used. This is a big problem because it may take away the foundation of the residents’ lifestyle. Moreover, there are cases where the production violated rights of farm workers and their families (including children), and therefore it is critical to ensure that there is no violation of human rights. The respect for human rights is also required in the Guiding Principles on Business and Human Rights.

5. It avoids conflict with use as food
Crops that can be consumed as food should not be used as a raw material for biomass power generation. For example, palm oil, soybean oil, sunflower oil, peanut oil and canola oil fall under such crops. It is possible that the situation will change over the period of 20 years (which an average power plant operates for), even if there is a surplus at this moment. It is also important to make sure that there is no conflict with food production in land and water use or with other uses such as animal feed.

6. It avoids spreading of contaminated substances
From the perspective of the health of nearby residents and preventing the spread of contaminants, it must ensure and appropriately monitor that the fuel for biomass power generation does not contain any heavy metals and radioactive substances that are harmful to the human body. Currently, there are no standards for the concentration of radioactive substances contained in the fuel for biomass power generation and thus the measurement of the wood and ash is left to the operator.

8. It ensures transparency and traceability
Information on 1-7 must be disclosed. Traceability to the farm or plantation area for fuel must be also secured.
Especially regarding PKS with rapid import growth, it is currently unconditionally eligible for the FIT system but should not ignore the GHG emissions during the production process of PKS as it already has a certain market value. The PKS from farms that are involved in the land use change and especially farms where peatland development was carried out is inappropriate as a subject of the FIT system because they emit a large amount of GHG emissions (112 times more compared to when there were no land use changes). It must also avoid human rights violations of workers and procurement from farms where child labor exists, even by-products and residues. For this reason, traceability is essential for by-products and residues to ensure sustainability.