A leading travel agency in Japan, H.I.S Co., Ltd. currently plans to build a biomass power plant in Kakuda city, Miyagi. This biomass power plant is considered problematic by a number of environmental and social researchers and organizations, as it plans to be operated with palm oil. Production of palm oil has been severely criticized all over the world, due to its environmental and social impact to producing countries, like Malaysia and Indonesia.

On February 5, 2019, Friends of the Earth Japan, together with other organizations like Biomass Industrial Society Network and Rainforest Action Network submitted our letter to request the cancellation of the power plant. This letter was also signed by local organizations in Miyagi that have been protesting the project.

We will continue to work on this issue to bring environmental and social justice. 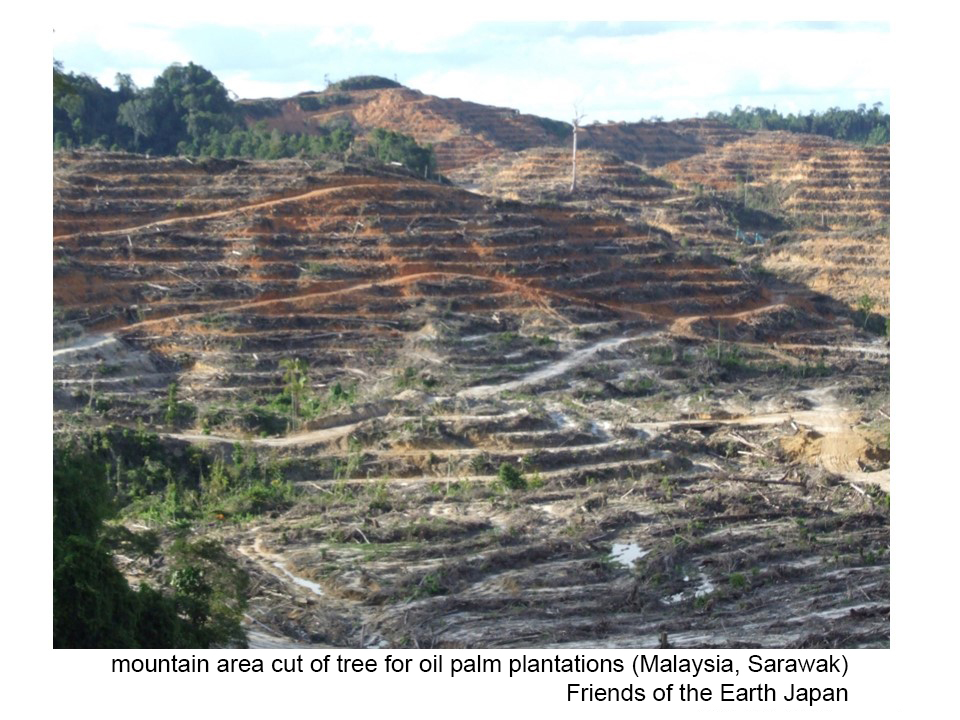 We have conveyed our concerns a number of times to the president of H.I.S. SUPER POWER Co. Ltd., Mr. Akao already, but are disappointed to know that you have not reconsidered the construction plan. Production of palm oil has been severely criticized worldwide because of its environmental impact. It emits a massive amount of greenhouse gasses, and causes destruction of tropical forests with wide biodiversity, through the loss of peat land as well as forest fires caused by plantation development. It also destroys the forest and the peat land that rare species, like orangutans, inhabit and creates social problems such as human rights violation of farm workers by forced labor and land conflicts by plantation development.

The Roundtable for Sustainable Palm Oil (RSPO) was created to solve these problems and now, in the Feed-In Tariff system (FIT), only the RSPO approved oil can be used for power generation. According to the research entrusted by the European Commission, the CO2 emission from palm oil goes above the CO2 emission from coal when it is used as biomass fuel, with palm oil being 231g CO2-eq/MJ and coal 90.6gCO2-eq/MJ. This indicates that power generation with palm oil is not suitable for renewable energy. With this reason, in the United States it is not permitted to use palm oil as fuel, and movements in Europe to restrict palm oil are growing stronger as well.

In Japan, the Ministry of Economy, Trade and Industry included in the “Biomass Power Generation Guideline” that only RSPO certified oil could be used for power generation, and they plan to continue having discussions about the sustainability of palm oil as fuel. RSPO certification is going to be revised this year, and it is expected that standards in regards to society and the environment will become stricter, making receiving and renewal of the certification more difficult.

Based on this, construction of power plants that use palm oil as fuel is inappropriate when considering sustainability, and it may also risk your business.

It is very unfortunate that you help realize people’s dreams of visiting tropical forests while at the same time contributing to the destruction of the forests themselves.

Concerned about climate change and hoping for a true recovery from the Fukushima Daiichi Nuclear Disaster, local environmental organizations in Miyagi have been seeking for truly sustainable energy that does not bring any negative impacts on the environment and society of producing countries. Kahoku Shimpō, the newspaper in Miyagi where Kakuda city is located, published an article that we have attached here, which has been evoking a great response from the local community. At the assembly in Kakuda city on December 20, the city council asked a number of questions to the city mayor and requested to withdraw from the project.

Your corporate philosophy is “to contribute to the advancement of world peace and mutual understanding by increasing the knowledge of people around the world through tourism, and thereby overcoming the differences of nationality, race, culture and religion,”and H.I.S SUPER POWER claims that they “aim to provide clean and sustainable energy that does not harm the environment.”

Keeping this corporate philosophy and claim you have made in mind, we request, again, that you cancel the construction of the palm oil power plant in Kakuda city.

We hope that President Sawada will make the right decision.

Signed by 15 organizations and 27 individuals