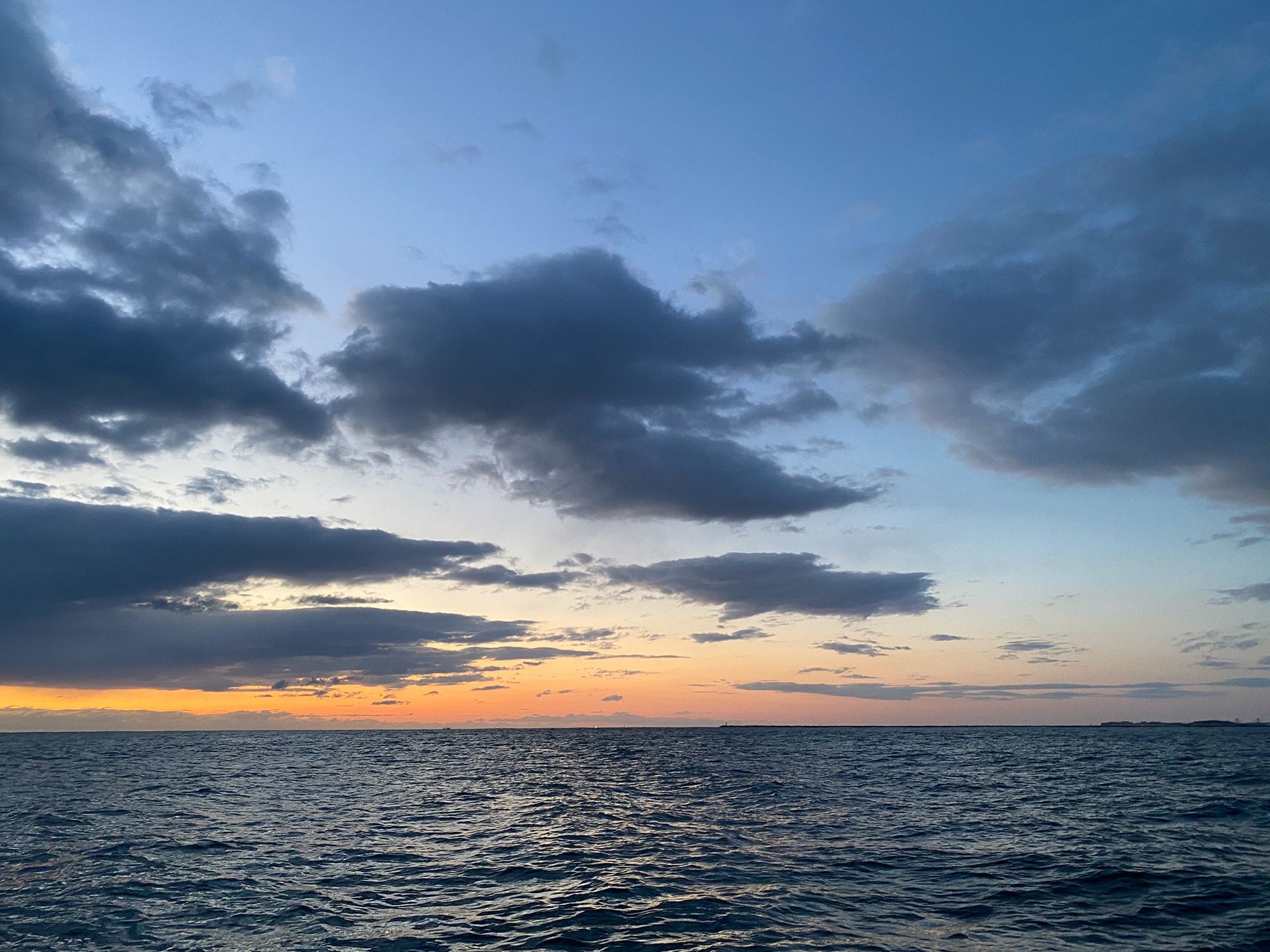 Recently there have been many reports on TV and the newspaper regarding the ‘treated water’ from Fukushima Daiichi Nuclear Plant that continues to increase in volume.
The storage capacity at Fukushima Daiichi is reaching its limit, and a government’s committee has come out with a report stating that “the most realistic option is to release treated water into the ocean.” Is this really the case? Compiled below are answers to the most commonly asked questions regarding this issue.


*Treated water can be accurately described as ‘water that has been treated using ALPS, but that still contains radioactive elements.’ This will be shortened and herein be referred to as ‘treated water.’
Water contamination occurs when fuel debris cooling water and groundwater flowing into the reactor building and turbine building get mixed together. At the Fukushima Daiichi Plant, this contaminated water is treated with the Advanced Liquid Processing System (ALPS), and stored in tanks (see diagram above). This is referred to as ‘treated water.’ There are already 979 storage tanks, and over 1.19 million cubic meters of treated water is being stored (as of March 12, 2019). 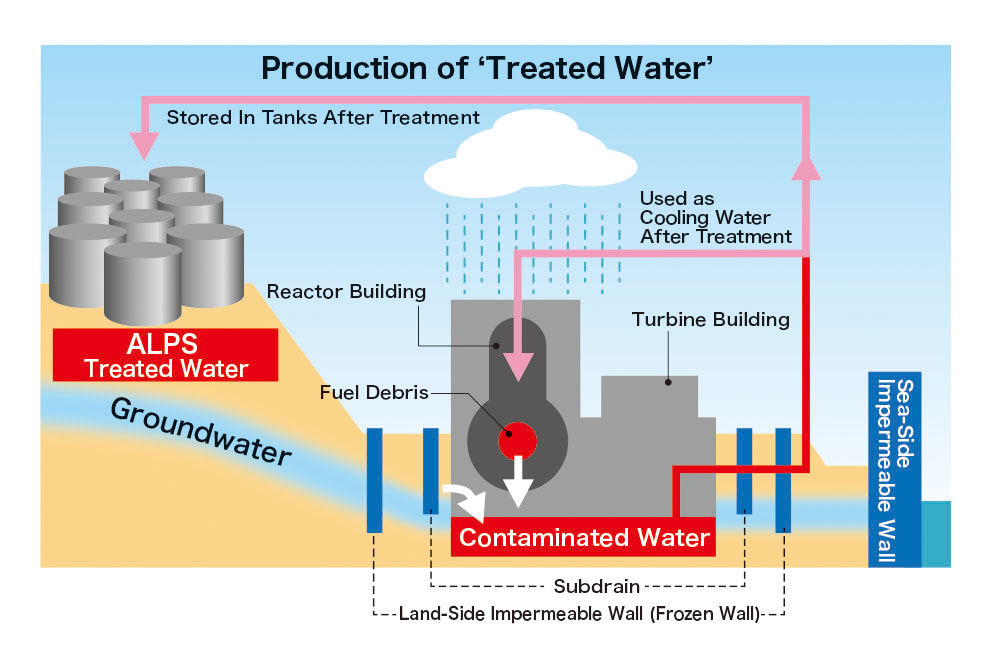 According to TEPCO’s calculations, treated water contains 860 trillion becquerels of tritium. In 2010, before the Fukushima Daiichi nuclear disaster, 2.2 trillion becquerels of tritium were being dumped into the ocean from Fukushima Daiichi Plant. The current amount that can be found in treated water is 390 times more. It was thought that radioactive elements other than tritium could be removed through ALPS. For this reason, TEPCO and the Ministry of Economy, Trade, and Industry referred to it as ‘tritium water.’ However, a media found out that other radioactive elements such as Iodine-129, Ruthenium-106, and Strontium-90 were being detected in treated water above regulatory levels. Currently, from the treated-water being stored in tanks, concentrations of 62 radionuclides not including tritium have been found to surpass emission standards, with the highest levels reaching 19,909, times regulatory levels (see diagram below). TEPCO says that contaminated water will be treated a second time before being released into the oceans, and that all radionuclide concentration levels will be below current regulatory standards.

Tritium is also known as tritiated hydrogen and is an isotope of hydrogen. It is made up of one proton and two neutrons. Tritium is a radioactive element with a half-life of 12.32 years that decays into helium by beta-decay. It only releases 18.6keV of energy, which is 1/30 of the 512keV, the maximum amount of energy that can be released by Cesium-137. Tritium occurs when cosmic rays interact with atmospheric gases, and exists naturally as tritiated water. There has been an increase in tritium as a byproduct of nuclear testing and nuclear plants.

Expert opinions on the effects of tritium are divided. The government states that “because tritium is similar in nature to hydrogen, it has not been confirmed that tritium accumulates within people or other living things.” However, there have been findings that state the following effects of tritium. Tritium can replace hydrogen atoms of organic compounds. Tritium bioaccumulation occurs as it progresses through the food chain. When tritium replaces hydrogen atoms within the human body the in-vivo half-life is extended, and it affects surrounding cells. When tritium replaces hydrogen atoms in DNA, the tritium disintegrates into helium and damages DNA.

(Q5)Is releasing treated water into the oceans the only realistic option?

The government calculates that land within the plant facilities that is available for storage tanks will reach capacity in the summer of 2022. However, dumping water into the oceans is not the only viable option. ‘Citizen’s Commission on Nuclear Energy’, a think-tank involving plant engineers has suggested other options such as ‘large tanks for long-term water storage’ and ‘solidification by mortar.’

(Q6)What are the benefits of storing treated-water in large tanks?

The proposal is to install large tanks with a capacity of 100,000 cubic meters with domed roofs and watertight-vents. The proposal states it will choose a location for these tanks from sites, with consent from the local people; the planned site for reactors 7 and 8, the sandpits, the backlands. 20 large-scale tanks will be built on land approximately 800 meters by 800 meters, and by replacing the pre-existing tanks for these large-scale ones, it will make it possible to store 48 years worth of newly treated water (daily volume 150 cubic meters). Large-scale tanks have been used in many situations such as for the storage of oil, and are known to be durable.

(Q7)What does the ‘Solidification by Mortar Proposal’ Entail?

This method has been used to dispose of contaminated water at the nuclear facilities at Savannah River Site in the US. The benefits are that this method can semipermanently cut off any risk of contaminated water leaking into the ocean. The radioactive elements in the contaminated water will continue to decay even in solid form. This means that safety can be assured even in the future when the concrete and mortar start to degrade. However, since cement or sand is added to the contaminated water, the volumetric efficiency is cut down to 1/4. Even then, a land area of 800 square meters should be enough to store approximately 18 years worth of solidified treated water.

In the northern part of the facilities, there is a soil dumping area, and it has been noted that this area could be used. The radioactive cesium found in the soil is similar to contaminated soil that has undergone the decontamination process. The Ministry of Economy, Trade, and Industry ’s Subcommittee on Handling of the ALPS Treated Water has debated on whether or not there is not enough land space. The subcommittee stated that “if there is not enough space, Fukushima Daiichi Plant’s property area can be expanded” and that “the soil dumping area could be used, if the soil from the dumping area is moved to an interim storage facility adjacent to the premises.

(Q9)What do the people in the fishing industry think?

Local fishermen as well as Mr. Tetsu Nozaki, head of the Fukushima Prefectural Federation of Fisheries Co-operative Associations have repeatedly voiced their opposition. “We’ve worked so hard to rebuild life here, and if something were to happen, it would be devastating to the fishing industry,” stated Takayuki Yanai, head of a cooperative of fisheries in Onahama.

(Q10)What about public opinion in Fukushima?

According to a survey of people over the age of 18 conducted in collaboration between Asahi Newspaper and Fukushima Broadcasting, 57% of people are against the discharging of diluted ‘treated water’ into the ocean.