To: Minister of Environment Tamayo Marukawa

Urgent Petition: “No” to the Policy “To Use Contaminated Soil (Less than 8,000 becquerel/kg) for Public Works”—
Don’t Contaminate the Environment, Don’t Force Radiation Exposure on the Entire Population

Sign now via Google Forms (for both individual and group signatory) 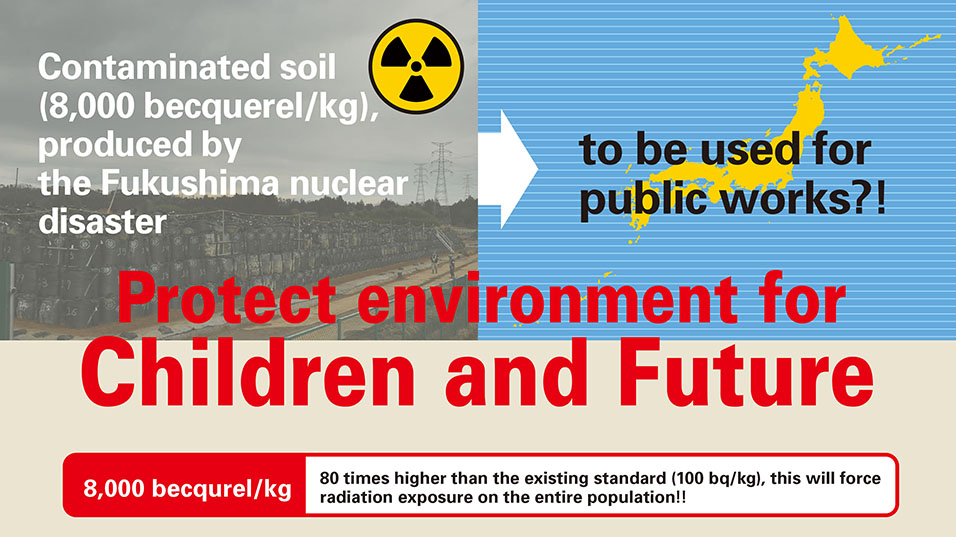 On March 30, the Ministry of Environment (MOE) Investigative Committee on Strategy for Technological Innovation for Reducing and Recycling Temporalily Stored Contaminated Soil decided to allow the use of contaminated soil (lower than 8,000 becquerel/kg) for public works nationwide with “proper containment measures.” The committee argues that the additional effective dose for residents will be less than 10µSv/year, but the Nuclear Reactor Regulation Act that specifies 100 becquerel/kg or less as the threshold for reusing concrete and metals from nuclear power plants. MOE’s latest policy increases the threshold eightyfold.

Moreover, the Working Group on Safety Evaluation of the Effects of Radiation within the investigative committee met behind closed doors, and its meeting minutes have not been published. In fact, the goal of the committee is to increase an amount of radioactive waste for reuse in order to decrease an amount for final disposal. The committee seems to consider it inevitable to expose the entire Japanese population to radiation to implement the infeasible policy of “decontamination and repatriation” for Fukushima residents.

MOE boasts that “the reconstruction of Fukushima and the Tohoku region not only constitutes a crucial project for the renewal of Japan but also will become an unprecedented source of knowledge and experience to be shared with international society.” But “proper containment measures” is unrealistic. Even strictly managed disposal sites contaminate their surroundings and groundwater; how can public works, which are not as strictly as managed, prevent contaminated soil from spreading radioactivity? Indeed, rainfall, erosion, and disasters can damage public works to trigger a significant release of radioactivity in the environment. Construction work will also expose laborers to radioactivity. If a huge earthquake occurs, roads will be damaged, exposing radioactive waste to the air. This is indeed a “national project” to force radiation exposure on the entire Japanese population, including children. We cannot, and will not, allow it.

1. Retract the policy to use decontaminated soil, which contains radioactive waste, for public works.
2. Rethink the goal of the policy to “decontaminate and repatriate.”
3. Enlist wider participation from people inside and outside Fukushima Prefecture in deciding on issues related to decontamination and disposal of decontaminated soil.
4. Disclose all information regarding the Working Group on Safety Evaluation of the Effects of Radiation, including the names of members, meeting minutes, and reference materials.