Today, Kagoshima Prefectural Council approved a petition for the restart of two reactors at the Sendai Nuclear Power Plant, while rejecting 31 petitions opposing it in some ways (e.g. outright opposition, calling for caution, demanding more research and the inclusion of more local residents as stakeholders). Given the council’s approval, Kagoshima Governor Yuichiro Ito is expected to express his support for the restart of the nuclear reactors sometime soon.

At the Special Committee on Nuclear Safety Preparedness on November 6, some council members offered detailed explanations, with a sense of great urgency, for why the nuclear reactors at Sendai should not be restarted: (1) informed consent from local residents was not obtained yet; (2) the Nuclear Regulation Authority (NRA) was still in the process of reviewing safety procedures and plans for reinforcement installation, (3) who would take responsibility in case of a nuclear accident remained unclear; (4) the Fukushima nuclear accident was not over yet, and many people were still suffering from it; (5) the Volcanological Society of Japan acknowledged the difficulty of predicting a large-scale eruption and recommended that NRA revise its guidelines for assessing the risk of volcanic hazards to nuclear power plants; (6) “national wealth” would mean people in Kagoshima enjoying their beautiful natural environment; and (7) Kagoshima Prefecture could immediately start an effort to revitalize the local economy and community without relying on the nuclear industry. Nonetheless, the majority in the council – the Liberal Democratic Party and Komeito – proceeded to approve the restart of the nuclear reactors.

In addition, many local residents expressed their opposition to the restart of the Sendai Nuclear Power Plant at five public seminars held in Kagoshima Prefecture. Thus, the prefectural council’s “approval” did not really reflect its constituency’s voice.

As members of the opposition pointed out at the council meeting, there are many reasons that the nuclear reactors at Sendai should not be restarted, whereas there is no reason for expediting their restart. At present, evacuation plans for local residents have so many problems; for example, temporary evacuation sites and emergency shelters are located in “dangerous areas” according to the Japanese government’s tsunami, landslide, and other hazard maps. This is a potential violation of the Basic Act on Disaster Preparedness, and even local municipalities (i.e. Satsuma-Sendai, Izumi, Akune, Ichikikushinoki) acknowledge this problem.

It is therefore nonsensical that Kagoshima Prefectural Council and Governor rushed to approve the restart of the nuclear reactors by ignoring these problems. We deeply regret that Kagoshima Prefecture disregarded the dissenting petitions from local residents, and that “approval in absence of the public” became a precedent for the restart of other nuclear reactors in Japan.

Appendix: Five reasons we should not restart the Sendai Nuclear Power Plant

(ii) At a public seminar held in Satsuma-Sendai City on October 9, 2014, nine out of ten speakers stated strong skepticism and criticism against the restart of the Sendai Nuclear Power Plant. Similarly, at a public seminar in Hioki City the following day, all the nine speakers expressed their opposition to the restart. While many more participants were raising their hands, the hearing was adjourned. The national and local governments used these seminars merely to explain the safety review report on the Sendai Nuclear Power Plant to local residents, not to receive feedback from them. This lack of mechanisms to incorporate opinions of local residents in a decision on the restart is problematic because a nuclear accident would affect the surrounding areas for a long period of time and possibly force local residents out of their homes forever. To address this problem, FoE Japan and other NGOs both inside and outside Kagoshima submitted signatures calling for public hearings and discussions (not merely public seminars). 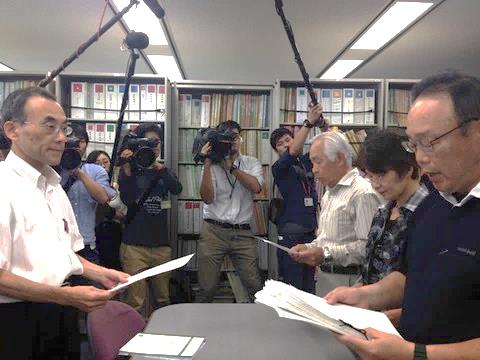 (iii) Prior to the restart of a nuclear reactor, “approval by the local community” is required. While Kagoshima Prefecture argues that this approval pertains only to Satsuma-Sendai City and itself, this is totally inadequate, given the range of municipalities that would be affected in case of a nuclear accident. In fact, in response to demands from residents, city councils of Ichikikushikino and Hioki, both adjacent to Satsuma-Sendai, adopted resolutions calling for the expansion of the definition of “the local concerned community.” We believe that this definitional expansion, as well as the creation of mechanisms for public participation, is absolutely necessary.

Evacuation plans have serious problems. On September 12, the Cabinet Office’s Nuclear Disaster Prevention Conference approved evacuation plans for the Sendai Nuclear Power Plant as “concrete and rational.” However, it is questionable whether the plans are operationally effective because they are limited to a 30km radius from the plant, as well as they fail to consider the possibility of a compound disaster, the necessity of evacuation for home patients and other vulnerable groups outside a 10km radius, and the locations for screening and decontamination.

For example, home patients who reside within a 5km radius and require assistance are expected to evacuate to nearby facilities. One of the evacuation facilities, an old building of Soro Elementary School, is located only 1.6km away from the nuclear power plant. Besides, this evacuation facility stores only the amount of fuel that can last for four days. In case of a nuclear accident, evacuees at this facility will likely be abandoned, and they are expected to receive maximum 190mSv of radiation doses in two days, according to the Nuclear Regulation Authority’s simulation.

3. The safety review has serious problems

While the Nuclear Regulation Authority (NRA) was reviewing the safety of the Sendai Nuclear Power Plant, it received about 18,000 public comments. Nonetheless, NRA ignored comments that were critical of its safety review. The limited scope of NRA’s safety review practically guarantees the restart of the nuclear power plant; for example, nuclear emergency responses are excluded from the review. Particularly problematic is NRA’s handling of risks related to volcanic eruptions, as elaborated in the following.

(i) Southern Kyushu has multiple calderas, including Aira Caldera encompassing Sakurajima, and about 7,000 years ago, massive volcanic eruptions occurred off the coast of Kagoshima. Many volcanologists thus warned devastating effects of a volcanic eruption on the Sendai Nuclear Power Plant. Since traces of past pyroclastic flows were found only several kilometers away from the plant, even Kyushu Electric Power Company (KEPCO) acknowledged the possibility of a pyroclastic flow reaching the plant, and NRA proceeded with its safety review accordingly.

NRA’s Guidelines for Volcanic Risk Assessment consider (a) whether the risk of a pyroclastic flow reaching an operating nuclear power plant is sufficiently low and (b) whether an operator has adequate plans for stopping a plant and taking out fuel rods when symptoms of a volcanic eruption are detected. However, KEPCO has not demonstrated that the risk is sufficiently low with regard to (a), and it has merely stated its “policy to take out fuel rods” without specifying details with regard to (b), not to mention the feasibility of detecting symptoms of a volcanic eruption in a timely manner. In fact, experts warn that after stopping a plant, “it will take at least five years” to cool fuel rods, take them out, and transport them to a safe place. It is thus problematic that NRA did not enlist volcanological experts in its safety review of the Sendai Nuclear Power Plant, even though the risk of volcanic hazards was the key issue. We therefore believe that NRA should redo its safety review on the volcanic risk.

(ii) KEPCO has so far stated its “overall policies” on preparedness for potential volcanic hazards without detailed operational planning. The company is expected to prepare a “construction plan” to demonstrate that the facilities of the Sendai Nuclear Power Plant will be sufficiently anti-seismic to meet NRA’s new standards, and to include in its “safety rules” the procedures for cooling fuel rods, the methods of taking them out, and the location of their storage if symptoms of a volcanic eruption were detected. But KEPCO’s safety rules contain no detailed discussion of operational responses to such an emergency situation.

4. There is no shortage of electricity

According to the Federation of Electric Power Companies of Japan, there was 10 % surplus electricity even during the peaks of electricity demand between July and August 2014: Japan had enough electricity without any operating nuclear reactor. At this juncture, KEPCO suspended access to its grids for any more new producers of renewable energy, beginning on September 25. KEPCO argued that its grids could be overloaded with the expected amount of electricity generated by solar and wind power, more than 16 million kWh, that could meet the summer peak demand - with the expansion of grid capacities and the introduction of mechanisms to balance supply and demand, renewable energies will be able to replace nuclear energy. In reality, however, KEPCO has allowed only 4.1 million kWh of electricity by solar and wind power to be introduced in its grid. Here, KEPCO’s decision to suspend access to its grids seems to be related to its plan to restart the Sendai and Genkai Nuclear Power Plants.

5. The Fukushima Nuclear Accident is not over yet

At this moment, contaminated waters continue to leak, and no viable countermeasure has been found. More than 100,000 evacuees are also still living away from their homes. In fact, we still do not know the real cause of the Fukushima nuclear accident. And yet, the government and KEPCO are trying to rush the restart of the Sendai Nuclear Power Plant by ceremonially conducting “safety review,” offering “public seminars,” and obtaining “approval by the local community.” We argue that forcing the restart of the nuclear power plant this way is completely unjustifiable.