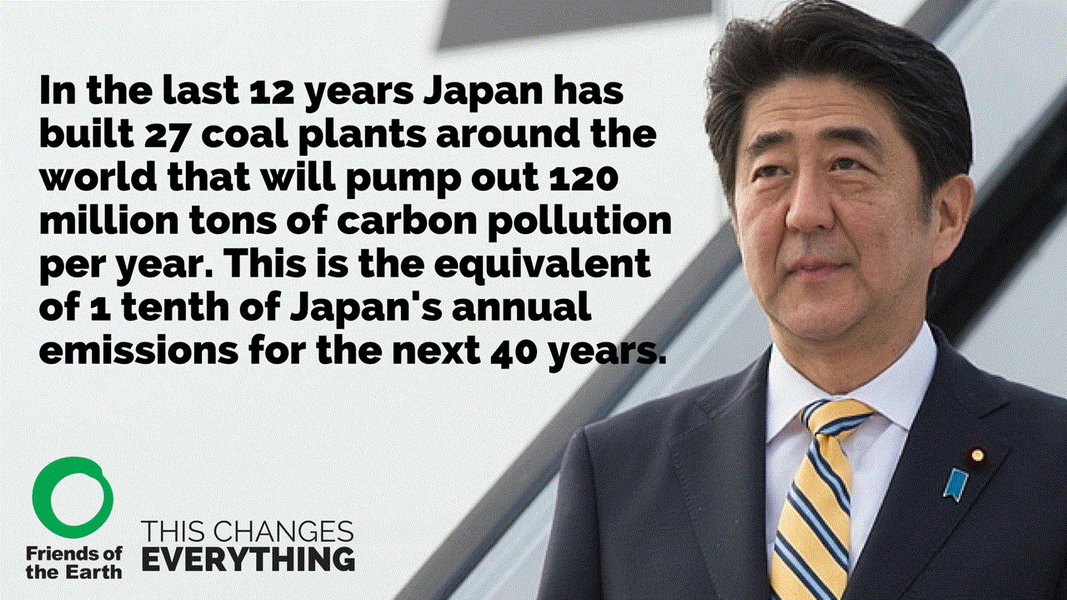 The government draft policy for climate change, unveiled formally on June 2 and will be finalized by the end of July, assumes more than a quarter of Japan’s electricity in 2030 coming from coal fired power, and one fifth from nuclear power despite Fukushima disaster and strong oppositions throughout the nation *1). PM Abe’s policy has also created a coal-power-frenzy as 43 plans have been announced so far *2) to build new coal fired power plants (some of them touted to power the 2020 Tokyo Olympics.) His government also pushes for exporting Japan’s “highly efficient and clean” coal and nuclear technologies - a main pillar of his economic recovery plan called “Three Arrows” - as climate friendly finance.

Japan is the world’s fifth largest GHG emitter, and just above a quarter of cuts by 2030 from the current level *3) is seen neither fair nor equitable a share of Japan’s responsibilities *4). Scientists are warning that we are heading toward more than a three degrees Celsius warmer world than today. In order to avoid catastrophic climate change rich nations must phase out fossil fuels in less than two decades. These new coal plants will continue to pump large amount of pollutions decades beyond. Accidental risks, radioactive wastes nowhere to go, and numerous testimonies from over 100,000 Fukushima evacuees still in refuges away from their homes should be enough reason for Japan to shift its top priorities towards clean energies.

Japan is the top coal plant financier of public money among G7 and the rest of the richest nations *5), and a top nuclear plant builder worldwide. Japan’s exported coal plants are neither ‘clean’ nor ‘safe’ according to recent studies including one made by FoE Japan. A recent study indicates pollutions from planned coal plants in South East and East Asia will add over 40,000 fatalities a year by 2030 *6).

Growing global movement *7) against coal power in Asia and all over the world is now calling for PM Abe in Elmau to end financing risky technologies and shift towards ambitious actions against climate change through clean and safe energy.