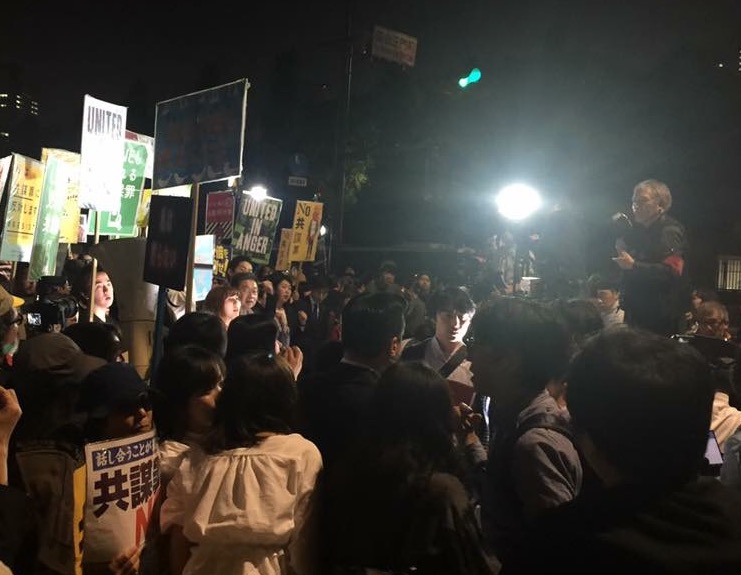 On June 15th 2017, so-called “anti-conspiracy bill” passed the Japanese Diet's upper house despite strong opposition and concerns. The passage of the bill bypassed the normal voting in an upper-house committee without addressing many concerns. We strongly protest the forcible passage of the bill as it is an obvious violation of the democratic legislative process.

Regarding the conditions in which a vote may be skipped, Article 56-III of Japan's Diet Law stipulates, "A House may, in case of necessity, call for an interim report by a Committee on a pending matter." And "… [t]he House may, in case of urgent necessity, set a time limit for the Committee consideration and if the consideration has not been completed within that time, the House shall begin to consider the matter in a plenary sitting." In the case of the anti-conspiracy bill, however, there is every reason for thoughtful deliberation, and there seems to be no reason for skipping it because the situation demands "necessity" or "urgent necessity."

Considering that the ruling coalition hasn't been able to provide an appropriate reasoning for the bill, most of which remains vague, the passage of the bill is nothing but the violation of the democratic legislative process.

The anti-conspiracy bill poses a severe threat for ordinary citizens and civil organizations as its scope of implementation may be broadened to crack down on civil activities under the strengthened state surveillance powers.

As many have pointed out, Japan has already entered into anti-terrorism treaties and the existing laws can be implemented against homicide, robbery, and usage of explosive materials. The necessity of the bill remains highly suspicious.

Even though the anti-conspiracy bill passed the House, the freedom of speech and expression must remain intact. Likewise the right to resist against unjust policies must be fully guaranteed.

In today's global society in Japan and around the world, many development projects are being pushed through forcibly in the name of 'the state.' People are rising up to protect the livelihood and natural environment of their communities. In some cases the life and death struggles continue against all odds.

We, FoE Japan will continue working in connection with many others to bring about a sustainable society where everyone can live together peacefully and in harmony with nature.