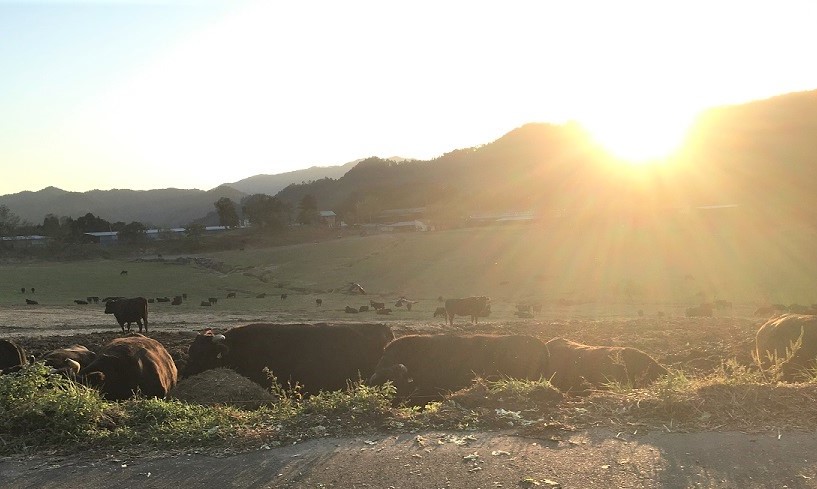 A herd that survived the 2011 disaster, Ranch of Hope, Namie Town, Fukushima

Nine years have passed since the Great East Japan Earthquake and tsunami struck the Tohoku region on March 11, 2011, and the ensuing accident at the TEPCO Daiichi nuclear power plant. The impacts of this nuclear accident continue to this day.
Radiation contaminated a large area and has had serious impacts on the environment and the livelihoods that so much depended on the natural environment.
The nuclear accident robbed people in the region of many things: livelihoods, a purpose in life, community, precious time with friends and neighbors, and a peaceful daily life. The very foundations of their lives were taken away.
“Nuclear power robbed us of everything. We still can’t go into the forests. Families with children used to go into the forest to gather wild plants and teach about nature. That was a common practice, taken for granted. But today we can’t do any of that.” Those are the words of Kenichi Hasegawa, a former dairy farmer who is now growing buckwheat (soba).
Meanwhile, in the midst of much fanfare about reconstruction efforts and the Olympics, the real status of radioactive contamination and damage from the disaster is being kept out of view, and an atmosphere has been created where people cannot talk about health impacts and other concerns.
“In Fukushima today, the Olympics are being exploited to the maximum in an effort to make it difficult to see the issues facing evacuees from damage from the accident, which continue to this day,” says Ruiko Muto, a resident of Miharu Town.

Lifting of evacuation orders, Olympic torch relay
One after another, the government is lifting evacuation orders in the affected area. On March 4, evacuation orders were lifted in so-called “difficult-to-return zone” around Futaba Station, Futaba town on the Joban Line of East Japan Railway Company. On March 5 it was the area around Ono Station in Okuma town. On March 10 it was the area around Yonomori Station, Tomioka town. On March 15, the Joban Line trains will start running. And at the end of March, the Olympic torch relay will be passing through these areas where evacuation orders were lifted.
According to studies by Fukushima Prefecture, radiation doses far exceeding the decontamination standard of 0.23 microsieverts per hour have been observed along roads and the Olympic torch route, including 0.46 microsieverts per hour in Koriyama city and 0.77 microsieverts per hour in Iitate. According to surveys by the Radioactivity Monitoring Center for Citizens (Chikurinsha) and the Fukuichi Area Environmental Radiation Monitoring Project (Fukuichi = TEPCO Fukushima Daiichi nuclear plant) at 69 sites along the torch relay route and surrounding area, readings exceeded 0.23 microsieverts per hour at 62% of all survey sites, and high levels of soil contamination were found at seven sites, where readings exceeded one million Bq/m2. These areas are where evacuation orders have already been lifted, and residents are living there in some cases. This leaves one the impression that the need to protect people from radiation exposure is not being treated seriously enough.

“Is this what reconstruction looks like?”
Even where evacuation orders have been lifted, the return of residents has been very slow. The occupancy rate is below 30% in areas where evacuation orders have already been lifted (this number even includes decontamination and nuclear plant deconstruction workers, “reconstruction” business-related personnel and new residents). Young people are not returning, and in many areas the majority of households consist of one or two elderly persons.
“In my neighborhood, more and more houses are being torn down. There is virtually no trace of the original community. Is this what reconstruction looks like?” Those are the words of a 91-year-old man who returned to live in Tomioka.
Despite this, housing and other forms of assistance for evacuees is steadily being terminated. In March 2020, the provision of free housing stopped for evacuees from “difficult-to-return zones” with the exceptions of the towns of Futaba and Okuma. Among the affected 2,274 households, 221 of them still have no prospect of securing housing for April onwards.
Regular thyroid gland testing by Fukushima Prefecture for persons who were under the age of 18 at the time of the accident has found 237 persons diagnosed with or suspected of thyroid cancer, of which 186 cases of thyroid cancer were confirmed by surgery (numbers based on publicly available materials, up to February 13, 2020). However, we know that many cases have been overlooked, so the real numbers and medical cases of thyroid cancer are not always as stated officially. A prefectural committee stated that the results of the first and second rounds of testing were “tens of orders of magnitude higher than the number of cases estimated from disease statistics, etc.” and “It is difficult to consider the impacts of the accident.” Some experts claim that “over diagnosis” is one reason so many cases of thyroid cancer are being detected, but doctors who performed surgeries have stated that many patients had lymph node metastases and that it had spread to surrounding tissue, and that surgery is required in both cases.

Reuse of contaminated soil arising from decontamination work, ocean release of contaminated water
There are also efforts to make “contaminated soil” arising from decontamination work disappear from view. (This is soil that has been removed from populated areas and farmland as a result of decontamination work. It contains low-level radioactive material.) Japan’s Ministry of the Environment has announced a policy to “reuse” 14 million cubic meters of contaminated soil in public works and agricultural land development projects. The Ministry intends to begin implementing the related regulations in April. But what is not clear is whether sufficient information will be disclosed and explanations provided to residents.
Residents in many communities have vociferously opposed these plans. A demonstration project for an agricultural road in Nihonmatsu, Fukushima, was cancelled due to intense opposition from the community. The Ministry is planning a demonstration project to use contaminated soil as roadbed fill to expand the Joban Expressway to four lanes in Odaka Ward (Minamisoma City), but all heads of the local administrative districts are opposed.
The volume of processed contaminated water from the Advanced Liquid Processing System (ALPS) at the Fukushima Daiichi nuclear plant site continues to grow. Already 960 tanks are storing 1.16 million cubic meters of treated water.
Alternative proposals have been made to store the contaminated water in large tanks on land, to use mortar solidification, and to expand the current site, but the government committee that examined the treatment of contaminated water has submitted its final report, concluding that discharge into the ocean is a viable option, even without having adequately considered the alternatives proposed.

Need a shift to victim-centered reconstruction efforts
A huge amount of funding is currently being allocated to decontamination and infrastructure work, as well as for roads and sports facilities for which the demand is not even assured. Meanwhile, housing and other assistance for evacuees from the disaster is being terminated, there has been almost no other effort to protect people from radiation exposure other than specific decontamination efforts. It is, in fact, citizen groups are really the only ones that are conscientiously providing protection or services for victims to rest and recuperate. Nuclear disaster victims are being pushed into the corner in the name of reconstruction, with government efforts to reduce the official numbers of evacuees and to deny the impacts of radiation exposure.
We call upon the government of Japan to honestly face the current impacts of the nuclear disaster, to implement policies for full compensation for all victims of this nuclear disaster, and for real reconstruction efforts to restore the victims’ lives and dignity. We join with people around the world to stand with together the victims and continue working towards a peaceful world without nuclear power and nuclear weapons, with the aim of ensuring that the catastrophe of a nuclear accident is never repeated.