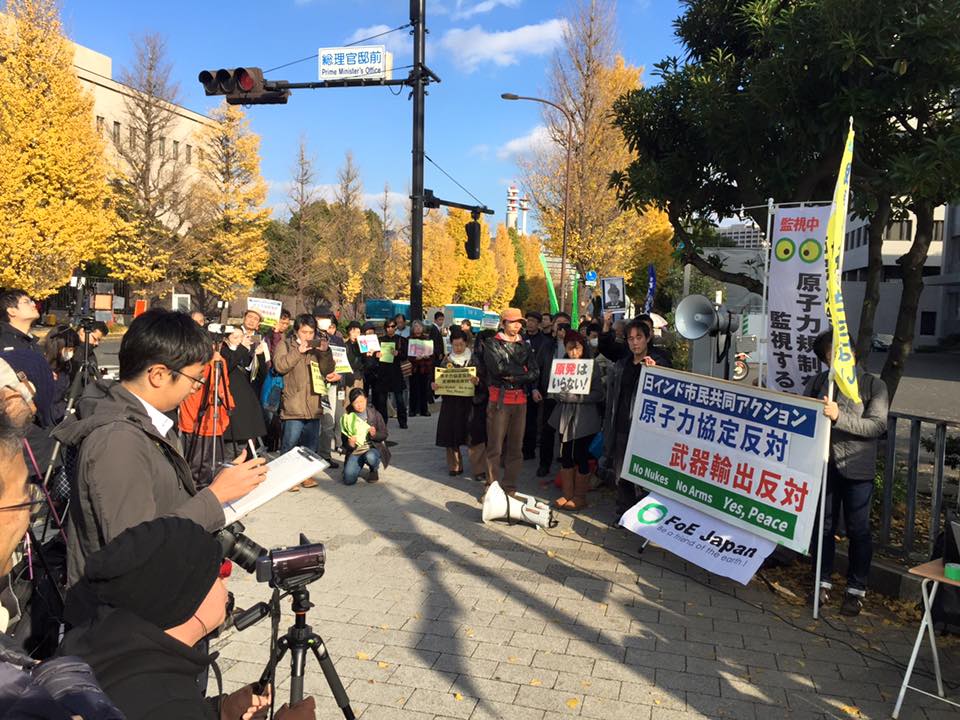 Today, December 12th 2015, it is reported that Indian Prime Minister Modi and Japanese Prime Minister Abe inked the Memorandum of Understanding on the bilateral nuclear agreement1
Before the summit, several media reported that “(it seems that Japan gets) the assurance that India will not transfer reprocessed spent fuel (which is to be produced by the nuclear power plant exported by Japan) to the military”2. Also, that “Japan to include the suspension clause in the bilateral agreement in case that India conducts nuclear testing3”. However, as of now, the text of MoU is unclear.

At any rate, if the bilateral agreement is signed, that means Japan makes a bilateral nuclear deal with a non-NPT party state. That greatly blackens the value of nuclear abolition which apparently Japan regards as a national credo. Being bombed by the atomic weapons during war, if Japan concludes the agreement with India which is outside of both NPT and CTBT, that will be understood as Japan admitting India as a nuclear weapons state - therefore greatly harming the entire international effort for nuclear abolition.

If Japan allows India to reprocess spent fuel which is to be produced by Japanese-origin nuclear power plants, that would be the first case in the history of Japanese bilateral nuclear agreements. Even if Japan can assure that India will not transfer the materials to military usage, still the agreement will allow India to extract more plutonium. This could be also a threat to the world.

The agreement also fuels the arms race between Pakistan and India. That will make south Asian security more unstable.

Furthermore, while victims of the Fukushima accident have not been compensated enough, and the nuclear industry is no longer economically and socially reasonable, it is unethical to export nuclear power to other countries only to save the Japanese nuclear industry.

As of now, 22 nuclear power plants are running in India. At the sites where nuclear power plants stand or are planned to stand, local people have protested against nuclear power. At Kudankulam and Jaitapur, civilians who engaged in non-violent protest were ruthlessly oppressed by the authority which resulted in several casualties and death.

While India has a high potential for renewable energies which are more characteristically decentralized energy sources, and energy efficiency is still to be improved, promoting nuclear power with massive capital investment would pose great risks on local people and harm their livelihoods.

We, FoE Japan, are against promoting nuclear power and arms exports which will only benefit some companies and will harm both Indian and Japanese society.

We urge international cooperation for achieving an environmentally sustainable future not for destructive military technology and nuclear power.