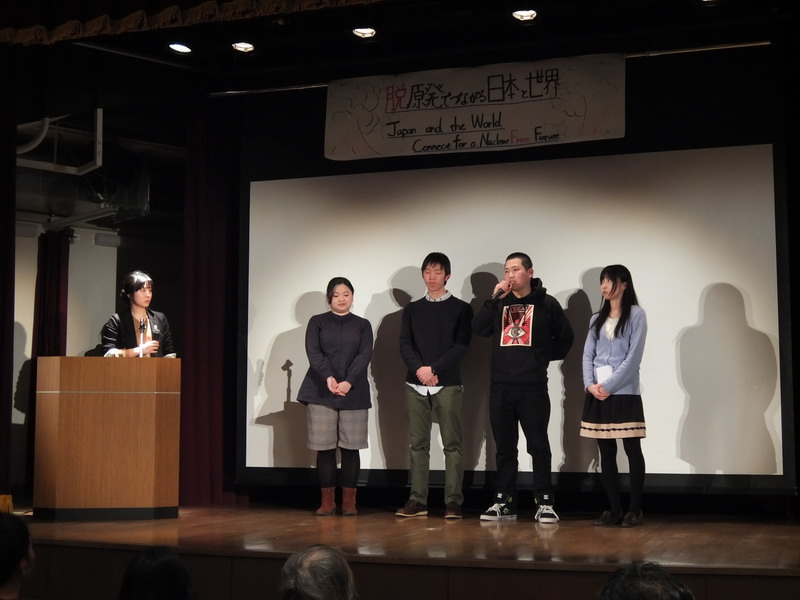 Four years have passed since that day on March 11 when the Great East Japan Earthquake and Tsunami struck, soon followed by the Fukushima Nuclear Disaster.

Many people lost their precious lives. Homes were destroyed; jobs, a purpose in life, the joy that comes from being in touch with nature, and ties among communities and families all disappeared. Even now, over 100,000 people are forced to live far from their homes in unfamiliar surroundings.

The nuclear disaster has yet to end. Large amounts of radioactive substances continue to pollute the mountains, rivers, towns, and oceans. This impacts not only humans but also all living things. Over 100 children in Fukushima have been diagnosed with, or are suspected to have, thyroid cancer. Many children who have undergone surgery display severe symptoms such as lymph node metastasis.

Since September 15, 2013, not one of Japan's nuclear power plants has been in operation. We have enough electricity without them. Many citizens have been calling for a nuclear-free society. However, the Japanese government ignores these voices and instead insists upon a policy to maintain and even promote nuclear power.

After the March 11 disaster, countries such as Italy and Germany made a dramatic policy shift to abandon nuclear power. However, others such as Turkey, India, Bangladesh, Indonesia and Russia are moving toward introducing nuclear power plants, or building more. In Lithuania, despite a majority of voters rejecting the introduction of nuclear power plants at a national referendum, the plan for their construction continues unabated.

We must not ignore the devastating reality of nuclear disasters. Irresolvable nuclear waste must not be the legacy we leave future generations.

Now is the time for all of us, who have taken this opportunity to gather to mark the fourth anniversary of the Fukushima Nuclear Disaster, to bear witness to the damage caused by the nuclear disaster and to call for international solidarity to realize a world without nuclear power.

Let the legacy we leave our children be a safe, peaceful society free of nuclear weapons and nuclear power plants. For that, we must cross borders, connect, and take action.