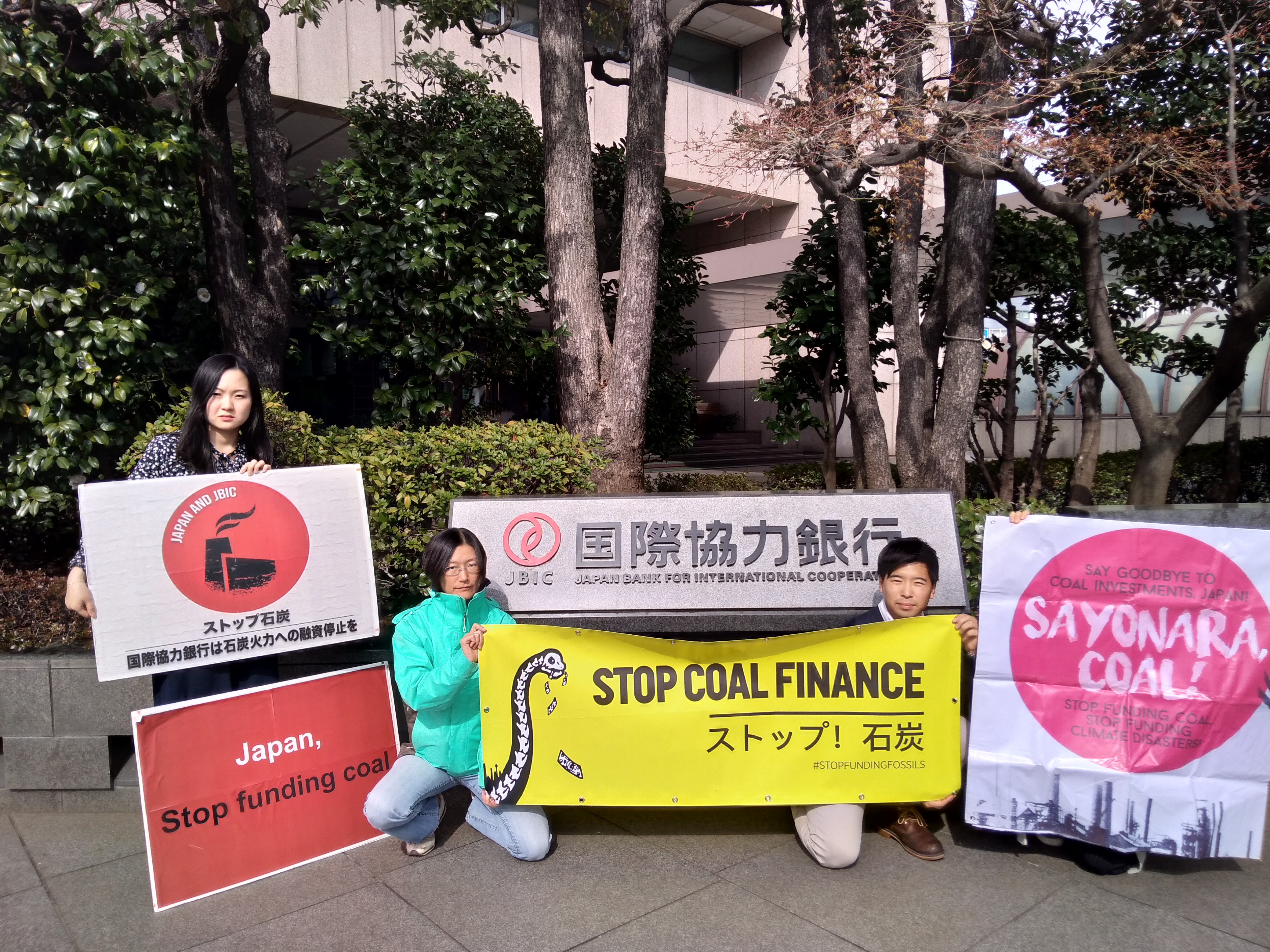 Today, Friends of the Earth Japan submitted the petition to Japanese Export Agencies to condemn them for supporting a coal-fired power plant project in Van Phong, Vietnam. This letter was signed by 78 organizations in 39 different countries.

A number of environmental NGOs, both national and international, have been voicing concerns and sent petitions to JBIC, yet JBIC decided to finance without giving us appropriate explanations. > Please read our letter for the further information.

We, the undersigned organizations, condemn the decision of the Japan Bank for International Cooperation (JBIC) and the Nippon Export and Investment Insurance (NEXI) to finance the Van Phong 1 coal-fired power station in Vietnam, and we urge the JBIC and NEXI to rescind their decision. We also demand that the Government of Japan stop financing coal-fired power projects immediately.

As neither criteria applies to Van Phong 1, JBIC should not support this project.

In addition, mercury is not well considered in the ESIA. According to JBIC, the mercury emissions is below detection limit and thus in the ESIA, the emissions of mercury is shown as “0”. However this is far from the truth. Based on the UNEP Mercury toolkit, one of the methods the Minamata Convention recommends, if power plants with specific air pollution control devices combusted typical Indonesian or Australian coal, they would emit around 50kg of mercury per year. This means that even if the mercury emissions was controlled using the best available technology (BAT), mercury emissions might cause a significant environmental and social impact. Therefore, mercury emissions should be declared and assessed in the ESIA and communities in the area should be made aware of the risks this mercury could pose to their health. Even if mercury emissions are calculated, further public consultation and stakeholder engagement must be conducted.

The JBIC Guidelines stipulates that JBIC may deny financing for a project where a project proponent fails to undertake appropriate environmental and social considerations. The guidelines state, “JBIC also refers to standards established by other international financial institutions, other internationally recognized standards, and/or standards or good practices established by developed countries such as Japan as benchmarks”. This project clearly violates these guidelines.

Community’s voices are not respected
In addition, the ESIA of the project has not been disclosed to the local people appropriately. While it is a large scale project posing significant adverse effects, not enough information is provided to the relevant stakeholders. Such local people who have concerns about the impacts by the project have not been invited to any consultation or informed about the ESIA; they have never been provided the opportunity to appropriately participate in the decision-making process of this project. This is clearly a violation of JBIC’s own guidelines stating, “in preparing ESIA reports, consultation with stakeholders, such as local residents, must take place after sufficient information has been disclosed and ESIA needs to be made available for them at all times.”

Japan must phase out coal domestically and internationally
The Japanese government and corporates including JBIC are already involved in or considering supporting other coal-fired power plant projects such as the Vung Ang 2 coal power project in Vietnam, the Kosova e Re coal project in Kosovo, and the Indramayu coal power project in Indonesia. While there exists renewable energy alternatives and people suffering from climate change, exporting old polluting technologies is unacceptable.

The impact of climate change has been more severe than ever in any part of the world, including Japan. Last year, heat waves and landslides killed many people in Japan. The IPCC report published last October revealed that we do not have much time left to avoid climate catastrophe. We need to make a transition into a decarbonized society and phase out from coal as soon as possible.

Globally, the people’s movement calling for climate action has become bigger and stronger - a number of developed countries have already committed to coal phase-out, and students have taken to the streets calling for radical climate action.

However, Japan is still one of the largest providers of government support for coal. This would lead to Japan’s isolation in the international community and would bring diplomatic risks to Japan. Japan has a huge historical responsibility for climate change. Exporting coal power is not how climate leaders show their leadership.

We urge the Japanese public financial institutions, JBIC and NEXI, to withdraw from supporting the Van Phong 1 coal-fired power plant project, and urge the Government of Japan to stop financing coal anywhere in the world.