Water Contamination by Hexavalent Chromium Continuously Found around the Japan-involved Nickel Projects in Palawan and Surigao del Norte, the Philippines
------ The Result of Water Analysis in the dry season of 2018 (Written by FoE Japan in September 2018)

Friends of the Earth (FoE) Japan, with the cooperation of a Japanese citizen’s expert, has been continuously analyzing the water quality in the areas of the Nickel Processing Plant Projects and the Nickel Mining Projects since 2009, which the Japanese companies have got involved in (Refer to Table 1 below). It is found that hexavalent chromium or Cr (VI) detected in the rivers and the springs has exceeded the Japanese environmental standards around Taganito, Claver, Surigao del Norte as well as Rio Tuba, Bataraza, Palawan.

As described in detail below, the results of the water quality analyses in each area in April and May 2018 have also proved the real situation of serious water contamination by hexavalent chromium in the both areas of nickel projects. Hexavalent chromium is known as high toxicity due to carcinogenicity, liver damage, and skin disease etc.. From the viewpoint of preventing the long-term health damage and ensuring the security and life of the local people in the future, the project companies must establish and implement any immediate and effective anti-pollution measures. In addition, the Japanese companies and public agencies concerned are required to ensure the compliance of the same level of Japanese standards, so that they don’t export the pollution with “double standards” under the weak governance or regulation of the local government. 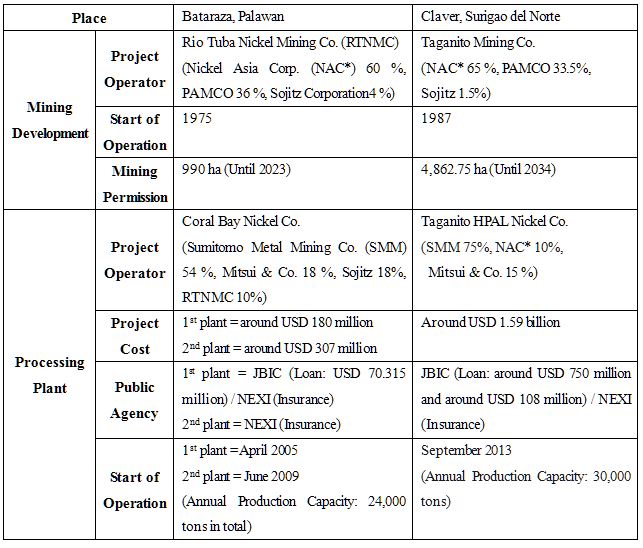 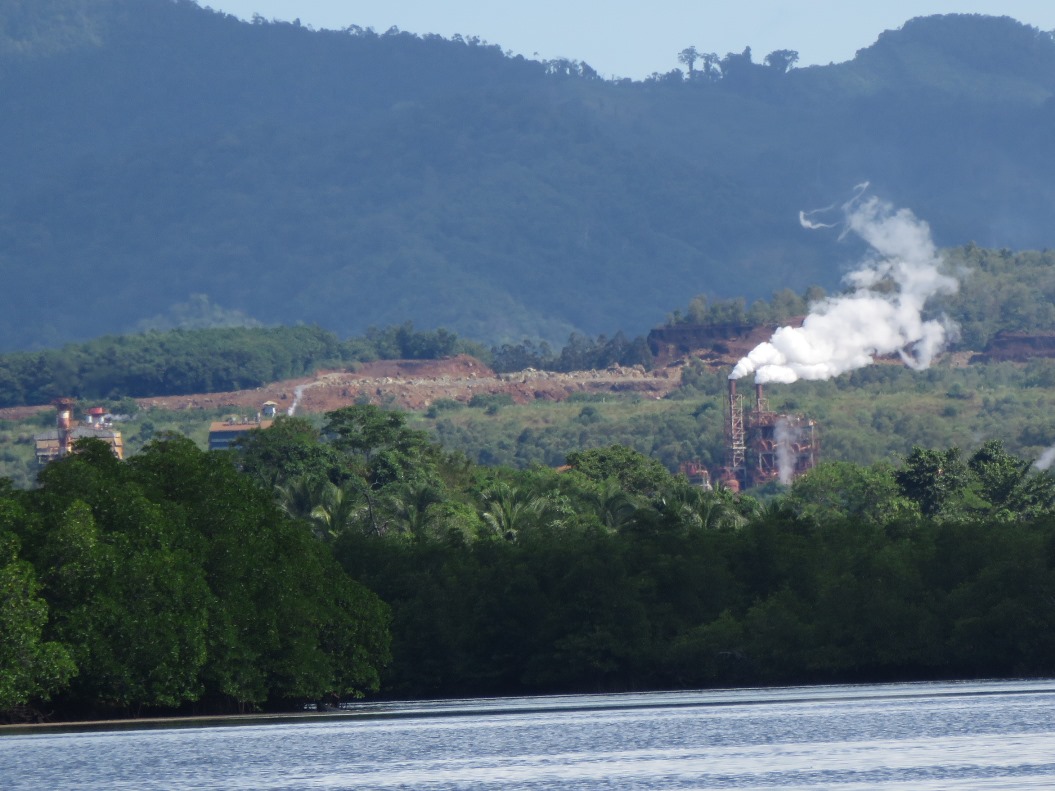 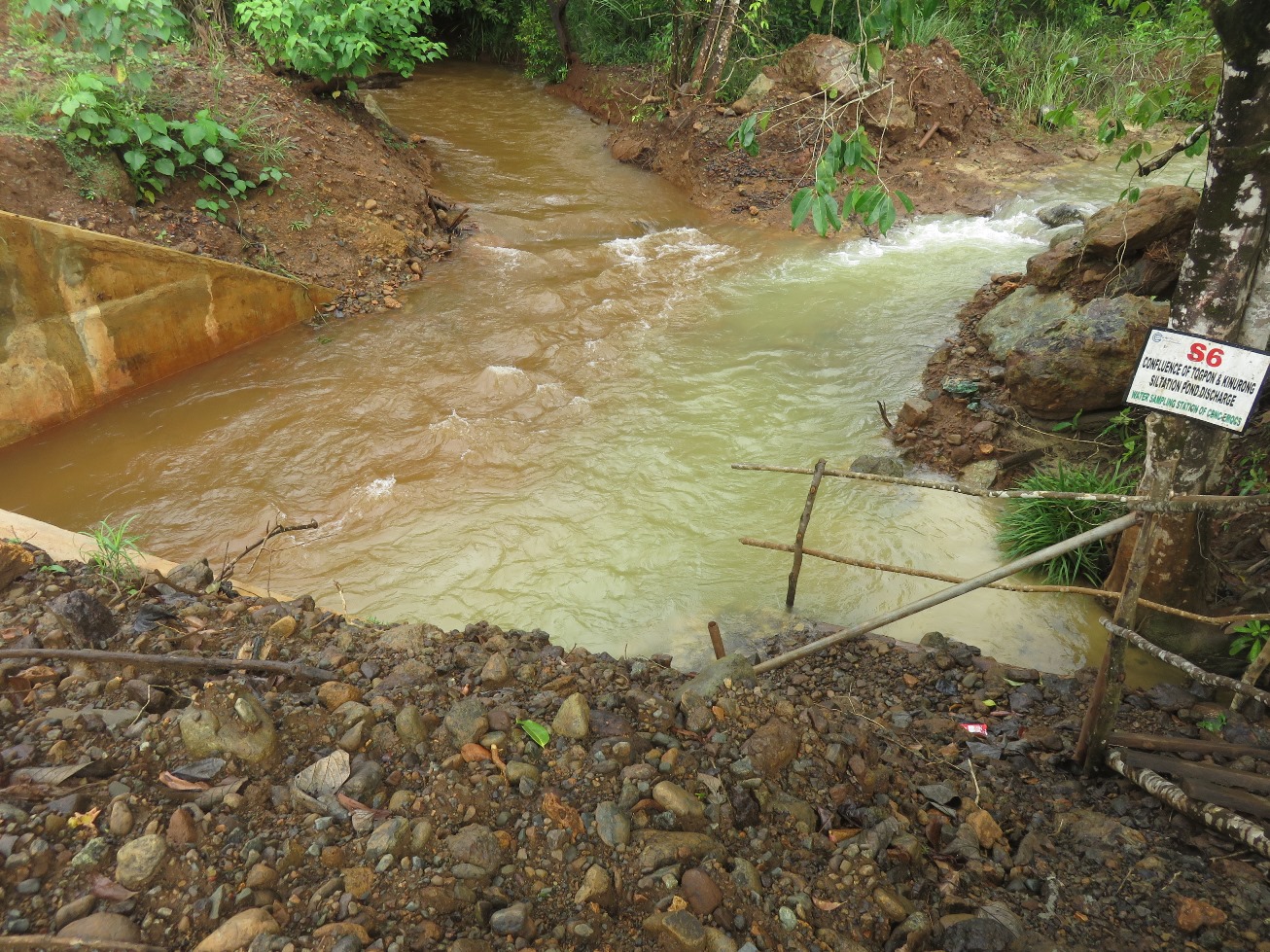 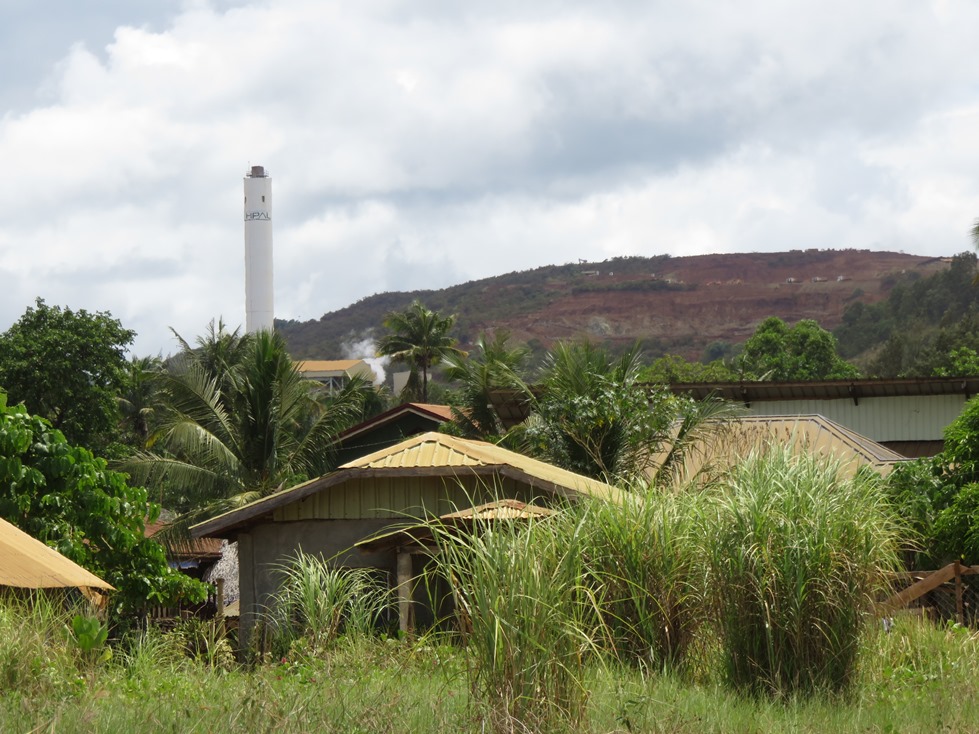 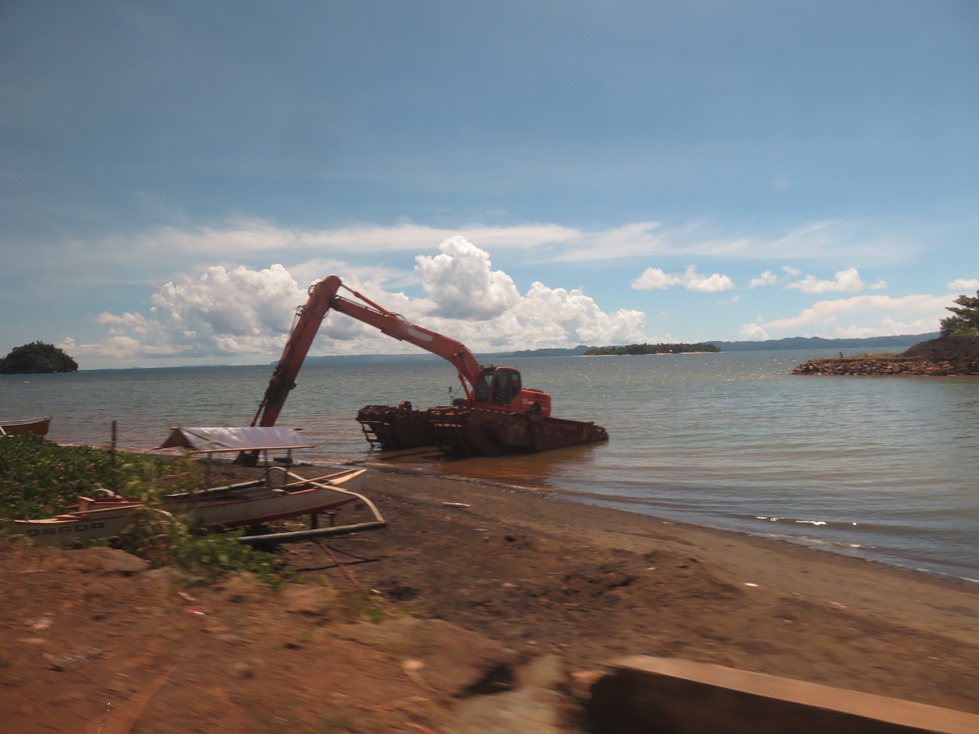 Taganito River whose water coming from Taganito mining area. In the mouth of the river, the company has been dredging the siltation. (May 2018)
All photos’ credit: FoE Japan

The results of our water quality analysis for 10 years in Rio Tuba have proved that Cr (VI) in the Togpon River almost all the time in the rainy season exceeded the environmental standards in Japan, or “Environmental Quality Standards Concerning the Protection of the Human Health” (not exceeding 0.05 mg/L) (Refer to Table 2 below).

(Remarks: The figures in boldface are the water samples which exceeded the environmental standards in Japan, or “Environmental Quality Standards Concerning the Protection of the Human Health” (not exceeding 0.05 mg/L))

In our water quality analysis in the dry season (April) of 2018, Cr (VI) was not over the environmental standards in Togpon River, which is the same result of the previous dry season. Thus, the expert pointed out, “With the result this time, it is reconfirmed that hexavalent chromium is liquated by rainfall in the mining and the processing plant areas.” (Refer to the document on the result for more details.)

According to a Japanese company concerned, the project owners had started to take mitigation measures against Cr(VI) flowing out since 2012, such as covering the nickel ore stockpile with canvas sheets, excavating the siltation pond, and putting activated charcoal around the exit of siltation pond liking to Togpon River. No change, however, has been seen since 2012 in the tendency that Cr(VI) exceeds the Japanese environmental standards in the rainy season. It is highly questionable whether their anti-pollution measures are effective.

Togpon River crossing under the main road is relatively accessible by the local community, including children. From the viewpoint of preventing the damage to the local people’s health, the project companies should accept the NGO's proposal for the joint investigation regarding the water quality, aiming at searching the pollution mechanism, so that they can develop the drastic anti-pollution measures. Immediate and wise decision by the project companies is expected. 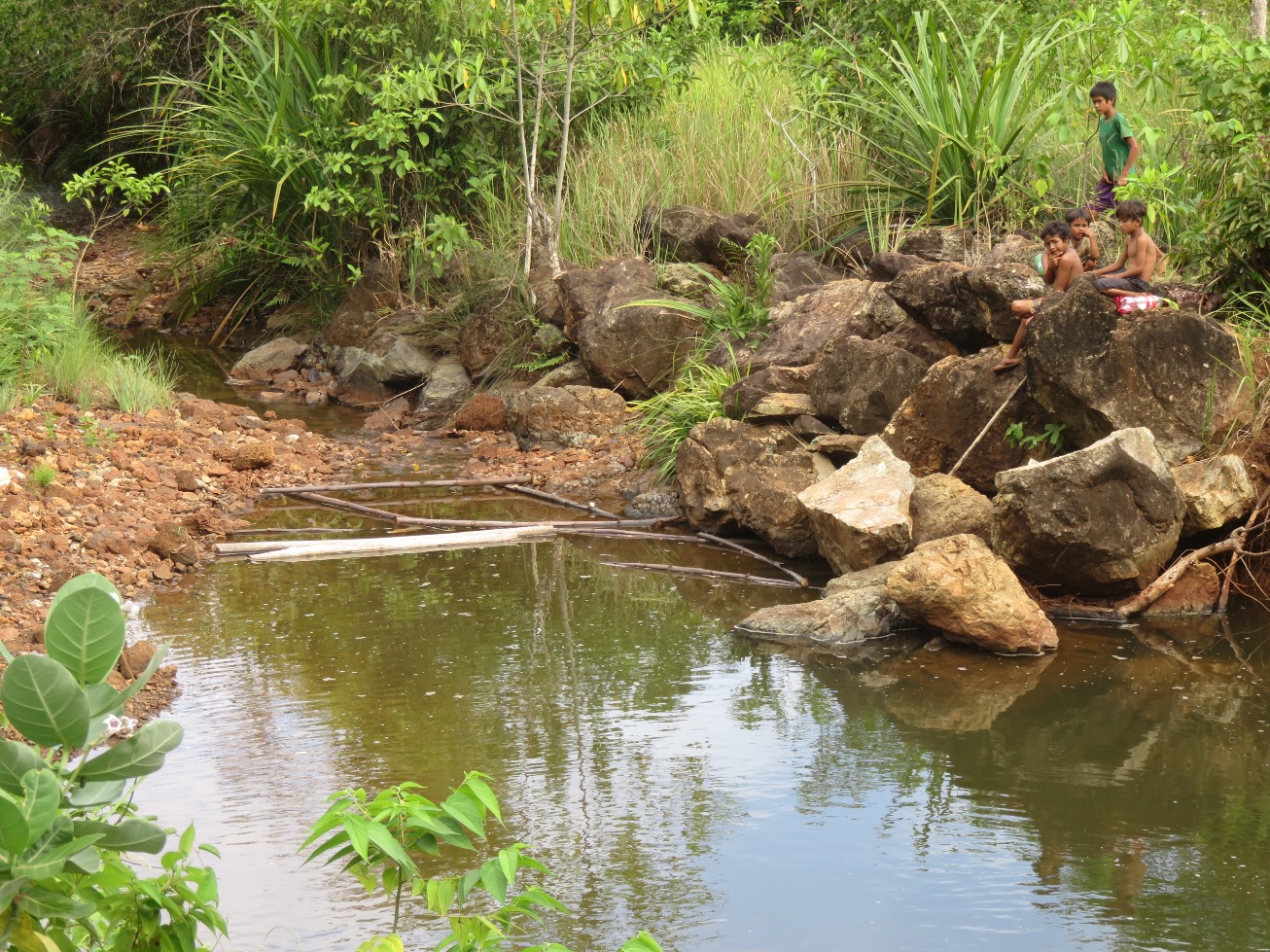 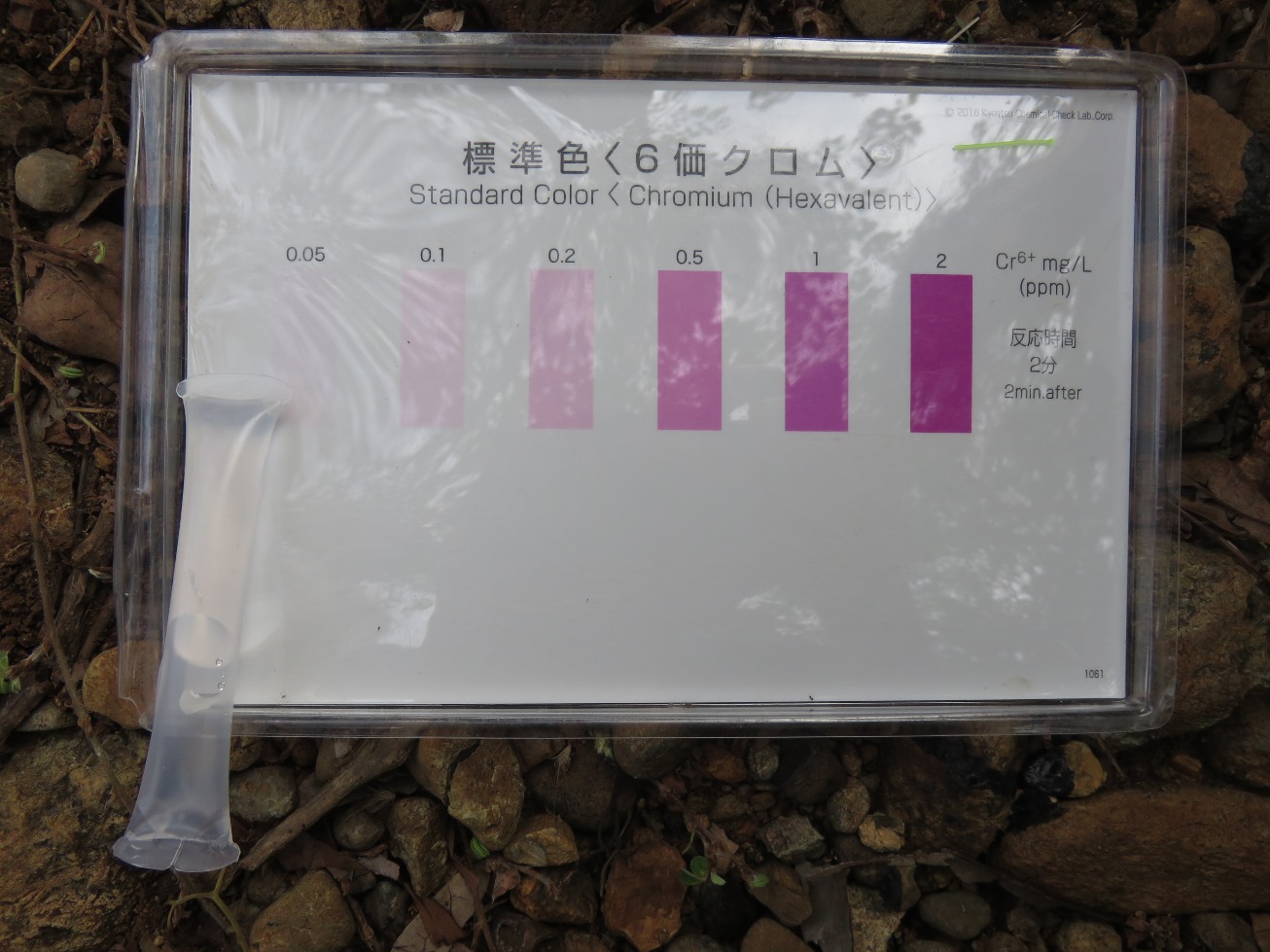 > Please see the detailed result and comments of the latest water analysis (in April 2018) by the expert at the following link;

This has been the first follow-up investigation in Taganito since February 2013. In the analysis 5 years ago, Cr (VI) was over the Japanese environmental standards (not exceeding 0.05 mg/L) in the two rivers, namely Hayanggabon River and Taganito River. In addition, it is pointed out that the water, which has been continuously contaminated by Cr (VI), has been used by the Indigenous Mamanwa people in the resettlement site as domestic and drinking water.

In our water quality analysis in May 2018, Cr (VI) still exceeded the environmental standards in Taganito River (0.15 to 0.2 mg/L), while the detected amount of Cr (VI) has reduced in Hayanggabon River where the highest figure of Cr (VI) was detected in the last analysis in 2013.

In the resettlement site of the Indigenous Mamanwa people, Cr (VI) exceeded the Japanese Water Supply Act as well as the Japanese environmental standards (0.05mg/L) in the spring water near the sea area, which around 30 households have been using as domestic and drinking water for almost 2 years. Also, Nickel (Ni) was over the Control Target under the Japanese Water Supply Act (0.01mg/L) in the other spring water, which can be taken along the main road near the resettlement site, as well as in the said spring water. (Refer to the document on the result for more details.) According to the local community, although the THPAL Nickel Co. regularly provides the drinking water, it is not enough for the daily life of the whole family members.

The expert pointed out, “The relevant companies, including Sumitomo Metal Mining Co. (SMM), need to take immediate measures against such water contamination, given that the local community has been using those spring water for drinking. According to a Japanese company concerned, the project company is planning to rehabilitate the water supply system in the resettlement site soon, which has been broken. It is needed to take immediate actions and solutions based on each community’s requests, and each relationship etc.

Further, the expert made a comment, “These results have proved that serious contamination by hexavalent chromium has been occurring in shallow underground water, which the local community is using for domestic and/or drinking purposes, in the whole area of Taganito, Surigao del Norte,” and thus, “the appropriate measures must be established and implemented as quickly as possible in Palawan as well as Surigao del Norte, as there are concerns over the health damage of the local communities and the destruction of ecosystem in bays and coastal areas. If any appropriate measures could not be established, it should be taken into account to suspend or stop the projects.”

In Taganito, though not only Japanese companies but also the other ones, such as Chinese, have been engaging in nickel mining projects, Japanese companies, in cooperation with the other companies, must take immediate measures, such as investigating the mechanism of water contamination by Cr (VI) and the environment destruction, and establishing / implementing the effective anti-pollution measures. 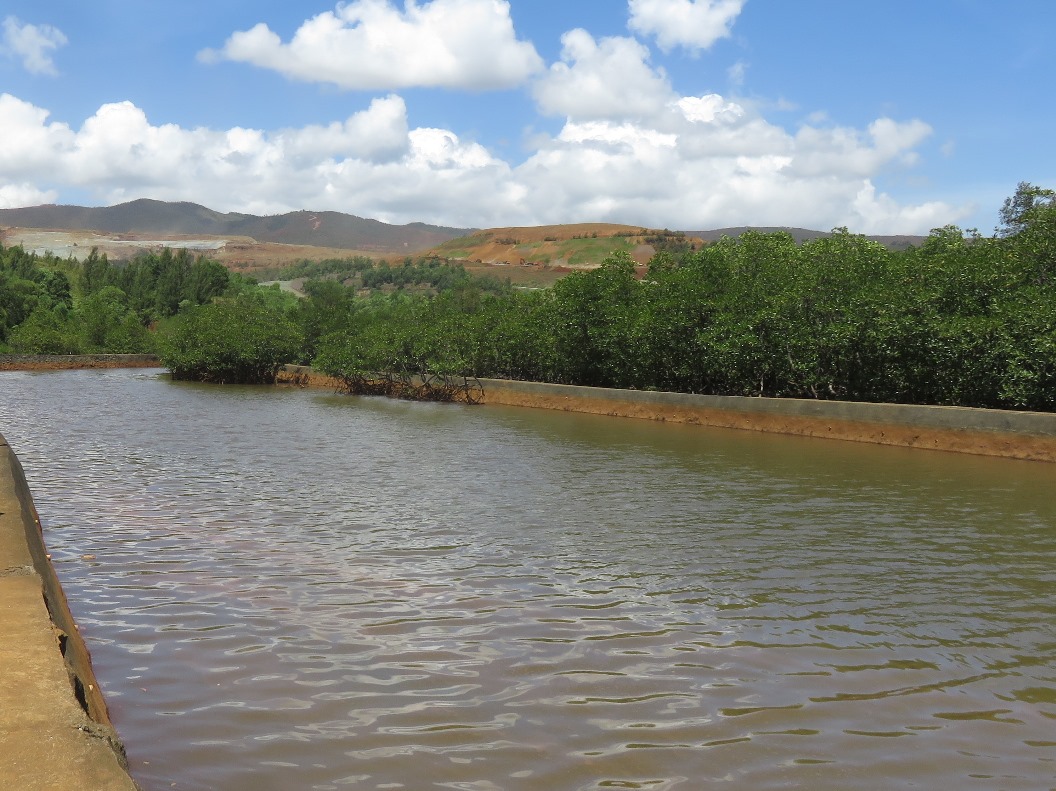 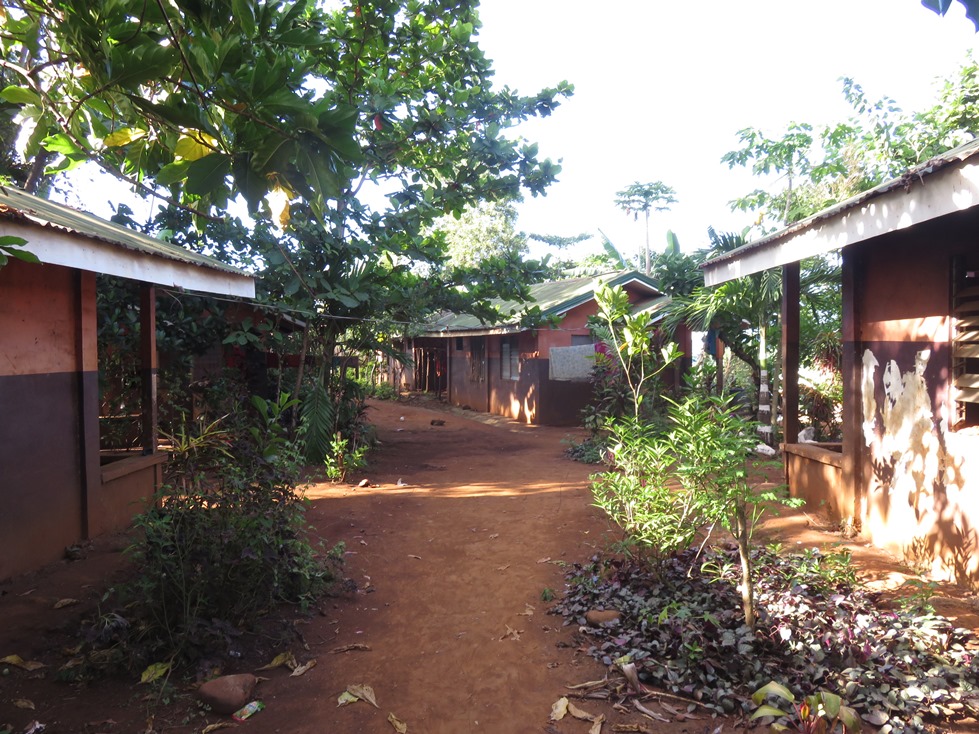 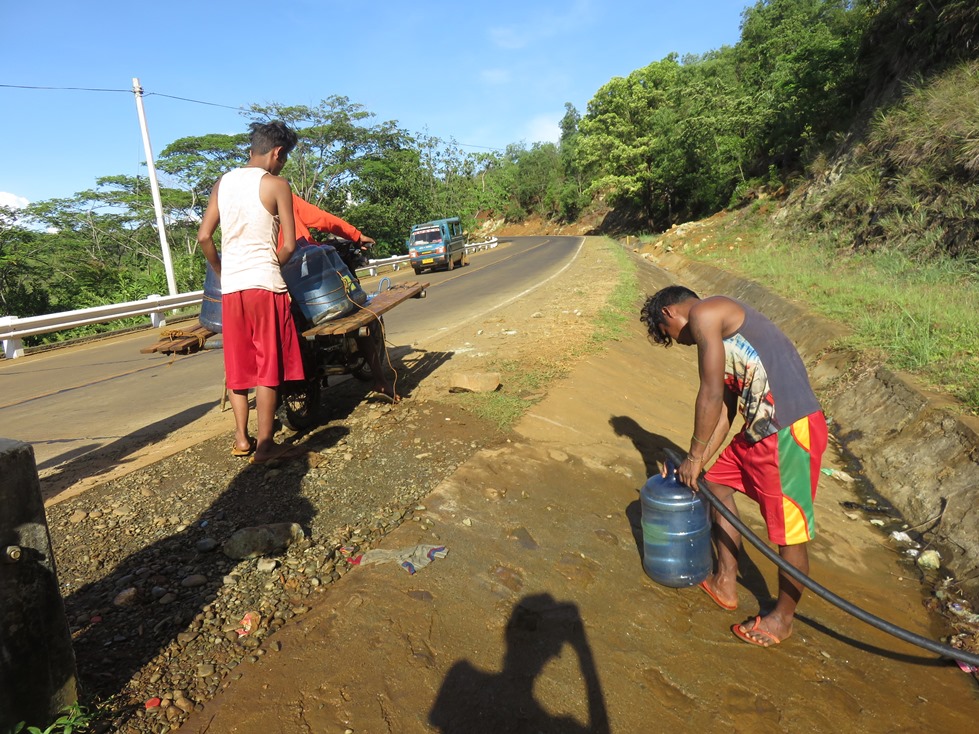 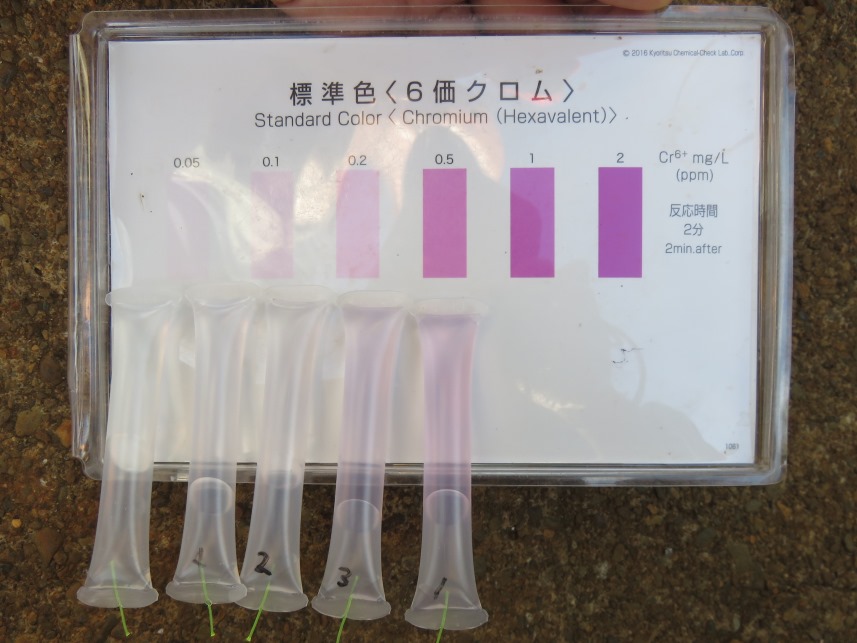 Left Photo: No. 4 location point. The Indigenous Mamanwa People is taking water along the main road near the resettlement site.
Right Photo: The result of examination by simple detector tube for Cr (VI). From the left side, the samples of mineral water (no detection), No 4 sample or water taken along the main road, (Trace), No2 sample or Hayanggabon River (Trace), No 3 sample or spring water taken near the sea area in the resettlement site (0.075 mg/L), and No 1 sample or Taganito River (0.15 mg/L) (May 23, 2018)
All photos’ credit: FoE Japan

> Please see the detailed result and comments of the latest water analysis (in May 2018) by the expert at the following link;

- The Result of Water Analysis surrounding the Nickel Mining Sites and the Nickel Processing Plants in Taganito, Surigao del Norte in May 2018 (by Mr. Junichi Ohnuma, Former Lecturer of Kinjo-gakuin University / Former Lecturer of Chubu University / Former Principal Investigator of Environmental Investigation Center in Aichi Prefecture)
(Dates of Water Sampling: May 23 and 34, 2018)
- Map of Locations of Water Sampling in Surigao del Norte (May 2018)