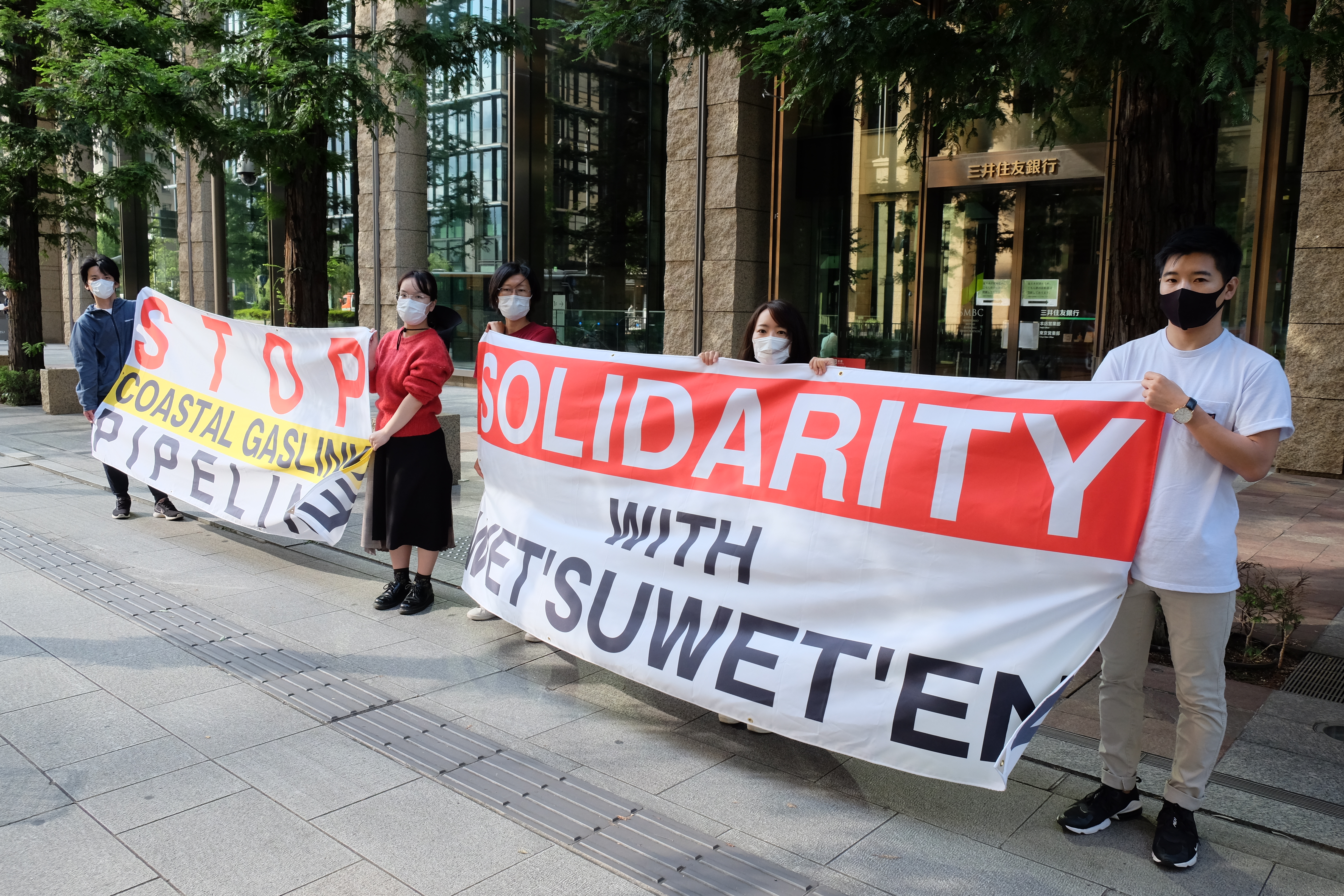 We stand in solidarity with the Wet’suwet’en First Nation who are fighting to protect their land, culture, water and history. We also call on companies and private banks involved in the gas development projects that destroy and infringe on the rights of Indigenous Peoples to respect the rights of Indigenous Peoples and to immediately stop their projects, and on the governments of Canada and Japan to immediately stop public support for these projects.

A series of gas development projects is currently underway in British Columbia, Canada. The LNG Canada project invested by companies like Mitsubishi Corporation and Royal Dutch Shell plans to construct liquefaction plants and an export terminal. Shale gas used for the project will be fracked in the Montney Formation in British Columbia (BC) and transported through a 670 kilometer Coastal GasLink pipeline to the terminal in Kitimat, where the gas will be liquefied and exported to Asian markets.
The Japan Bank for International Cooperation (JBIC), a Japanese public financial institution, is currently considering financing the LNG Canada project. Japanese private banks are also expected to provide co-financing but it is yet not clear which bank will do so. However, considering the fact that the three major Japanese banks have already been financing the Coastal Gaslink pipeline project, there is a possibility that they will provide financing for the LNG Canada project as well.
The Coastal GasLink pipeline company is pushing ahead with the pipeline, ignoring the rights of Wet’suwet’en. In August, they began construction on the site of Wet’suwet’en without their consent, and their archaeological inheritance was removed without their consent. Although Coastal GasLink claims to have obtained a Site Alteration Permit (SAP), Wet’suwet’en have not agreed to this land alteration, which is nothing less than a significant destruction of their land, culture and history. This is a clear violation of Article 11 (Right to Cultural Tradition and Custom) of the United Nations Declaration on the Rights of Indigenous Peoples (UNDRIP), which has also been adopted by the Canadian government(1).

Coastal GasLink is currently preparing to drill under the Wedzin Kwa (Morice river). The Wedzin Kwa is an important source of water for Wet’suwet’en and all living creatures. In order to protect the earth, culture, water and history, Wet’suwet’en, Indigenous Peoples who support the struggle, and supporters who have come from all over the country, are continuing to protest the development without violence. Solidarity actions have also taken place across Canada.

Meanwhile, a local police force (RCMP) dispatched to the site is trying to forcibly remove Indigenous Peoples and supporters from opposing activities. RCMP members have been harassing protesters by deliberately draining water from storage tanks in the Coyote Camp and by threatening to arrest them. In fact, some people have already been arrested(2).

Wet’suwet’en, which is directly affected by the Coastal GasLink pipeline project, has never given up their land, and in 1997 the Supreme Court of Canada ruled that the ownership and use of land belong to Indigenous Peoples (Delgamuukw case)(3).

On December 13, 2019, the UN Committee on the Elimination of Racial Discrimination also adopted a resolution calling on the federal government to immediately halt the Coastal Gaslink pipeline project, the Trans-Mountain pipeline project and the construction of Site C Dam until a "Free prior, and informed consent (FPIC)" obtained. In other words, it has been pointed out internationally that FPIC has not been obtained for these projects.(4)

We cannot overlook the fact that the rights of Indigenous Peoples have been violated and that protestors who claim their legitimate rights to protect their precious land, culture, water and history have been unfairly suppressed. Companies and banks involved in the business should respect the rights of Indigenous Peoples and withdraw from the business in accordance with international standards and their respective human rights policies.

Footnotes:
1: Article 11 of UNDRIP states, “(1) Indigenous Peoples have the right to practice and revitalize their culture, traditions and customs. This includes the right to maintain, protect and develop the past, present, and future manifestations of their cultures such as archaeological and historical sites, sites designs, ceremonies, technologies and visual arts and performing arts and literature. (2) States shall provide redress through effective mechanisms , which may include restitution, developed in conjunction with Indigenous Peoples, with respect to their culture intellectual, religious and spiritual property taken without their free, prior and informed consent or in violation of their laws, traditions and customs.”
2:https://twitter.com/Gidimten/status/1447286562006388739?s=20, #AllOutForWedzinKwa
3:“'We still have title': How a landmark B.C. court case set the stage for Wet'suwet'en protests”,https://www.cbc.ca/news/canada/british-columbia/delgamuukw-court-ruling-significance-1.5461763, CBC News 13th Feb 2020
4:Committee on the Elimination of Racial Discrimination “Prevention of racial discrimination, including early warning and urgent action preceedure” https://tbinternet.ohchr.org/Treaties/ CERD/Shared%20Documents/CAN/INT_CERD_EWU_CAN_9026_E.pdf?_ga=2.171294304.1158930249.1618 324061-1016472279.1618324061, 13th Dec 2019